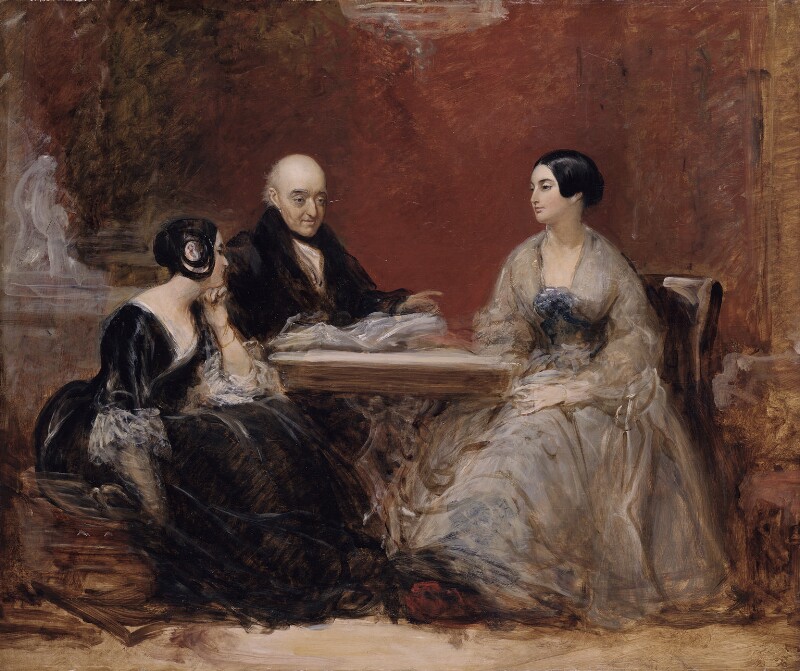 The picture represents Mrs Phipps on the left, Samuel Rogers in the centre and Caroline Norton (later Lady Stirling-Maxwell) on the right. Its early history is unknown. The fact that it remained unfinished, and that it was painted at a time when Stone had largely given up portraiture, suggests that it was a spontaneous and informal sketch, rather than a commissioned work. The attribution to Stone rests on tradition, but is very credible, and accords well with his style. The date is based on costume. A small oil sketch of Rogers by Stone (15 x 12 inches (381 x 305 cm)), very close in pose and features to the NPG portrait, is in the collection of William Marshall, sold from the Burdett-Coutts Collection, Christie's, 4 May 1922 (lot 240). Stone is known to have been friendly with Rogers (they were probably introduced by Dickens), while Caroline Norton was an old friend of the poet. Mrs Phipps had married Caroline Norton's brother-in-law, the Hon Charles Francis Norton, in 1831. Following his death in 1835, she married the Hon Edmund Phipps, son of the 1st Earl of Mulgrave, in 1838.