1 of 3 portraits by Frederick Richard Pickersgill 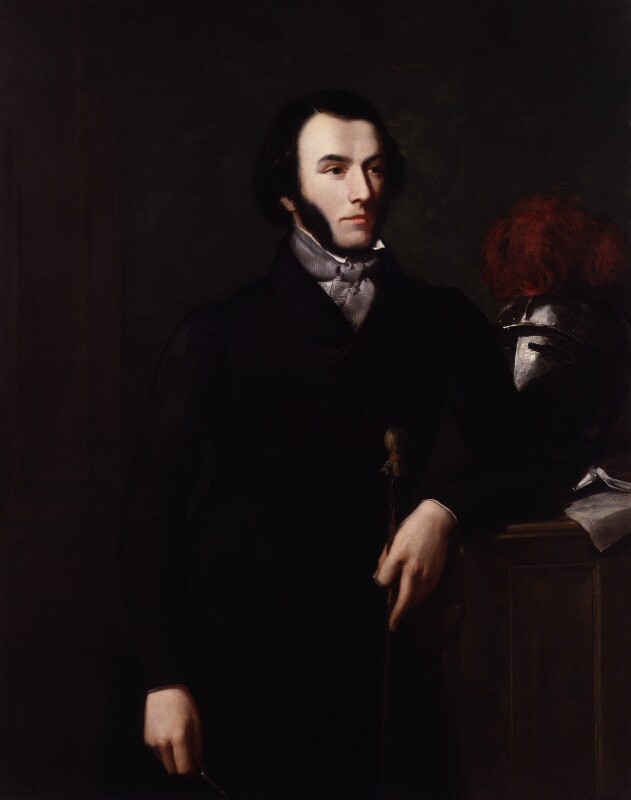 There are two known likenesses of Pickersgill in oils; this early self-portrait and another he completed some forty years later, now in Aberdeen Art Gallery. By the time of this work, Pickersgill had already been elected ARA (1847) at an unusually early age, as well as gaining first prize in the competition for frescoes depicting British history in the Palace of Westminster. [1] His self-portrait would seem to express the confidence of this success, offering a somewhat conventional but handsome representation of an ambitious young artist holding paintbrush and maulstick. On the plinth behind stands a plumed helmet, a common studio prop but also historically allusive of victory and nobility.

Writing in 1850 about the Westminster competition, the Art Journal numbered Pickersgill as among those who ‘girded their armour for the coming contest in this peaceful warfare … but the campaign was delayed for a year and the troops went into quarters, the palette and pencils were laid aside by some, and devoted to other purposes by others’. [2] Curiously or coincidentally, this metaphor became visible in the stage armour donned by Pickersgill when sitting to David Wilkie Wynfield see NPG P82. The article contained a wood-engraving bust portrait of Pickersgill apparently drawn from the self-portrait, indicating that this was executed before 1850; if engraved elsewhere, no record has yet been found. Although Pickersgill continued to exhibit for thirty years, this period represents the high point of his career.

The precise provenance remains unclear, but the last recorded owner was the Hon. Lady Benthall, born Ruth Cable, daughter of Ernest (later Lord) Cable and granddaughter of Mrs G.H. Cable, born Emily Maria Pickersgill. Although Emily cannot have been F.W. Pickersgill’s daughter (she was married by 1859, when he himself had been married for only twelve years), a family link seems likely.

Three-quarter-length to right, left elbow on plinth, helmet with plumes in background.