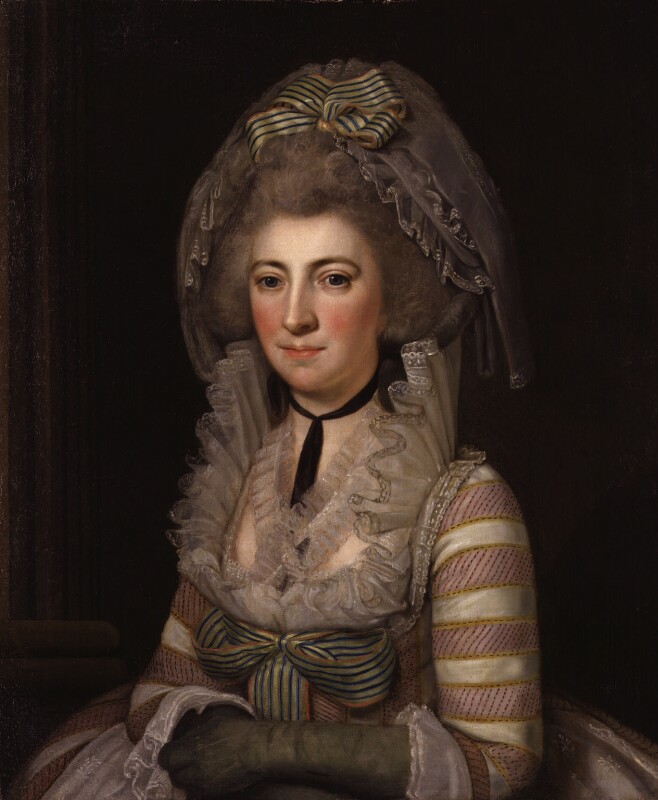 Mrs Piozzi and her husband were in Italy from October 1784 to September 1786; from 24 October to November 1785 and 27 February to 19 April 1786 they were at Rome, where they sat for their portraits. [1] NPG 4942, a pedestrian work, was apparently one of these, and the pendant portrait of Gabriel Piozzi may be identified with that now in the Hyde Collection. [2] While these portraits descended through the Salusbury-Piozzi family in England, another pair were left behind in Italy, and were last recorded in the collection of Enrico Piozzi at Brescia in 1892. [3] Mrs Piozzi’s description of her Roman portrait seems more appropriate for the latter; she told her daughter: 'We sate for our Pictures in Rome as I said I would - but such Objects! mine particularly, that I have done nothing but beg they might be burned ever since; as a Red-haired old Hag in a white Bedgown, is neither 'Ornamento' of one Country, nor 'Grazia' of another'. [4]

Grey hair, grey-blue eyes, fresh complexion; she wears a dormeuse cap, a ribbon in her hair and at her waist with blue and black stripes and red edges; a standing collar of silk gauze à la Médici, with a black silk ribbon at her neck; her silk dress is striped with pink-banded yellow-edged panels and she has black net gloves.1