1 of 881 portraits by James Gillray 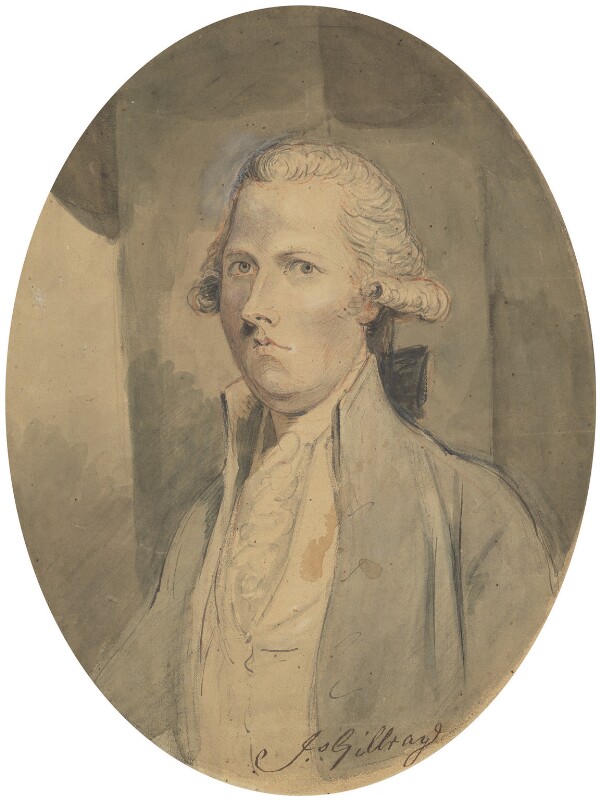 The drawing seems to have been the result of a contract between Gillray and the publisher S. W. Fores, signed and witnessed on 26 June 1788, in which they agreed to share the profit and loss of an etched plate of Pitt, Fores to pay Gillray 30 guineas in advance and Gillray to 'Paint, Engrave and finish the said Plate as soon as he possibly can with his name thereto affixed as the Painter & Engraver thereof'. The plate appeared in February 1789 but became the subject of a quarrel between the two resulting in the cancellation of the contract and the publication by John Harris of the head and shoulders versions in April and May (Draper Hill, Mr Gillray, 1965, pp 31-3). Gillray continued to produce a series of Pitt satires culminating in 'An Excrescence …' in which he appears as a toadstool encroaching on the Crown 1791, 'The Bottomless Pitt' of 1792, a jibe partly at Pitt's physical appearance and partly at the National Debt, and in 1797 the magnificent 'Giant Factotum' showing him astride the Speaker's Chair dominating the House of Commons.

Head and shoulders to left in pale blue-grey coat with high collar, white cravat and frilled shirt; grey eyes, hair curled in queue tied with black bow. Pencil sketches on back, across the paper and cut off at ears and nose, are inscribed: William Pitt, drawn by Jas Gillray (?) 1789).

Large oval etching by Gillray published 9 April 1789 by John Harris and re-issued 28 May 1789 with coat of arms and motto added and slight variations in coat and shirt-frill (impressions in NPG Works of Gillray, I, 125-6); a three-quarter-length variant with the same head but body turned to right, hand on papers marked 'Annual Reduction of the National Debt' and 'Regulation of the Slave Trade' was published by Gillray and S. W. Fores 20 February 1789 (British Museum impression reproduced in Draper Hill, Mr Gillray, 1965, plate 24).