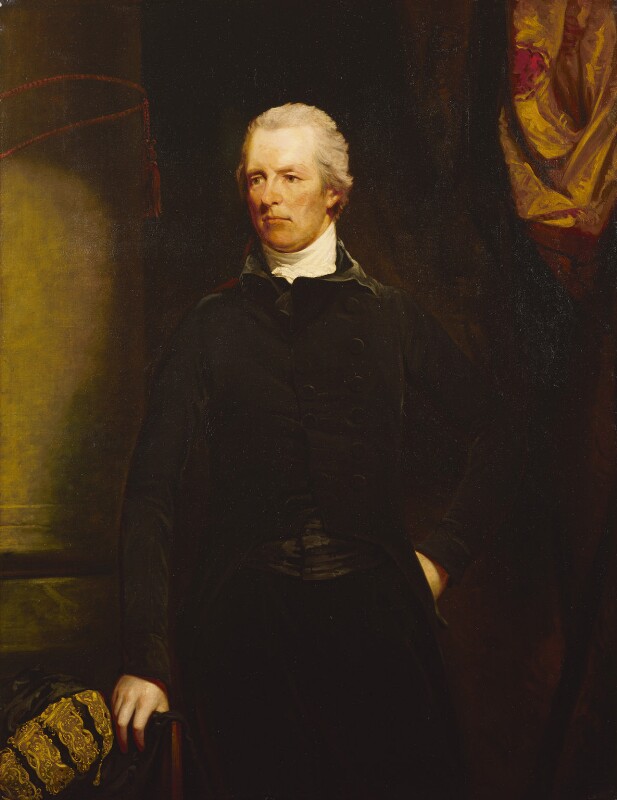 Tate 2018; on loan to the National Portrait Gallery, London

Hoppner's original portrait of Pitt was commissioned by Lord Mulgrave and begun in December 1804 (Diary of Joseph Farington, 24 December 1804). As a boy Mulgrave's son Lord Normanby saw Pitt sitting for it in Hoppner's studio: 'It had not been sent home when Pitt died (Clint had been engraving it). Then came applications from the most intimate friends of the deceased statesman for copies. All those made before the original was sent home were by express permission of Lord Mulgrave. After that I know copies of copies were multiplied to any that wished them. My picture went home before the end of 1806 and has never been away since then' (letter from Lord Normanby to Lord Stanhope 2 May 1862 in Mulgrave Castle archive). The Mulgrave original, later in the Burdett-Coutts sale Christie's 4 May 1922 (33) and now at Cowdray Park, is inscribed on the back: This original picture painted from the life by John Hoppner is a most accurate and impressive likeness of that unequal [?] statesman and entirely faultless man William Pitt./This portrait was finished on the 28th October AD 1805. He died January 23rd 1866. Mulgrave (copy from back of Picture)/Marquis of Normanby Mulgrave Castle (photograph in NPG).
Owen described this portrait to Farington as Hoppner's best work but expressed some surprise at so much hauteur and disdainful severity, usually softened by other artists. Owen also commented on Pitt's nose which he said did not turn up at the end but was of a fine form resembling his father Lord Chatham's nose which was aquiline (Diary of Joseph Farington, 15 March 1806). George Dance on the other hand said 'He should not have known it to have been intended for Mr Pitt' (ibid. 6 June 1807) and Wilberforce said it had been painted 'at a period too late to give an adequate representation of Him' (ibid. 19 July 1806). The demand was enormous and in no time Hoppner had 20 copies bespoke, the Russian Ambassador offering 'any money provided it be executed by Hoppner's own hand' (ibid. 15 March 1806).
Copyists usually associated with Hoppner's Pitt are R. R. Reinagle and Samuel Lane, either of whom could have painted the NPG copy which is of good quality. Reinagle is believed to have painted 13 half-lengths and 4 whole-lengths, taking 20 guineas each while Hoppner himself took 80 guineas (William T. Whitley, Artists and their Friends in England 1700-1799, 1928, I, p 16 and Diary of Joseph Farington, 22 June 1806). Lane had already been taken on by Hoppner to copy his portrait of Nelson for King's Lynn and was at work on copies of Pitt early in 1807. Copies by Rising and Jackson are in the Palace of Westminster.

(Of the original)
Mezzotint by George Clint 1806, and others.