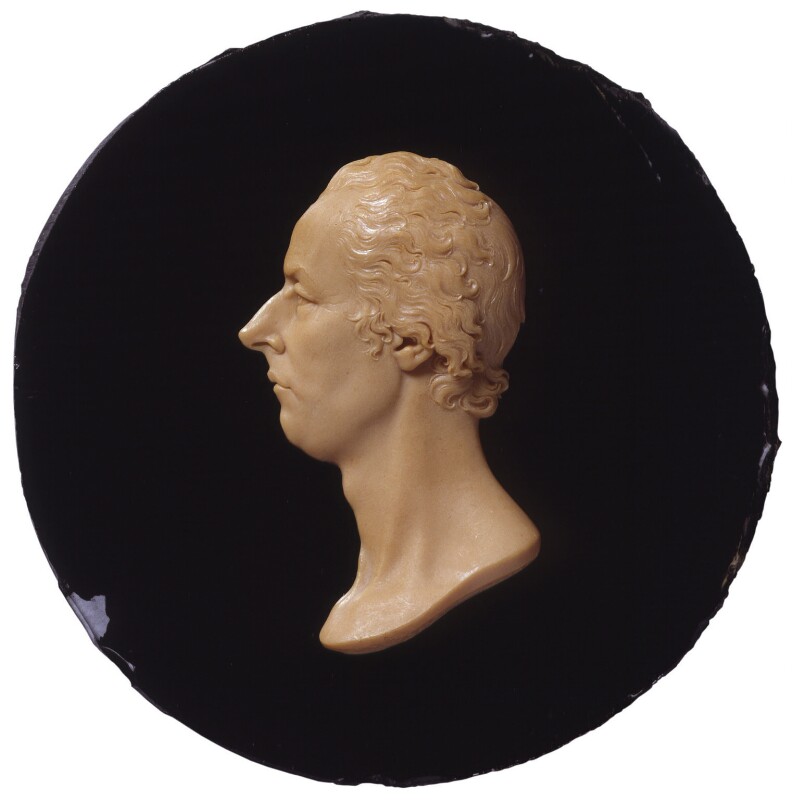 Incised on truncation: P. Rouw/1809 London and inscribed in ink as a trade label on back: Peter Rouw/Sculptor Modeller/of Gems to his R.H. the Prince of Wales/Upper Titchfield St/or Portland Road/London/1808.

The profile appears to be an exact copy from the bust by Nollekens who was a friend of Rouw and left him £100 and a slab of marble in his will. An earlier impression dated 1808 is in the V&A Museum (Mary Bate collection) and one was exhibited RA 1809 (677).
An almost identical profile by Catherine Andras at Chevening, modelled in pink wax on a black background, is inscribed on the back: Portrait of the Right Hon. William Pitt modelled from the bust by Nollekens by Miss Andras, Modeller in Wax to Her Majesty 87 Pall Mall. Executed for Lady Hester Stanhope and placed by her in her sleeping apartment at Djour in Syria. Purchased at the sale of her effects in Syria 1840. Presented to Earl Stanhope 1863.
A cast of a seal in the NPG Reference Collection bears a closely related profile to both the Andras and Rouw works. The profile was used again by Thomas Webb for a commemorative medallion 1806, and by Wyon for the Manchester Pitt Club badge 1813 (Country Life, September 1943, p 473).

Given by Francis Wellesley 1915.