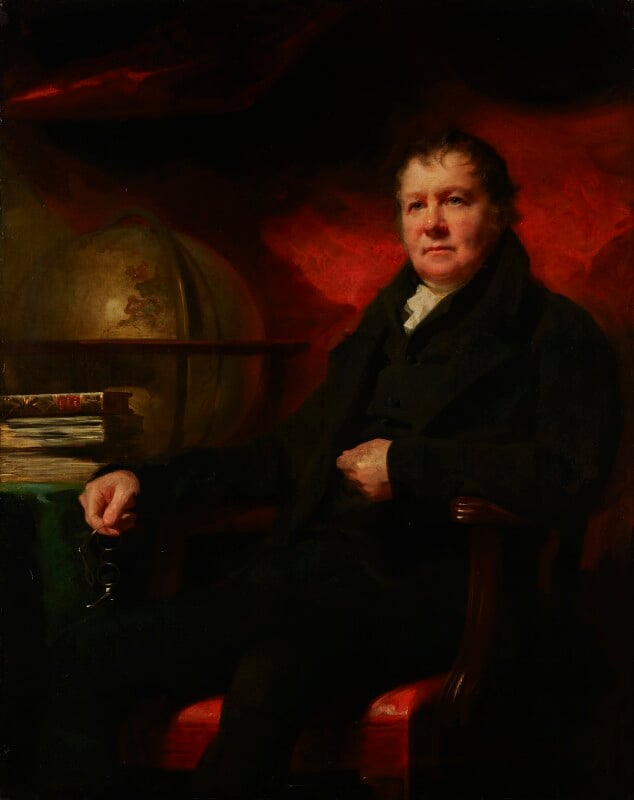 Raeburn painted two versions of this portrait of which Armstrong believed the original to be that now in the University of Edinburgh collection, painted for Playfair himself and bequeathed to the University by his daughter, Miss Margaret Playfair, in 1857. It may have been one of three Raeburn portraits of Playfair circulating in 1815 - at the RA number 277 and in the Edinburgh Exhibition number 83; it was certainly in Second Exhibition of National Portraits, South Kensington, 1867 (851) and Raeburn Exhibition 1876 (85), lent to both by the University (David Talbot Rice & Peter McIntyre, The University Portraits, Edinburgh, 1957, 109, reproduced plate 4).
The NPG version is slightly looser in painting, two of the books being rapidly sketched though the upper book is more finished but not to the extent of the title's legibility; the globe is set higher and with more prominence than in the Edinburgh portrait. It was probably a model kept in the studio for future use and remained there till his death. His family lent it to the Raeburn Exhibition in Edinburgh 1876 (177) and it was bought by the Duke of Somerset at Christie's Raeburn sale in 1877. It was acquired by the NPG from the Duke's sale in 1890 and curiously enough another version, probably studio, was at Christie's sale of different properties 11 June 1920 (105).
A different type of Raeburn portrait in the Marquess of Lansdowne's collection, was painted at about the same time and may also have been the picture exhibited RA 1815 (277). It was lent by the Marquess to the 'First 100 Years of the Royal Academy', RA, 1951-2 (219), having been bequeathed by Lady Davy (widow of Sir Humphry) to the 3rd Marquess of Lansdowne in 1855. It was engraved by R. Cooper, half-length only, 1 April 1816, for Cadell & Davies, Contemporary Portraits, II, 110, and also adapted by Stewart from a drawing by 'P.M.' for Lockhart's Peter's Letters to his Kinsfolk, 1819, vol.I, and by an unknown stipple engraver for William Darton. The pose is similar to the other two portraits but reversed - he sits to the right holding spectacles, with books, microscope and specimens on a table to right.

Etching slightly varied, with glasses on his face, signed and dated: W N ft./1819, among a number of William Nicholson etchings adapted from Raeburn portraits.