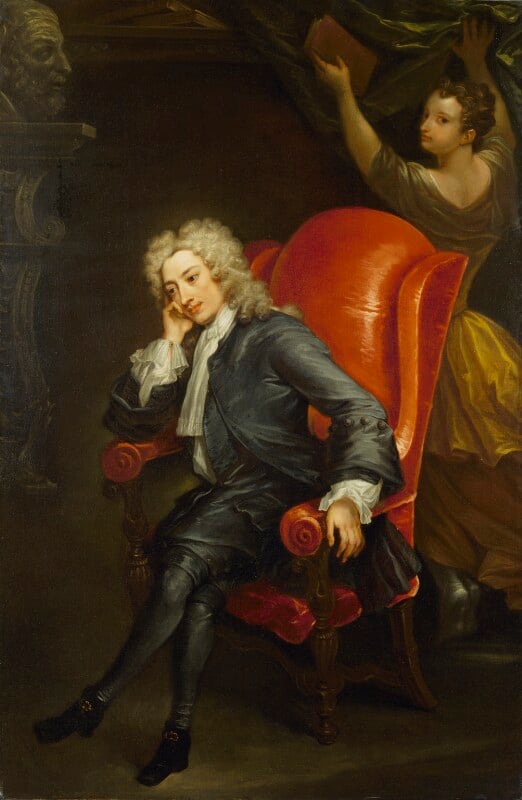 The portrait, on twill canvas, is somewhat coarsely painted and is not perhaps the first version. The perspective of the chair is out of drawing, the cut of the suit in the lap, difficult to follow and the legs, though characteristic, seem disproportionately small. It is arguable that the picture was intended to be seen from below and the distortion therefore deliberate. The female figure, according to Scharf, is probably Martha Blount or possibly Pope's sister-in-law Mrs Rackett. [1] However, a comparison with portraits of the former is not conclusive and no portrait of the latter is recorded. The figure may well be allegorical. Wimsatt draws attention [2] to the resemblance between the bust and Jervas's drawing of the head of Homer in the Villa Farnese, engraved by Vertue as frontispiece to the first edition of Pope's translation of the Iliad, 1715. It is reminiscent of the bust of Homer by Bernini, probably a renaissance copy, now at Scone, bequeathed by Pope to William Murray, 1st Earl of Mansfield [3] (see also Richard Mead, NPG 15).
The authorship rests mainly on style. Attribution to Jervas was first published, 1819, when an engraving by Robinson (F. O'Donoghue and Sir Henry M. Hake, Catalogue of Engraved British Portraits ... in the British Museum, 1908-25, 6), showing the sitter in the same pose, appeared in Targini’s translation of Essay on Man. A similar whole length in the Proby collection, Elton Hall, is believed to be the portrait which Pope presented, c.1727, with a set of his Odyssey, [4] to his friend William Cleland (1674?-1741), one-time commissioner of customs in Scotland, and of taxes in England. Cleland was related through his wife's family to John Proby, 1st Baron Carysfort. Neither NPG 112 nor the Proby oil is signed or dated. A head and shoulders engraved, 1781, by James Caldwall and inscribed Jarvis Pinxt. is possibly a free adaptation of the NPG type. A portrait with face mask reversed, similar to the Robinson engraving and evidently completed by the autumn of 1714 when Pope's correspondence first refers to Vertue working on an engraving of it, was presented, 1722, to the Bodleian by Edward Harley, Earl of Oxford, who had probably purchased it from the estate of Matthew Prior. [5] Published, 1715, without date or painter's name, it appears in Vertue's list of that year.
Pope maintained a long and close relationship with Jervas with whom he took painting lessons in the early summer of 1713 and whose London home he used as an address until as late as 1726. [6] Both on apparent age and costume, and from Robinson's advertisement of his engraving 'executed at an early period of his life, by his friend Jervas', [7] NPG 112 must date from near the beginning of the friendship.
An anonymous black chalk drawing inscribed with Pope's name in an old hand, now in the Henry E. Huntington Library and Art Gallery, seems likely to be correctly named; it may possibly prove to be by Jervas or by Richardson, [8] and may be related to NPG 112.

Bought, 1860, together with Christopher Wren by Kneller (NPG 113), from J. Mathews of Edgbaston House, Birmingham; owned, 1819, by George Watson Taylor, MP, and bought at the sale of his property, 24 July 1832, lot 92, by a Mr Swabey; subsequently in the collection of Edward Copleston, Bishop of Llandaff (d. 1849), and sold, 1850, by Toplis & Harding of St Paul's Churchyard to W. White, printseller of Brownlow Street, Holborn, by whom sold to J. Mathews; earlier history not known.