10 of 389 portraits matching these criteria: 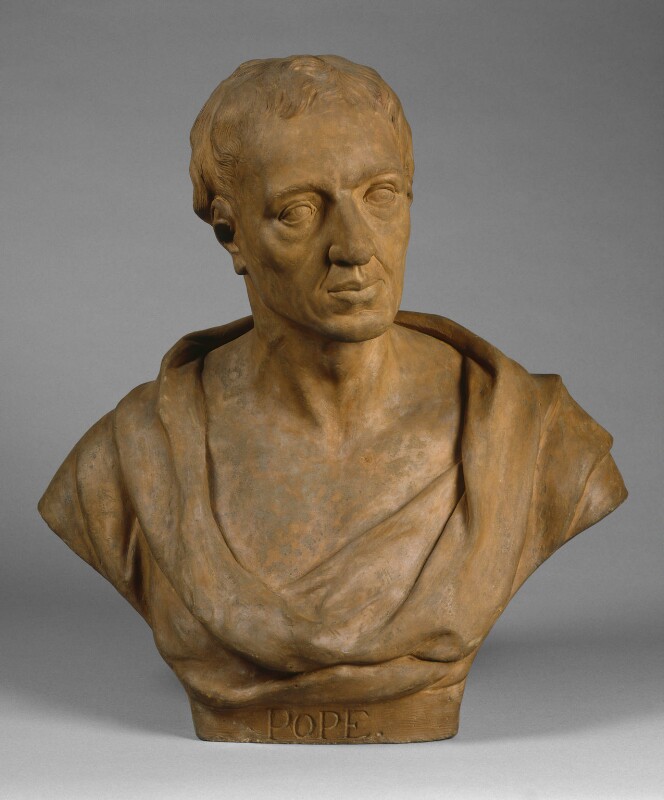 Base, of one piece with the bust, incised POPE.

Although evidently inspired by Roubiliac, NPG 2483 is neither a close nor faithful copy of any of his busts. [1] On stylistic grounds it is likely to be a late, possibly 19th century, work. Vertue, 1741, records: 'Mr. Rubbilac Sculptor of Marble - besides several works in Marble - moddels in Clay. had Modelld from the Life several Busts or portraits extreamly like Mr. Pope. more like than any other Sculptor has done I think ...'. [2] In 1742, describing Pope at Lord Oxford's sale, the young Joshua Reynolds noted: 'Roubiliac the statuary, who made a bust of him from life observed that his countenance was that of a person who had been much afflicted with headache, and that he should have known the fact from the contracted appearance of his skin above the eyebrows, though he had not been apprised of it.’ [3]
Roubiliac had completed a bust by 1738. Four marble versions are dated as follows: 1738, now at Temple Newsam House, Leeds, probably sold from Kenwood, 1922; 1740, at Milton, the Earl of Fitzwilliam, and the only one of the four not incised ad vivum; 1741, Shipley Art Gallery, Gateshead, at one time in the Lambton collection, from the posthumous sale of Mrs Garrick and presumably owned by Garrick himself; again 1741, Dalmeny, collection Lord Rosebery, the bust reported, 1791, in the possession of James Bindley (1737-1818), a collector of note at the Stamp Office, later owned by George Watson Taylor, previous owner of NPG 112, and by Sir Robert Peel. A full head-and-shoulders terracotta corresponding with the Rosebery bust and presumably preceding the marbles, was lot c76 on the third day of the Roubiliac sale, 14 May 1762 and probably then passed to the surgeon and collector John Belchier (1706-85). Later owners were Samuel Rogers, John Murray III and Mrs Copner from whom it was acquired, Sotheby's, 19 June 1970, lot 47, by the Barber Institute of Fine Arts. A plaster of the same type in the British Museum was among those bought by Dr Maty at the sculptor's sale. A number of other versions include a small bronze in the collection of F. J. B. Watson, and the marble in the Victoria and Albert Museum. [4]

Tip of nose broken and replaced; a few paint losses.

Bought, 1930, from the Musées Royaux des Beaux-Arts de Belgique, Brussels; stated to have been in a garden at Antwerp, and brought from England many years before.