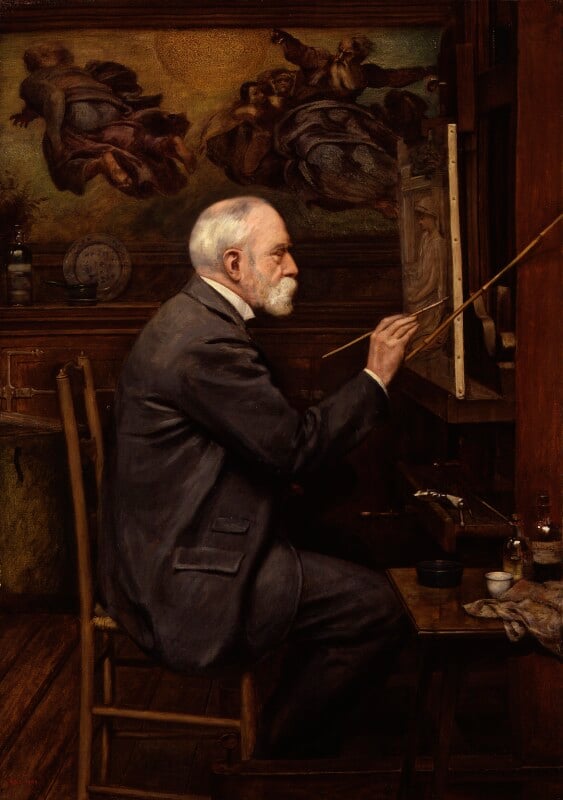 The sitter is shown painting a small canvas of a seated female figure. At the date of this portrait he was in his seventy-third year, with a long career in painting and art administration behind him.

The artist Philip Burne-Jones and the sitter were closely connected through the sitter’s wife, Agnes Macdonald Poynter, who was the artist’s maternal aunt. The portrait, exhibited at the Royal Academy in 1910, forms one of a series of ‘Great Men at Work’ produced by the artist in the early 1900s, which began with those of his father Edward Burne-Jones (NPG 1864) and his cousin Rudyard Kipling (NPG 1863). Here, however, Poynter’s age and the relatively small size of the picture combine to present him as a declining figure, without any allusion to the ambitious productions of his earlier career.

The portrait appears to have remained with or returned to the artist, who in 1922 offered it to the National Portrait Gallery, observing, ‘It’s rather a nice picture, though I suppose I’m not the man to say that. Anyway, would you allow me to send it along “on approval” as the shop people say? I can’t afford to present it to the gallery, or I would.’ [1] The Trustees agreed to purchase the work in a swift transaction completed on 30 June. [2] A year later the artist responded to a query regarding the background details:

I do not think any further description of my portrait is necessary than ‘Sir Edward Poynter at work’. The portrait was actually painted in my own studio here [41 Egerton Terrace, London SW3] – & the picture on the Easel I indicated from a work of Sir Edward’s long ago finished – I think I did it from a reproduction of some sort. It is of no importance. I have forgotten the name of the picture. – It was something like ‘Horae Serenae’ or something of that kind – but I don’t think that matters. [3]

In fact, Horae Serenae (RA 1894; now Bristol CMAG) is a Leighton-like frieze of classical maidens dancing, and the canvas here depicted is On the Terrace (RA 1889; now NM Liverpool), a young woman in classical drapery in a composition reminiscent of Alma-Tadema. First reproduced in 1889, [4] On the Terrace was also issued as a large-scale colour print, which was evidently the reproduction that Burne-Jones used for the present work. The image on the wall behind the sitter is of God creating the Sun and Stars from Michelangelo’s Sistine Chapel, which may be an allusion to art’s dependence on light; it is not known if this was a conceit, or a glimpse into the studio of either sitter or artist.

Some pentimenti are visible at the lower left side of the sitter, indicating that the back of his jacket has been extended over previously painted parts of the chairback and seat.

According to The Times’s critic, ‘Sir Philip Burne-Jones has succeeded admirably with his portrait of his uncle Sir Edward Poynter, painting at his easel. Since the “Lord Rayleigh” of some years ago, this is quite the artist’s best work.’ [5]

According to the Graphic a year later, the format chosen for the whole series of ‘Great Men at Work’ was:

portraiture on a small scale, but conceived in a large way – each man engaged in his own home at the occupation with which his life is identified. There is therefore, an intimacy and interest about these portraits, which are absent from a mere likeness of a sitter. The picture becomes a ‘document’ … a record in which the interest centres even more in the revelation of the man at work than in the actual likeness or in the artistic quality of the painting.

In the case of the present work, however, the profile pose selected, the sitter’s advanced age and the fact that the setting is not his studio, all reduce the presentation of personality, and challenge the critic’s general claim that the artist’s ‘representation of a man chez lui brings us a better understanding of him’. [6] Or, this flat, uncommunicative image may be an acute rendering of the temperamentally reserved Poynter, whose assiduity in arts administration eclipsed his reputation as a painter.

Images of the sitter in his own studio at The Avenue, Fulham Road, include photographs by Joseph Parkin Mayall (NPG Ax27833) and Ralph Winwood Robinson (NPG x7386). A more expressive portrait is the etching by Alphonse Legros (NPG D5553).

Whole-length, profile to right, white hair and beard, wearing loose dark-grey suit, seated on rush-chair at easel painting with brush and mahlstick, in background long horizontal cupboard beneath painted depiction of a section of the Sistine Chapel ceiling.