1 of 7 portraits of Valentine Cameron Prinsep 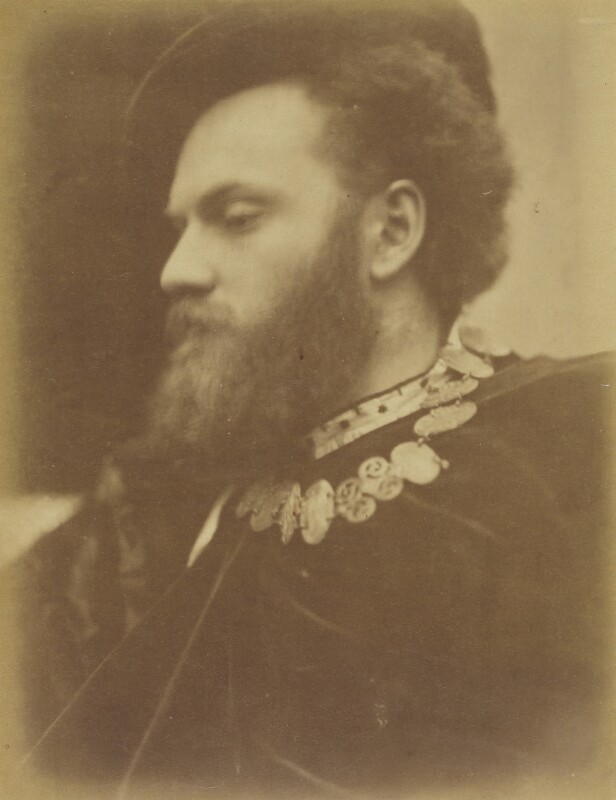 This image was created in 1863 for David Wilkie Wynfield’s series of artists portrayed in historical and contemporary costume, many of which were released for sale from March 1864 under the title The Studio: A Collection of Photographic Portraits of Living Artists, taken in the style of the Old Masters, by an Amateur.

In this bust-length portrait, Prinsep wears a dark cap and cape, together with a chain of linked and pierced metal discs. The composition is generally modelled on male portraiture by Titian and Tintoretto, some of whose sitters wear linked gold chains. [1] Prinsep’s chain is also seen in other Wynfield photographs, including those of Henry Wyndham Phillips (NPG P81) and F.P. Cockerell (RA, London, 03/6947); it loosely resembles that in Daniel Mytens’ portrait of James I (NPG 109) and presumably came from an artist’s property box. G.D. Leslie describes an evening’s ‘entertainment’ at the home of George Adolphus Storey in which members of the St John’s Wood Clique dressed in fancy costume, noting that ‘Prinsep came … dressed in ordinary evening clothes. This did not suit Val and from our costume-boxes he very soon arrayed himself in various odds and ends, in which he looked the quaintest and most picturesque of the whole gathering.’ [2]

Wynfield took at least three variant poses of Prinsep (see ‘All known portraits, Photographs’), probably all at the same time in late 1863. In two Prinsep wears a dark cap and cape as shown in the present image; the second of these (RPS, Bath, 14598) shows him full-face, and with the cape apparently covering nearly all the chain. [3] The third image depicts Prinsep bareheaded and in profile to the right, clad in a v-necked brocade tunic, with the stem and leaves of a tall plant growing over his right shoulder (RA, London, 03/5670). The most likely location of the photographic session is Wynfield’s studio at 3 Bristol Gardens, Maida Hill, but as it is also recorded that George Frederic Watts invited Wynfield to photograph some of his sitters at Little Holland House, [4] which was Prinsep’s family home, it is possible that his photograph was taken there.

Watts also commended Wynfield’s depiction of Prinsep in a letter to Julia Margaret Cameron, when he wrote: ‘The jewel of perfection I speak of is best found because it exists in connection with extraordinary artistic qualities in some 3 or 4 of Winfield’s [sic]: Val, Fred Walker & Oldham Barlow and one or two others.’ [5] According to George du Maurier, Wynfield’s costume photographs were ‘splendid … You should see Lewis, Leighton, Calderon., Prinsep, Walker! Quels grands seigneurs!’ [6]

One of the images was registered for copyright by Wynfield on 8 December 1863 as ‘V. Prinsep in Venetian Mediaeval costume, bust, nearly profile’. [7] Just possibly that was another variant, as none of the three images listed above shows the sitter ‘nearly profile’, but it seems likely that either the present work or that with the v-necked tunic was the image registered. In either case the costume is too indeterminate to be sure; however, a possible allusion to Titian’s portrait of Pietro Aretino (Pitti, Florence) with sumptuous cape and linked chain may be found in the present work. If so, it is probably the image registered for copyright in 1863.

Despite the costume, no portrait of Prinsep was included in the group called ‘After the Venetian School’, issued as part four of The Studio, which contained images of H.W. Phillips, Frederick Richard Pickersgill, Frederick Walker and William Holman Hunt.

The links between artist and sitter are numerous. Both were members of the St John’s Wood Clique, and both served in the 38th Middlesex (Artists’) Rifle Volunteer Corps (1860–85). In addition, shortly before this photograph was created, Wynfield had been a photographic advisor to Prinsep’s aunt Julia Margaret Cameron at the outset of her career. An album compiled by Cameron before she took up photography contains an unattributed photograph of Prinsep ‘in fancy dress’ or historical costume. [8] In 1874, when last photographed by Cameron, he is dressed as Henry VIII, [9] one of the prints being inscribed ‘Our Royal Cousin’. (Prinsep was first cousin to Cameron’s children.)

The present print was purchased with P70–P88 from the collection of Sir Edmund Gosse. See NPG P95 for a duplicate print. Additional prints are in the Royal Academy of Arts, London (03/5839), Birmingham Museum and Art Gallery (1978P430) and the Royal Photographic Society, Bath (14597).