1 of 2 portraits of Augustus Pugin 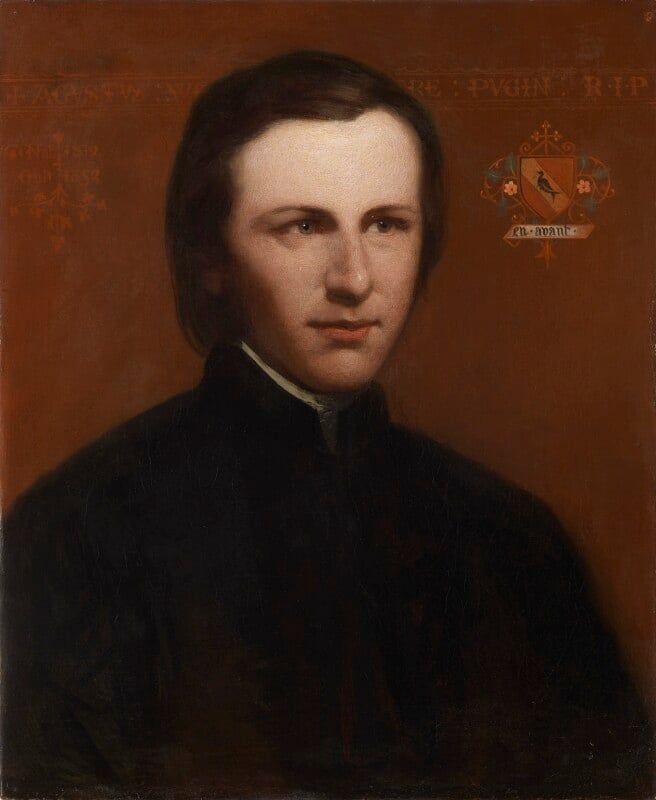 Inscribed along the top: AUGUSTUS: WE[LBY NORTHMO]RE: PUGIN: R.I.P. and below this, on the left-hand side: Nat 1812/Obit 1852
Painted on the right-hand side is Pugin's crest, with the motto, 'en avant'.

This picture was first offered to the NPG by Brown in 1881 but declined. According to Clement Pitman (memorandum of an interview, 1 March 1937, NPG archives), the lettering and coat of arms on the portrait were painted by his father, soon after he bought the painting, though from what source and at what date are not known. This evidence supports Dell's conjecture that the portrait was not posthumous (he thought the likeness too striking), though the inscription might suggest it. According to Dell, the portrait was unknown to Pugin's widow, whom Pugin had married in 1849. The date is based on the apparent age of the sitter. When it first entered the collection, the picture was attributed to G. Richmond, but it is quite unlike his work in style, and it is not recorded in his 'Sitters Book'. George Mackay in a letter of 25 February 1907 (NPG archives), suggested that it might have been the work of his father, Father Edward Mackay, a pupil of H. P. Briggs, and an intimate friend of Pugin. Mackay became professor of painting at Oscott College, and painted many prominent Catholics.