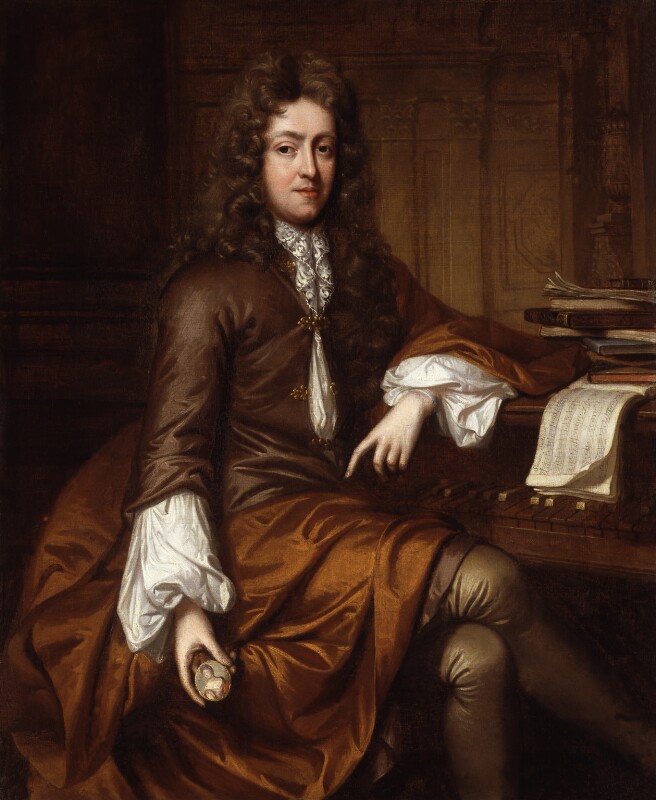 The traditional attribution to Closterman has not found acceptance (it is possibly the work of a Dutch painter) and the sitter's identity remains unproven. A version in the Worcester Cathedral Library appears identical apart from the music (which is identifiable as Henry Purcell's song 'Britons strike home' from Bonduca).
Two other portraits are known of the same sitter, each known as Henry Purcell:
a) with the Royal Society of Musicians, an unattributed half-length, holding up a scroll of music in his right hand; [1] perhaps a little later than NPG 1463; the provenance said to go back to Purcell's grandson, Edward.
b) Christ Church library, Oxford, a bust-length drawing, of copy quality, clearly showing the same head. [2]
Holmes in 1915 was the first to reject the identification of Henry Purcell, the long and slight face being clearly at variance with established portraits. He tentatively proposed Purcell's cousin Daniel (c.1670-1717); [3] Holmes's proposal was founded primarily on the alleged pedigree of a) above; if the sitter was a musician from the Purcell family and active c.1700 (i.e. immediately after Henry's death), Daniel was the only possibility. But in absence of a documented portrait of Daniel the identity must remain open to question.

1 Presumably from his father, Dr Charles Burney (1726-1814), cf. Purcell NPG 4994.
2 Any identification is impossible to confirm or deny. His wife Elizabeth (whom he married 1705 and who predeceased him) has been suggested, but no portrait of her is known.

1 Second Special Exhibition of National Portraits ( ... William and Mary to MDCCC), South Kensington, 1867, no.38 as Henry Purcell by Closterman, lent by the Rev. Charles Burney; Gawthorpe 1987-.

1 The remains of a label, verso, suggest NPG 1463 appeared in a 'Musical' exhibition; Charles Burney (the donor, letter of 14 April 1907 on file) wrote 'apparently [the portrait] was also exhibited much later at some more recent exhibition for it bears a paper label in the hand writing of one of my sisters "Lent by Archdeacon Burney" but the date is not given'; this may have referred to the Music Loan Exhibition of 1904 (Fishmongers' Hall) but according to the commemorative catalogue, 1909, p 232, Archdeacon Burney was not a lender (a Mrs Sinclair and the Misses Done lent a portrait of Purcell attributed to Kneller).