6 of 14 portraits of Edward Bouverie Pusey 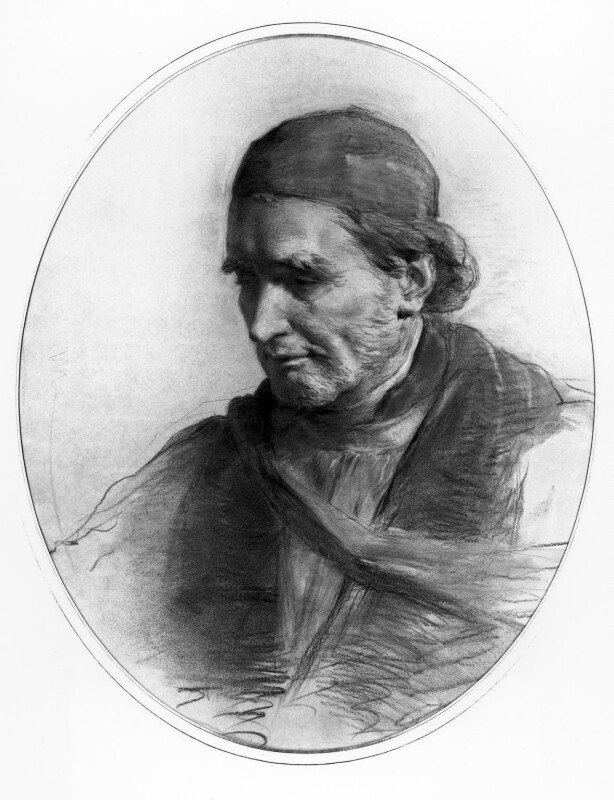 Inscribed by the artist, on a piece of headed notepaper (20, York Street,/Portman Square. W.), attached to the back-board: George Richmond R.A/Study for the Picture of Dr. Pusey now at Christ Church/Oxford/(Posthumous)/Loan by G. Richmond

This is a study for the picture of Pusey by Richmond of 1890 at Christ Church, listed by Mrs R. Lane Poole, Catalogue of Oxford Portraits, III (1925), 101-2, and in the artist's 'Account Book' (photostat copy, NPG archives), p 104. Richmond also executed a marble bust of Pusey in 1883 (based on a death-mask taken by Dr Acland, and various prints and sketches), now at Pusey House, Oxford, exhibited RA, 1884 (1787), listed in the 'Account Book', pp 98-9; a study for this bust is also at Pusey House, and a plaster cast is at Keble College, Oxford, listed by Mrs Poole, III, 285. The marble is shown in a photograph of Richmond in his studio of 1883 (example in NPG).
Henry Clarke, in a letter of 2 February 1923 (NPG archives), claimed to possess an earlier painting of Pusey by Richmond, which he had bought in Oxford in 1883-4. According to Clarke, a committee was formed during Pusey's lifetime in order to commission a portrait, which they wanted to present to him. Pusey refused to sit, and the project fell through. Richmond, hearing of it, however, came down to Oxford and surreptitiously sketched Pusey in the cathedral, hoping to win the commission. The committee reprimanded Richmond, who disposed of the portrait privately, and it came into Clarke's possession; a similar account was published in the Manchester Guardian, 17 October 1924. The story sounds improbable, for Richmond was an established artist, who had no need to obtain commissions in this underhand way. He would hardly have been asked to paint Pusey in 1890, if he had caused trouble on an earlier occasion.

The artist, purchased from his executors, 1896.