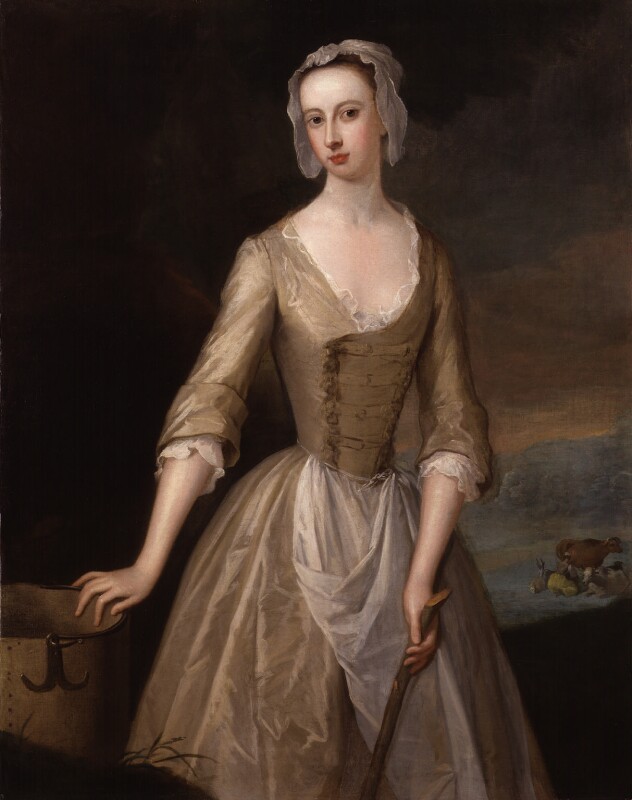 A comparison with such typical portraits as that of the Countess of Suffolk (NPG 3891; Editor's note, 2014: formerly on loan to NPG, now English Heritage, Marble Hill House) supports the attribution to Jervas given by Scharf, 1888. [1] Four similar portraits are recorded; in all these the stick in the sitter's left hand is replaced by a round black hat and the background shows a landscape without cows or milkmaid. The first, formerly ascribed to Kneller but now attributed to Jervas, [2] is at Petworth; the second, at Penicuick, is attributed to Aikman while the third and fourth, both approximately half the size of life, are respectively in the collection of W. H. Robertson-Aikman, Scotland, attributed to Anne Forbes, and in a private collection, unattributed. None of the versions with hat seems to be by the same hand. The best stylistically and probably the first, though not necessarily earlier than NPG 238, is the portrait at Petworth. [3]
The Queensberry title, on the death of the 4th Duke in 1810, passed to the Dukes of Buccleuch but no oil by Jervas is known in their collection.

1) Sir George Scharf, Historical and Descriptive Catalogue of the Pictures, Busts & etc. in the National Portrait Gallery, new and enlarged edition, 1888, p 369.
2) C. H. Collins Baker, Catalogue of the Petworth Collection of Pictures in the Possession of Lord Leconfield, 1920, p 63 (374).
3) This has the same design as the whole length portrait of Mary Warde by A. Devis at Squerryes Court but neither NPG 238 nor any of the related portraits appear to be by this hand.

Dark brown eyes and eyebrows, pink cheeks, pink flush on chest, dark brown hair; white cap, light yellow silk dress with white apron; a stick in her left hand, the right resting on a milk pail; behind her right shoulder a tree trunk and rocks above brown foliage, to the right, a distant view of a milkmaid tending cows.

Face rubbed, the impasto of the skirt flattened, presumably in an old relining; extensive retouching in the background, right; relined, 1895; surface cleaned, revarnished and restored, 1952; discoloured retouchings in the craquelure, especially in the chest, replaced, 1972.