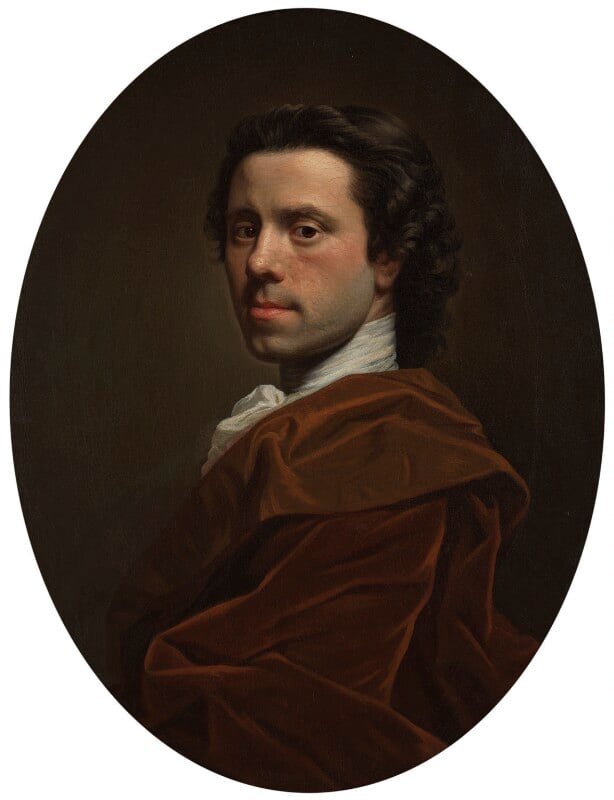 A good version of NPG 3311 with deep red drapery and a pink turnover, lent by Dr T. Loveday to the Ramsay exhibition of 1958 [1], was found, after cleaning, to be lettered A. Ramsay Pictor. 1749. Obviously inscribed rather than signed and dated, the portrait had been in Italy in the early 19th century. The quality is inferior to NPG 3311 and it lacks the pentimenti which suggest that the Gallery portrait is the prototype. The date 1749 seems late for the apparent age of the sitter. A copy, framed as a pendant to a portrait of his first wife, apparently painted at about the time of their marriage in 1739, is in the collection of W. R. Law. An oil copy in the Scottish NPG (189) was made by Alexander Nasmyth in 1781 but no date for the original is given. A drawing in the National Gallery of Scotland (D 2019), although possibly younger, shows a similar pose; it is perhaps a study for NPG 3311. [2]

Flaking in the hair laid; a pentiment along the edge of the chest and ruffle; surface cleaned and varnished, 1964.

Bought, 1946, from Appleby Brothers and by them in Stirling 'a short time before'; believed to have been sold earlier that year from Dowell's in Edinburgh. [1]