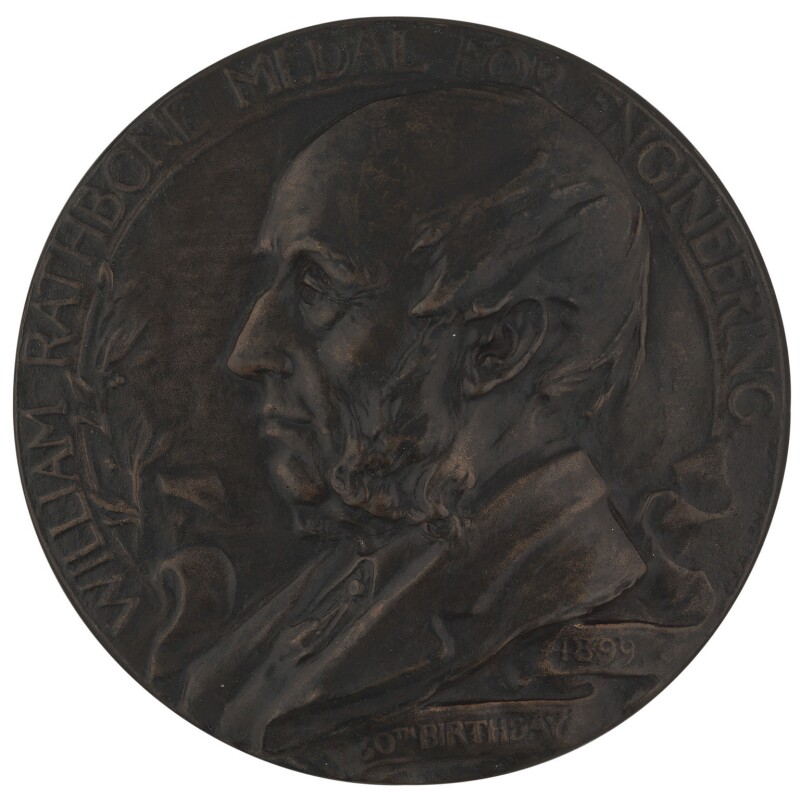 This cast bronze medallion was designed for a prize for engineering at University College Liverpool, the sitter’s endowment of which coincided with his 80th birthday in February 1899. The obverse shows his elderly head in profile with the side-whiskers he retained throughout life, together with scrolls recording the date and some foliage; the reverse depicts two students, shown with a book and a theodolite, together with the college coat of arms and motto, ‘HAEC OTIA STUDIA FOVENT’ (‘These days of peace foster learning’).

The medal, intended for ‘the candidate in any Department of the Faculty who has specially distinguished himself/herself in the final year of the programme for the degree of MEng(Hons) or BEng(Hons)’ and to commemorate the part played by Rathbone in the establishment of the Engineering Department, was first awarded in 1900. [1] In 1978, Rathbone’s grandson added a prize of £50 to the award and in 1990, the Faculty of Engineering agreed to place on record that the William Rathbone Medal and Prize should be regarded as the premier undergraduate award in the faculty.

William Rathbone VI, as he is known in the Rathbone family tree, [2] played a major role in founding and supporting University College Liverpool over some thirty years. After the age of 70, he gradually retired from public duties, finally leaving Parliament in 1895 but remaining president of the University of Wales, Bangor and vice-president of University College Liverpool. [3] In November 1897 the council of University College Liverpool recorded its wish to obtain a portrait study of him for the purpose of a future bust or statue, and planned to arrange a sitting with Charles John Allen, then of the college’s Art Department. ‘With a good deal of pressure’, [4] Rathbone was persuaded to sit, and Allen duly modelled a bust which remained in clay until cast in bronze and presented to the institution in 1901 (see ‘All known portraits, Paintings, drawings, sculptures and prints, 1901’).

This relief portrait, which is presumed to have been done from life at the same time as the bust was created but also bears close resemblance to a late profile photograph (see ‘All known portraits, Photographs, c.1889’), is softly modelled and set against a matt background in a manner that accords with the description of another work by Allen, where similarly ‘branches of bay veil the transition between the three-dimensional image and the two-dimensional border presenting the inscription’;[5] in this case the scrolls to right and left and below the head further erase the division. The reverse design shows two male students in profile view, one seated reading, the other leaning over to look at the book, with a surveyor’s theodolite beside him.

Annually from 1900, a new medal engraved with the recipient’s name and date has been produced. When that awarded in 1938 to Edgar Stanley Williamson was offered at auction the design was described as ‘extremely fine, an impressive New Sculptural medal’. [6]

The plaster design for the work was shown at the 1899 Liverpool Autumn Exhibition at the Walker Art Gallery. Another original bronze cast is in University of Liverpool’s art collection (see ‘All known portraits, Paintings, drawings, sculptures and prints, 1899’). The present cast was retained by the artist and presented to the National Portrait Gallery after his death.

The artist, C.J. Allen, studied at Lambeth School of Art and the Royal Academy Schools (c.1887–91), where he won several prizes; he then acted as studio assistant to Hamo Thornycroft before being appointed in 1894 as sculpture instructor in Liverpool, eventually becoming vice-principal of the city’s School of Art, until retirement in 1927. Allied to the ‘New Sculpture’ movement, in a long exhibiting career at the RA, Liverpool, Leeds, Birmingham and elsewhere he showed subject groups, allegorical figures and portrait busts as well as medals. His heroic Perseus carrying the head of Medusa on his shield (1894) was a critical triumph, although never realised in bronze. Public sculptures included a relief scheme for the Royal Insurance Co. and the figures on Liverpool’s monument to Queen Victoria (1902–6). Commemorative items like the present work include a portrait plaque delineating Francis Gotch, also for University College Liverpool, and memorial busts of Rathbone’s brother Alderman Philip Rathbone (d.1895) and of Rathbone himself (see ‘All known portraits, Paintings, drawings, sculptures and prints, 1902’). Allen’s work is discussed in Walker Art Gallery (1981) and Clough (2003).

In 1957 Allen’s three children, Charles, Alfred and Margaret, noting recent press attention to Rathbone’s role in public health promotion, offered the medal to the NPG, where it was accepted by the Trustees on 5 April. [7]