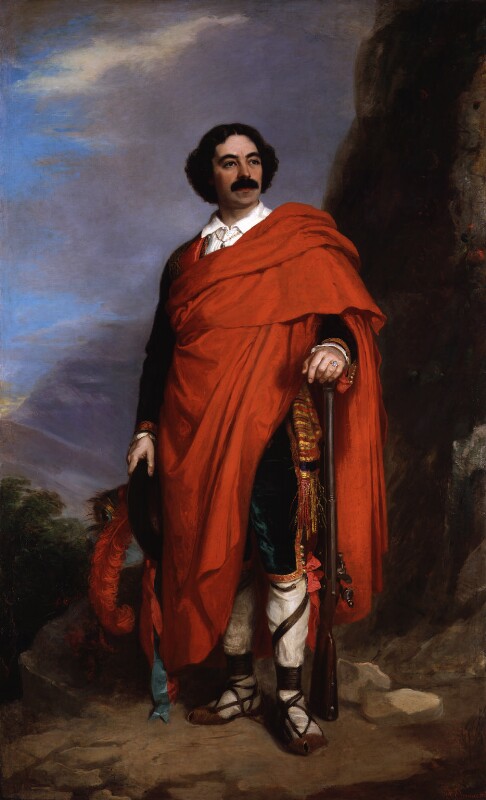 Signed and dated (bottom right): A. Ossani 1863
Inscribed in ink on a printed Roberson label on the back of the stretcher: Sig Ossani/Sims Reeves Esq/99 ... [illegible] Terrace[?]
The canvas was supplied by Charles Roberson of 99 Long Acre, but this is not the address on the label.

This portrait shows Reeves in the title-role of the opera 'Fra Diavolo, ou l'Hôtellerie de Terraciné' by Auber and Scribe (libretto). He first played the part early in 1852 at Drury Lane, with instantaneous success. He revived the opera on several occasions, and always spoke of it as one of his favourite parts. 'It is musical', he once said, 'so full of point, so interesting; it always gives you something to think about' (Pearce, p 167). Reeves was also responsible for changing the finale of the opera. Instead of 'Fra Diavolo' being limply led away by his captors, Reeves substituted an escape for the romantic robber, a leap from a precipice, recapture, and eventual death while seizing a member of his band whom he believed had betrayed him (see Pearce, p 174). This was generally admitted at the time to be a vast improvement. The NPG portrait has suffered from bituminous cracking and various damages, and is at present in an uncleaned and unrestored state.

Dark complexion, greyish-brown eyes, dark brown hair and moustache. Dressed in a white shirt, with a gold chain and locket around his neck, dark green coat and breeches with a red border and red ribbons at the knees, a red cloak, a multi-coloured, fringed sash, a gold ring with a green stone, white stockings, and brown sandals. Holding a dark green hat with a red feather and a peacock feather and green and red ribbons. Leaning on a brown wood and steel flint-lock gun. Standing in a predominantly brown and green landscape. Pale greyish-blue sky.

The sitter, purchased from his daughter-in-law, Mrs Herbert Sims Reeves, 1935.