6 of 872 portraits matching these criteria: 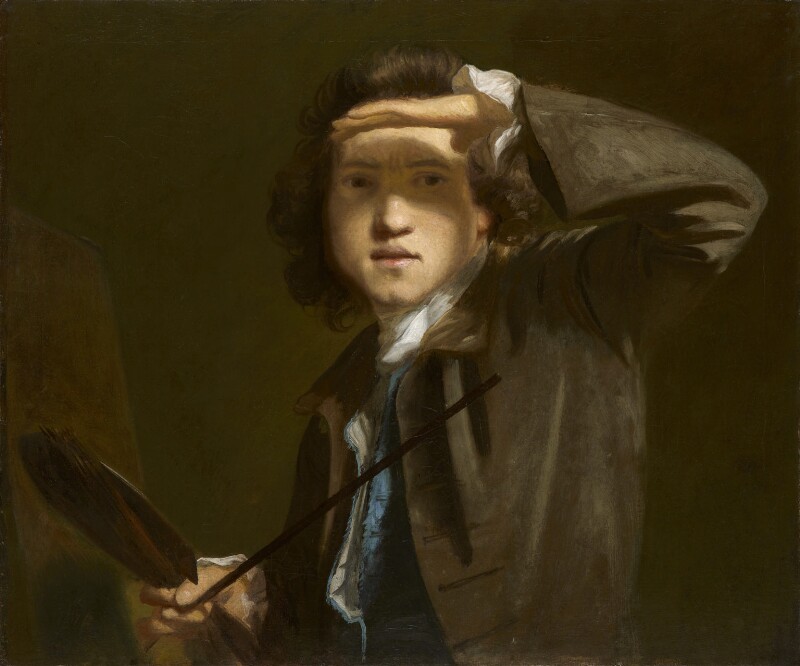 The only (undisputed) one of Reynolds’s many self-portraits to show him engaged in his trade. [1] The engravings show that between 1808 and c.1823 NPG 41 was reduced along the top and bottom edges to its present shape. The proportions of the 1795 mezzotint suggest the original size was 91 x 75 and that 20 cms. were removed from the top edge and 8 cms from the bottom. [2]
NPG 41 may be dated after Reynolds had left Hudson in London and before his departure for Italy in May 1749, as Malone first suggested [3] and Mannings has argued; the brown and blue of his frock coat and silk waistcoat are indicative of the 1740s. [4] The originality of the composition and the technical assurance had previously suggested a later dating; Leslie and Taylor had hinted that the mouth showed signs of the accident Reynolds sustained in 1749. [5]
A nineteenth-century copy of NPG 41 in its present format is at Stourhead.

Brown eyes, dark hair, wearing a grey frock coat with a velvet collar, and a blue silk waistcoat;1 an area at the extreme bottom left, with the easel and the artist’s right hand, is left unfinished.

1 The palette in his right hand resembles one in the Cottonian Collection, Plymouth City Museum & Art Gallery.

1 Corn merchant of Liverpool, s. of Joseph Sandars (1752-1842) of Derby; described as of Johnston House (W. Cotton, Sir Joshua Reynolds and his Works, 1856, p 272) and of Taplow House, Berks (G. F. Waagen, Treasures of Art in Great Britain, IV, p 292; perhaps acquired following the death of the 2nd Marquess of Thomond at Taplow in 1846); instrumental in the building of the Liverpool-Manchester railway.

S. W. Reynolds 1 February 1795 (From an Original Picture in the possession of Thos Lane Esqr of Coffleet); R. Cooper, from a drawing by J. Jackson, 24 June 1813 (reversed, for Northcote's Memoir of Reynolds);1 S. W. Reynolds c.1823 (showing the portrait reduced to its present proportions).