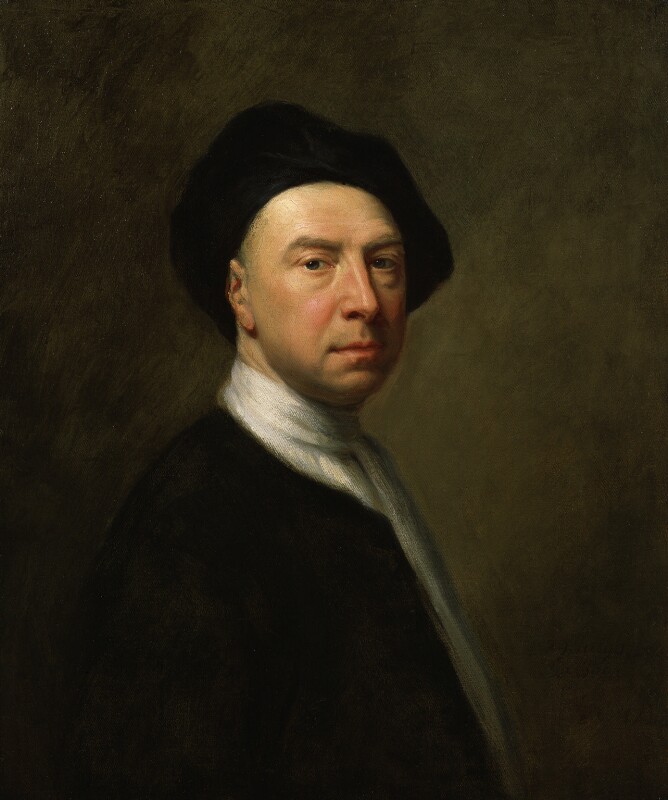 Scharf claimed that NPG 706 was signed and on comparison with the self-portrait with own hair etched in 1738 (F. O'Donoghue and Sir Henry M. Hake, Catalogue of Engraved British Portraits ... in the British Museum, 1908-25, 1) he dated it to that year. [1] The etching, however, relates more convincingly to a small-scale oil, not known to Scharf, in the Lindsay collection, Colstoun. Like the companion portrait of Pope painted in 1742 (see Alexander Pope, All Known Portraits) it is a late type and was still at Dalhousie Castle in 1861. A red chalk head formerly attributed to Arthur Pond, British Museum (ECM 9), [2] is similar in pose to NPG 706 although the sitter looks younger. The black chalk drawing (ECM 2) dated by the artist 13 July 1728 also has affinities with this portrait. The drawings bear the JR stamp [3] of the sitter's collection but neither is likely to be a study for NPG 706.

Bought, 1883, from Graves, previous history unknown; possibly one of the heads noted by Vertue in 1751 'at MR JonathN Richardson son of the painter. several pictures and paintings of the familys pictures - of himself the old man a painter. one excellent one a half length Genteel. Gentleman-like natural action and habit - several other heads of himself ...'. [1] NPG 706 is also consistent with an item in the son's sale, Langford's, 18 February 1772, lot 77: 'Richardson sen. - His own portrait 3 qrs.'. Lot 45 was also a self-portrait. Lot 77 is the only one described as three-quarters (i.e. on a three-quarters canvas, approximately 30 x 25 in.).