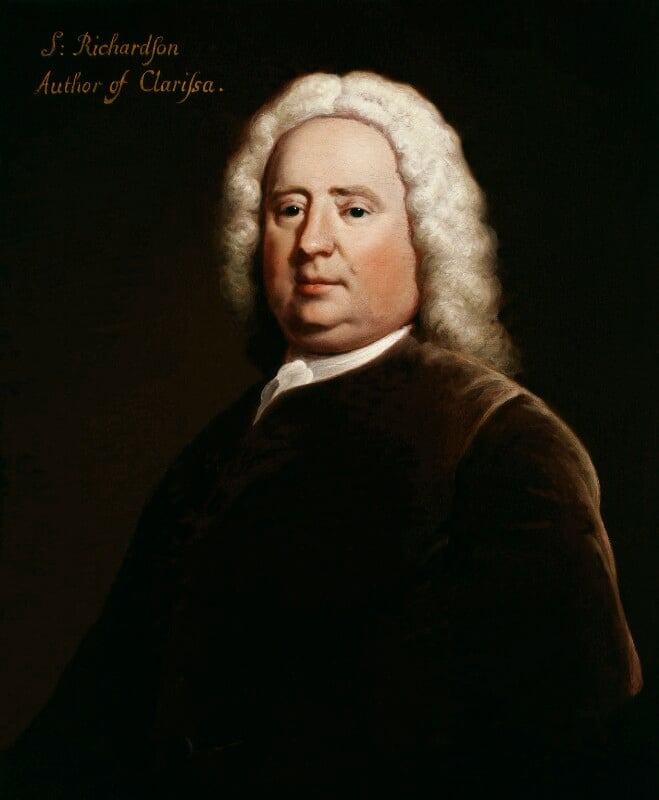 NPG 161 is of fair quality, but probably no more than a repetition. The original must be Highmore's three-quarter length, signed and dated 1747, at Stationers' Hall [1] where a companion portrait of the sitter's second wife, Elizabeth Leake (c.1694-1773) was destroyed by enemy action 1939-45. Early references suggest that these three-quarter lengths were still in the sitter's family at the end of the eighteenth century. Madame de Genlis, before leaving London on 22 July 1785, [2] referred to a portrait of Richardson 'de grandeur naturelle et a l'huile' owned by 'Monsieur Bridget'. [3] Edward Bridgen (d. 1787) husband of Martha, a daughter of Richardson's second marriage, bequeathed to 'Mrs Anne Richardson of Stratford', another of the sitter's daughters, 'the only original picture of her father, the ingenious friend to virtue', desiring that after her death it 'be ... delivered to the Company of Stationers to be fixed up in their hall' [4] The pair are likely to have been those mentioned in Anne Richardson's will [5] she died in 1803 and had wished to keep them in the family. [6] It is unlikely that it was from her estate that they were presented to the Stationers' Company in 1811. [7]
The only extant oils are NPG 161 and the three-quarter length, and probably no other life-size versions were painted. McArdell's mezzotint, shows a paper in the sitter's hand instead of the book, and a garden seat with inkwell and quill on the arm, below the masonry, right. The small engraving by Caroline Watson published for The Correspondence [8] combines the book, as in the original, and the seat from McArdell but without the inkwell. The background is plain. The accompanying letterpress described the engraving as a 'Portrait of Mr. Richardson from a Painting by Highmore, in the possession of the Publisher', [9] i.e. Sir Richard Phillips, owner of the head and shoulders (NPG 161). He is not known ever to have had the three-quarter length version. Both engravings appear therefore to be free copies of the original rather than arguments for the existence of lost portraits.

Bought, 1863, from Colnaghi's; owned at one time by the publisher Sir Richard Phillips, collector of literary portraits (see Chesterfield, NPG 158) who had also purchased letters from Richardson's grandsons Samuel Crowther and Philip Ditcher; [1] NPG 161 may thus have been acquired from the sitter's family. Earlier history not known. [2]