1 of 1131 portraits matching these criteria: 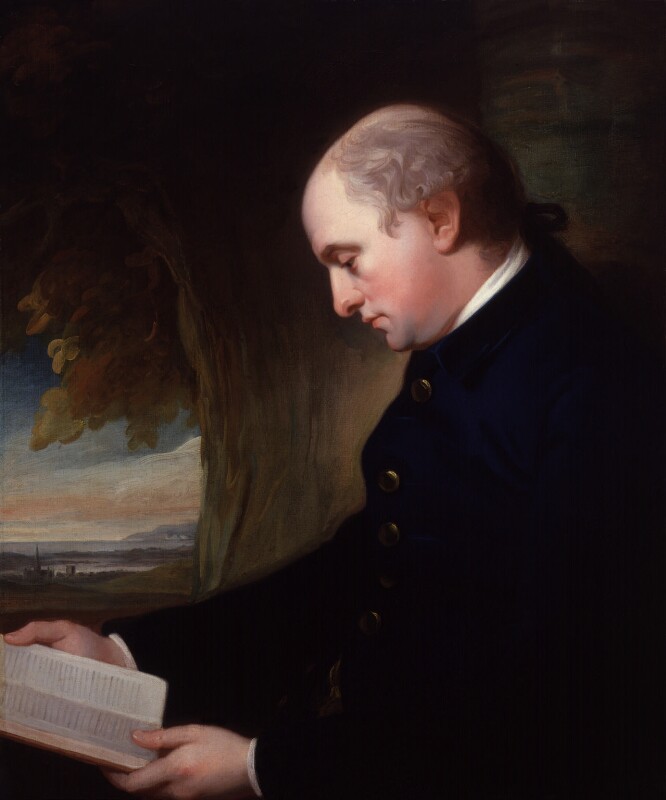 The Duke of Richmond had ‘a great regard’ for Romney. He had first noticed him studying in the sculpture gallery at Richmond House and had subsequently encouraged him to study in Italy. When Romney returned to London in July 1775 he had some difficulty in re-establishing himself:

‘ruin was already beginning to stare him in the face, when, at length, the Duke of Richmond, not forgetful of the encouragement he had formerly given him, came to sit for his portrait. The picture was a three-quarters, and represented his Grace en profile, reading. It was universally admired, and he was in consequence commissioned to paint several copies for the Duke’s particular friends’. [1]
On 25 November 1775 the Duke described his portrait, while urging his friend Edmund Burke to sit to Romney:

'in the midst of Business a little Relaxation is of use, but I have thought of a method even to reconcile Your Business with this sitting, which is by having Mr Romney take Your Portrait while You are writing or Reading whichever you like best. I know the Painters have a nonsensical Jargon that such attitudes throw a Shadow on the face, lose a Part of it, and particularly the eyes which are so necessary to the Countenance. But in truth all this is not founded, and is meant more to flatter the sitter than for any real purpose. Romney has half finished one for me which for my own Conveniency I chose to have reading, and altho' the Brilliancy of my Eyes are lost, I believe you will think it a good and a like Portrait when you see it.' [2]
Hayley described the portrait as ‘a happy specimen of the improving artist’; [3] it is a remarkable contemplative image of a sitter noted for his vehemence. Romney was to use the same half-length reading profile for his portrait of Samuel Whitbread in 1781-83 (Eton College).
Romney’s sitter and account books show that sittings took place on 24 April and 6, 9 November 1776, and 24, 28 January 1777. [4] The original portrait, for which he received 15 gn. on 21 March 1777, was sent to Lady Louisa Lennox (the Duke’s third sister, who married Thomas Conolly) and four copies at 10gn. each were sent to Lady Susan [Sarah] Lennox (the sitter’s youngest sister, who married 1) Sir Thomas Bunbury and 2) George Napier); Mr Adair, Serjeant; [5] Mr Adair, St James’s Street, and Mr Peckham; a fifth was apparently sent to William Ogilvie (who married Emily, the Duke’s second sister) on 9 April 1788. NPG 4877 is evidently one of the replicas, and is distinguished by the inclusion of a distant view of Chichester Cathedral. It is no longer clear which is the prime version; versions are at Goodwood [6] and Cirencester, [7] and there are two in American collections, one dated 1778, [8] the other apparently of prime quality. [9] Further, unverified, versions are recorded. [10] None of these versions exactly agrees with the mezzotint by James Watson published on 21 December 1778, which shows lace cuffs; a second state, published on 21 December 1782, shows the Garter star (awarded in April 1782). [11]
Reduced copies include a miniature by Henry Bone, formerly at Holland House; [12] an enamel at Cirencester; [13] a painting by John Milbourn (private collection, from the Strawberry Hill sale, 17th day, 13 May 1842, lot 37); another with H. H. Heldring, The Hague, in 1962, and a third in the Castle Howard sale, Sotheby’s, 11-13 November 1991, lot 557.

Dark eyes, grey powdered hair with black ribbon, wearing a blue coat; a distant view of Chichester cathedral from the north east (as seen from Goodwood, but not to be taken too seriously).

View all known portraits for Charles Lennox, 3rd Duke of Richmond and Lennox