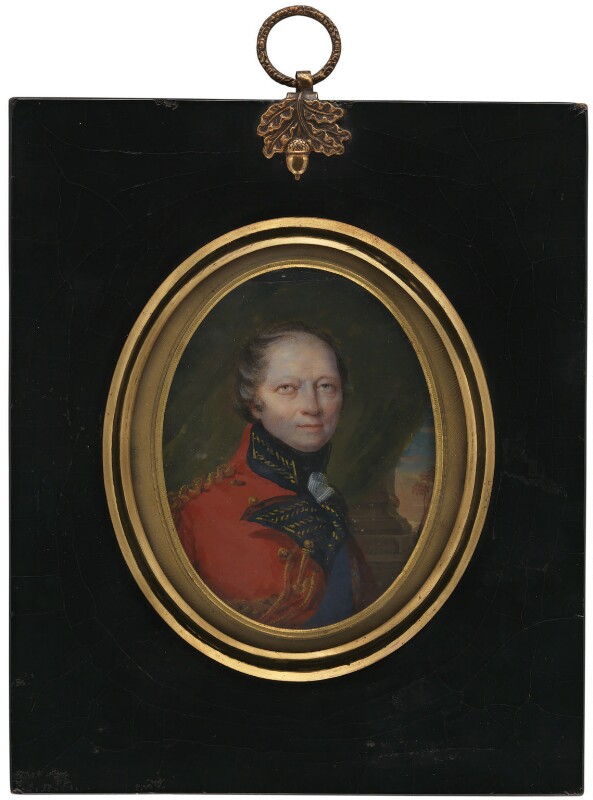 The miniature was acquired with Sotheby's attribution to James Nixon but after examination by Mr J. Murrell in the V&A Museum this was changed to the more likely attribution to one of the Rochards, probably S. J. R. (Murrell's technical report in registered packet). S. J. Rochard painted Wellington in Brussels on 13 June 1815 when Richmond is also known to have sat to him (Daphne Foskett, Dictionary of British Miniature Painters, 1972, p 476). Rochard exhibited RA 1816 a 'portrait of a gentleman' annotated in the Anderdon Catalogue (RA library) as 'Duke of Richmond', but another miniature, attributed to François Rochard (S. J. R.'s younger brother), was lent to SKM 1865 (294) by the Duke of Richmond, possibly that still at Goodwood (315), engraved by C. Knight with artist's name as E. Scott (reproduced Country Life, 3 September 1964, p 583).
Richmond was created Duc D'Aubigny by Louis XVIII on 18 March 1818, possibly on his appointment as Governor-General of Canada, and the inscription on the miniature's backing may have been added then.

View all known portraits for Charles Lennox, 4th Duke of Richmond and Lennox