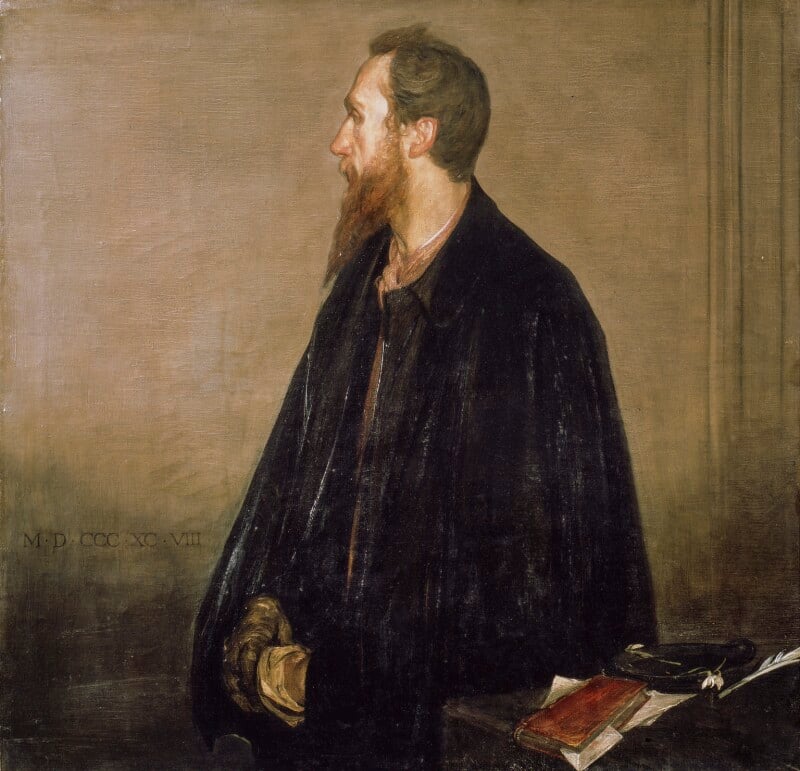 Sitter and artist were lifelong companions from 1882, living first in Chelsea and from 1898 to 1902 in Richmond, where this portrait was probably executed. It has become the premier image of Ricketts and is a companion piece to the half-length self-portrait by Shannon, NPG 3107. It shows Ricketts in an interior setting, with a book, a black dish and three snowdrops as accessories. He wears a long dark cape that effectively disguises his short stature.

The pose comes from the Renaissance, while ‘[t]he squarish format and understated colour recall Whistler’; [1] in addition, the work underlines the view held by artist and sitter that ‘all really fine painting – painters’ painting – has lent towards the dark keys … [in which ] lie infinite possibilities of gradation, mystery and suggestion: infinite resources in the mere quality and consistency of the pigments’. [2] Moreover, both the sombre tones and the profile turned almost out of sight seem designed to convey a Symbolist sense of unknowable interiority, rather than the public display of character claimed by conventional portraiture. This is at odds with what is recorded as Ricketts’s ‘restless, eloquent’ manner and rapid, dazzling conversation, [3] but accords with the view that underneath the ‘great vitality lay a loneliness [and] a deep pessimism … which is the key to his character’. [4]

The dish holding the snowdrops appears to be one of the antique items collected by Ricketts and Shannon. Nearly a dozen such Attic vessels were bequeathed by them to the Fitzwilliam Museum, Cambridge, including two black-glossed Castulo cups similar to that shown here; [5]; a red-figured cup features in Shannon’s 1917 portrait of Ricketts (see ‘All known portraits’) and also in Shannon’s 1907 self-portrait called The Marble Torso.

When exhibited at the New English Art Club, the work was given the title The Man in the Inverness Coat (now normally rendered ‘Inverness Cape’). ‘I like it much,’ commented the sitter. ‘I am turning away from the 20th century to think only of the 15th.’ Later he added, with typical whimsicality, ‘I look as if I had written to Ariosto, the book at my side has been sent to me by Aretino with a hint that a silk doublet would be acceptable. We are in A.D. 1515.’ [6]

The critical response was favourable. ‘Mr C.H. Shannon’s Man in an Inverness Coat might be called the pièce de résistance of the whole exhibition because, as the foundation of a very fine Rembrandt-like exercise in brown, blackish-bronze and olive-greys, it manifests more spirit and originality than is common anywhere,’ commented the Athenaeum, [7] while the Magazine of Art critic wrote: ‘There are here dignity, reticence, simplicity, vigour and character, allied to beautiful drawing and fine quality of paint. The picture is, no doubt, too low in tone for posterity to enjoy Mr Shannon’s work as we do; but as it stands the picture is a notable achievement. There is nothing here [at the NEAC] to take place beside it.’ [8]

Labels for James Bourlet & Sons, Fine Art Packers, indicate that NPG 3106 was at one stage stamped with a display or transport number C21920, while NPG 3107 was numbered C21921, suggesting they were packed at the same time, although no early details of simultaneous exhibition have been discovered.

Before NPG 3106 and 3107 were acquired by the National Portrait Gallery in 1942, they were viewed by Ricketts’s executor Thomas Lowinsky, who wrote, ‘I am not sure whether they are not the best portraits that Shannon ever painted – anyway they are by far the best self-portraits – if you can call the one of Ricketts a self portrait [sic]; – since they were so much identified with each other, you nearly can.’ [9] Later that year, they were welcomed as ‘important acquisitions. Here is not the end of the nineteenth century but the beginning of a new phase in English art; not simply two distinguished painters, but a significant moment in time caught and fixed.’ [10]

Sir Edmund Davis; his widow, from whose estate purchased 1942 with funds from NACF together with NPG 3107.