1 of 4 portraits by Emil Fuchs 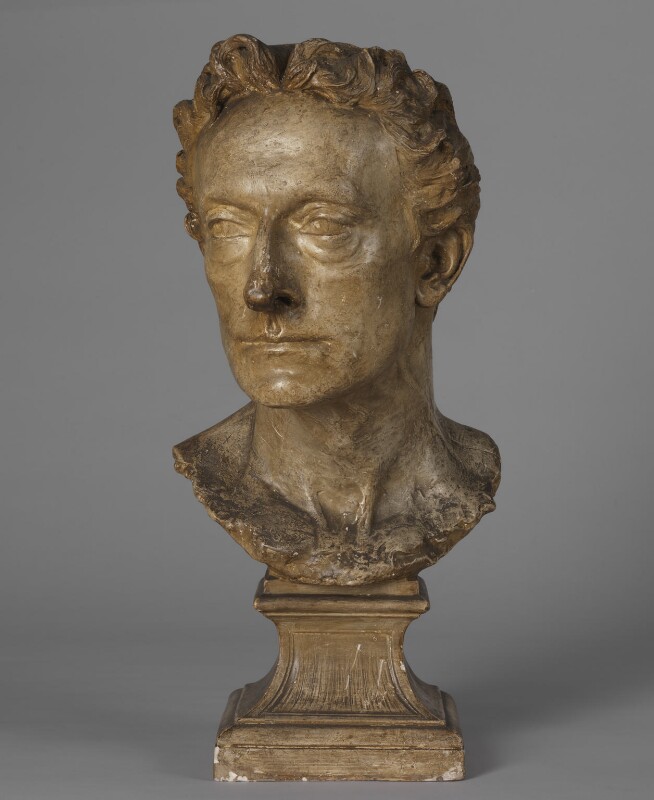 A small-scale bust, cast in plaster and painted to resemble stone. Three finished bronze versions are in the Brooklyn Museum of Art. [1] The sitter’s head turns slightly towards the left, while his eyes are raised to his right, endowing the bust with some alertness of posture, which is complemented by curly, centre-parted hair.

Sittings took place in autumn 1897, during Forbes-Robertson’s highly successful production of Hamlet at the Lyceum Theatre, which ran from September to January, with himself in the title role. He recalled that nightly performances in the demanding role were extremely tiring. [2]

The artist, Emil Fuchs, a sculptor, medallist and painter, was born in Vienna and studied there and in Berlin, where he won the Rome Prize. After six years in Italy he moved to London in 1897, where he executed commissions from patrons including Queen Victoria and King Edward VII, whose coronation medal and postage stamps he designed. He began working in oils in the same year, under the guidance of John Singer Sargent (see his whole-length portrait of Sir Joseph Duveen (1903); Tate, N05999). In 1902 he held his first solo show at the Grafton Galleries and in 1915 he moved to New York.

In his autobiography Fuchs recalled sculpting Forbes-Robertson during his early days in Britain:

During these same early months in London I also came to know Forbes Robertson, Sir Johnston, as he is now. He was then just coming into his own upon the stage. First, as is well known, he had begun, as a painter, with some success as a pupil at the Royal Academy as well as an exhibitor. Presently, however, he discovered that his histrionic talent was greater than his talent for painting. He was making a great success in Hamlet and was considered a worthy successor to Sir Henry Irving. His fine and exquisitely cut features, with the square broad forehead crowned by curly hair, like those of some splendid Roman from classical times, were a great lure to artists. They were eager to have him sit for them, and I was no exception. I was so fortunate as to gain his consent, and before my departure from London I had just time enough to finish the model in clay so that I could take it with me to Rome and cast it in bronze. [3]

Fuchs left London in the ‘late autumn’ and remained in Rome for ‘three or four months’, casting various works. His account implies that the bust was modelled in clay during the latter part of 1897; when illustrated in Fuchs’s memoir, [4] the bronze version is dated to 1898, the year of casting. Normally a plaster cast taken from the clay model would be used to create a mould for the wax version from which the bronze was cast; or a plaster might be taken from the finished bronze in order to create replicas; in this case the creation of the present work is not precisely dated. Possibly two plaster casts were made, one going to Rome, one being retained in London. The present work was cast in plaster in two halves, according to standard practice, with the seams running behind the ears. The head is mounted on a plinth, which is hollowed from the base. It was presumably presented to the sitter, whose widow gave it to the National Portrait Gallery in 1948. It is currently rather dirty, scratched and in need of conservation.

One plaster cast was among the works chosen by Forbes-Robertson for photographic reproduction and mounting in a portfolio of images prepared to mark his final season as actor-manager. Other images are located in the Forbes-Robertson Archive, Mander & Mitchenson Collection, University of Bristol. [5] In the photograph of the cast, however, there is no plinth, which suggests either that it was added later or that the photograph depicts another cast.

In addition to the Brooklyn bronzes, information from the Society of Theatrical Research states that an additional cast was formerly with the Royal Academy of Dramatic Art. [6]

Given by sitter’s widow, Gertrude Forbes-Robertson, 1948.

Illustration to J.T. Green, ‘A Prince of His Calling’, Sunday Times supplement, Jan. 1913 (presumably from publicity portfolio); reprinted in unidentified periodical, page in Mander & Mitchenson Coll., U. of Bristol (uncatalogued 2016).