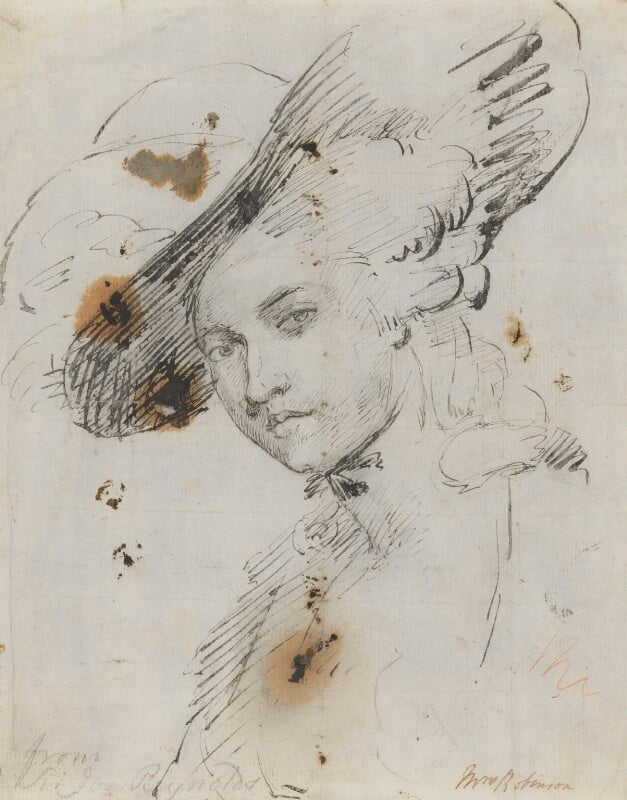 The drawing appears to be a study for, or copy from, Reynolds's famous portrait of 'Perdita' at Waddesdon Manor (E. K. Waterhouse, The James A. De Rothschild Collection at Waddesdon Manor: Paintings, 1967, pp 78-9 and reproduced). It is squared off as for enlargement to a 30 x 25 in canvas and judging from the inscription may have been a present from Reynolds to Mrs Robinson herself though this was by no means his usual habit which was never to part with drawings at all. A large collection of them, bequeathed to his niece, is in the RA library (Luke Herrman in Burlington Magazine, CX, 1968, pp 60-8). Sittings were in January-April 1782, the oil was shown at the RA in May, and further sittings took place in August after the exhibition was over. It was believed at the time to represent the sitter in the guise of Rubens's portrait of Hélène Fourment, then at Houghton and now in the Gulbenkian Foundation, Lisbon, though it also resembles the portrait of Susanna Fourment, seen by Reynolds in Antwerp in 1781 when he seems to have coined its misleading title of 'chapeau de paille' himself (Gregory Martin, The Flemish School (National Gallery Catalogue 1970) pp 174-82). The NPG drawing, which shows 'Perdita' in a large hat with ostrich plume, does not extend as far to the waist as in the Waddesdon oil where the hands are crossed in a similar pose to Rubens; the head too is held at a sharper angle in the drawing than in the oil.

Head and shoulders to left in broad-brimmed hat with plume.