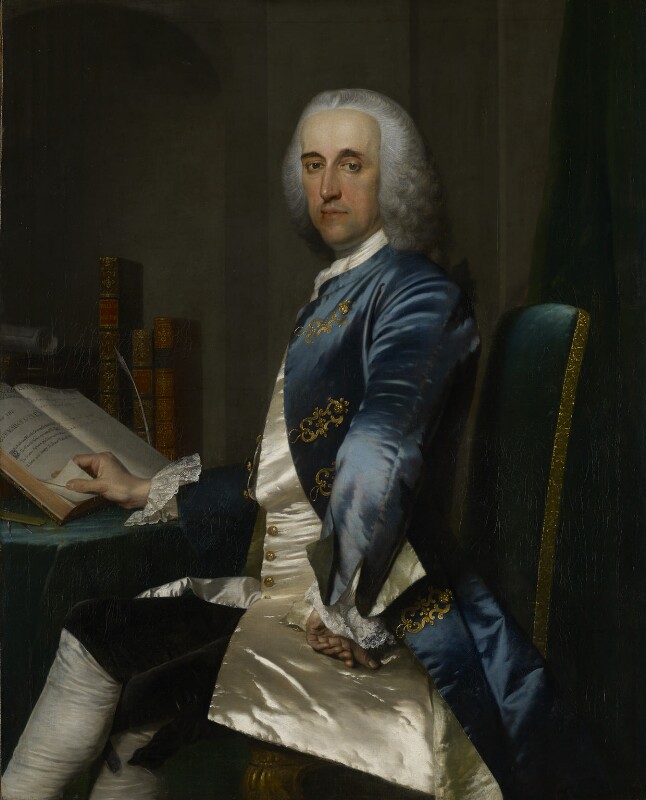 In 1750 Robinson was awarded an annual government pension of £500. NPG 5275 may express his satisfaction, as well as his pretence and learning; richly dressed and elegantly posed, he reads his dead wife’s verses, [1] while advertising his appreciation of Palladio and Shakespeare.

1) Vol.I of her works (which appear not to have been printed) stands on the table; he presumably reads from vol.II.

Blue eyes, grey powdered wig, wearing a blue satin coat lined with white, white satin waistcoat with gold buttons, black velvet breeches and white silk stockings;1 on the table, which is covered by a green cloth, are dividers and books entitled PALLAD/ARCHI/VOL/I and SHAKES/PEAR and LADY LECHMERES/WORKS/VOL I; he turns the pages of a manuscript in which may be read ON THE/COMPAGNIA OF NAPLES/No boisterous Wind the Growing Spring to blast/The Glowing Sumer rip’ning all for taste/The loaden Autumn yielding up her Store/Winter with hoary frost not Whitn’d Oer2