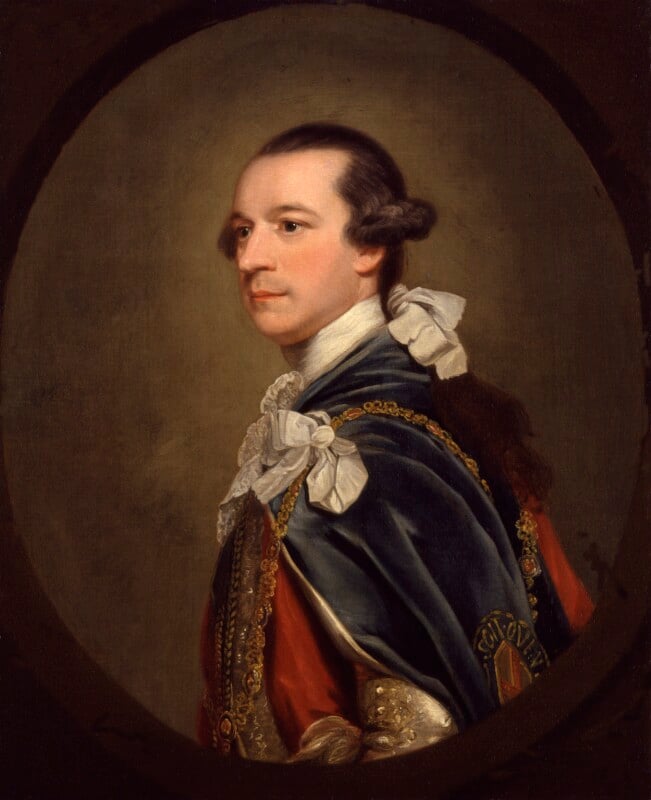 A copy from the whole-length portrait by Reynolds now at St Osyth’s Priory, painted in 1766-68 and first engraved by Edward Fisher in 1774. [1] Full-length replicas are in the Royal Collection painted in 1781-82, [2] and the York Mansion House painted in 1781-83; [3] a three-quarter length studio version, dating from 1781-83, is at Dalmeny. [4]
Many copies are recorded; whole lengths by Katherine Read 1786 (Jockey Club, Newmarket) and Thomas Phillips 1805 (Doncaster Corporation); [5] half lengths include a pastel attributed to Francis Cotes at Rockingham Castle; [6] in miniature by William Birch in the Gilbert collection dated 1786, [7] and attributed to Samuel Shelley, sold Phillips, 6 July 1987, lot 172.

Blue-grey eyes, lightly-powdered toupée wig, his own dark brown hair hanging behind; wearing the Garter robe; within a painted oval and sometime framed as an oval.

‘Direct from the studio of Sir Joshua Reynolds to the late Peregrine Wentworth, for whom it was painted; bequeathed to Francis Maude [c.1768-1842] of Hatfield Hall, near Wakefield’;1 his [invalid] son the Rev Ralph Maude, by whom presented 1875.