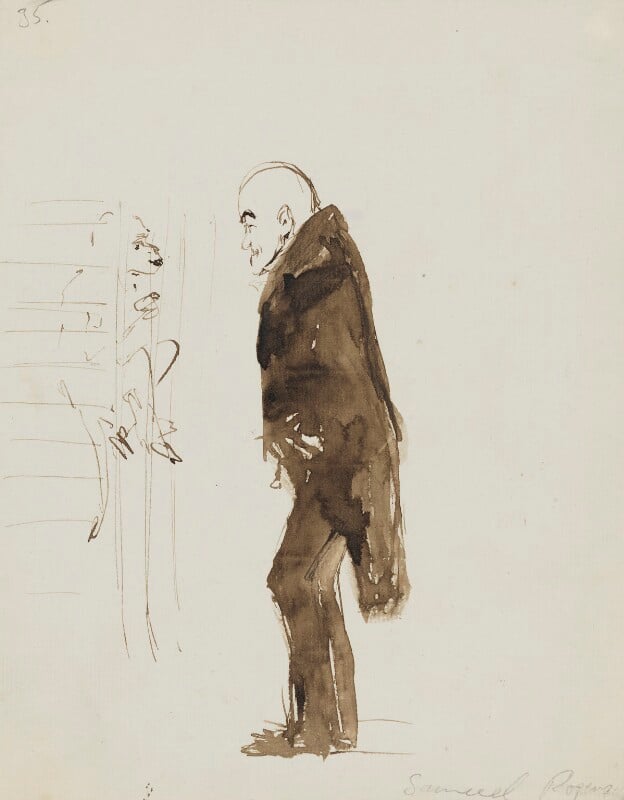 Rogers's poem Italy appeared anonymously in 1822 and a revised version in 1830 illustrated by Stothard, Turner and Landseer. From then Landseer appears never to have lost an opportunity to satirise Rogers's cadaverous features and body. The Scribblers' Book, an album kept at Redleaf by William Wells and now in the British Museum, contains innumerable cartoons and caricatures by Landseer and others, including several of Rogers, a frequent visitor to Redleaf. A sketchbook made at Edward Ellice's hunting-lodge Glenquoich in 1833-41 contained a drawing of Rogers and Mrs Norton at the opera and another of Rogers haranguing Mrs Norton who hides her face with her hands. Two Landseer drawings of Rogers are in Box II at Baron's Court – a whole-length in coat and Mrs Norton reading to Rogers (exhibited RA 1961 no.130). A slight drawing by Landseer is Scottish NPG (48029d). The Chillingham Castle album covered most of Landseer's working life from 1825 onwards though the drawings of Rogers are probably of about 1835.

Rogers with a monkey; the profile exploits the 'shelf-chin' derided by Carlyle in a letter to Meredith 15 November 1838.