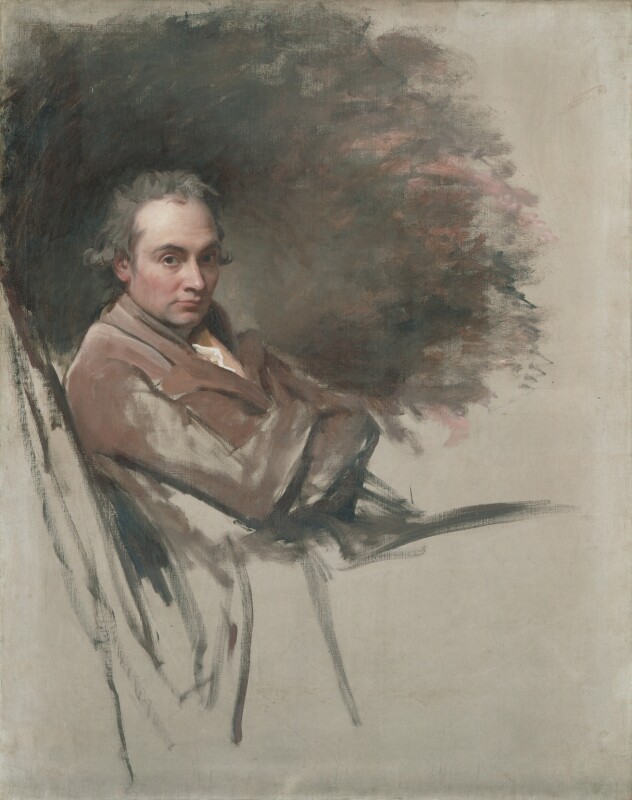 This remarkable portrait was painted for the artist’s friend and subsequent biographer William Hayley. Hayley recalled that it was at his Sussex home, Eartham, in the autumn of 1784 that Romney ‘began at my request the striking resemblance of himself in oil, which may be regarded as the best of his portraits ... the frontispiece to this volume [the engraving by Caroline Watson 1809] with the year of his age, forty-nine [i.e. between December 1783 and November 1784]. It well expresses that pensive vivacity, and profusion of ideas, which a spectator might discover in his countenance, whenever he sat absorbed in studious meditation’. [1] Elsewhere he wrote that it showed Romney ‘as he appeared in the most active season of his existence’. [2] Twenty years later the artist’s son, John Romney, wrote that the portrait was begun in the autumn of 1782 and afterwards given to Hayley ‘who did not allow him to finish it, but hurried it off to Eartham without delay’; the portrait was 'extremely like, and full of character’ and showed his father at the age of forty eight [i.e. between December 1782 and November 1783]. [3] John Romney’s account was repeated by Chamberlain in 1910, [4] but neither Hayley nor John Romney was infallible. [5]
Kidson has suggested that, having been started at Eartham and very probably in the autumn of 1784, the portrait was taken back to London where Romney eventually brushed in the torso to satisfy an impatient Hayley; [6] it was not until 11 August 1787 that ‘The Picture of Mr Romney was sent to Willm Hayley Esq from the Whit[e] Heart Burrow’. [7]

Given by the artist to William Hayley, by whom given c.1820 to the Rev John Romney; by descent to Miss Elizabeth Romney;1 Romney sale Christie’s, 24 May 1894, lot 186, bought Agnew for the NPG.