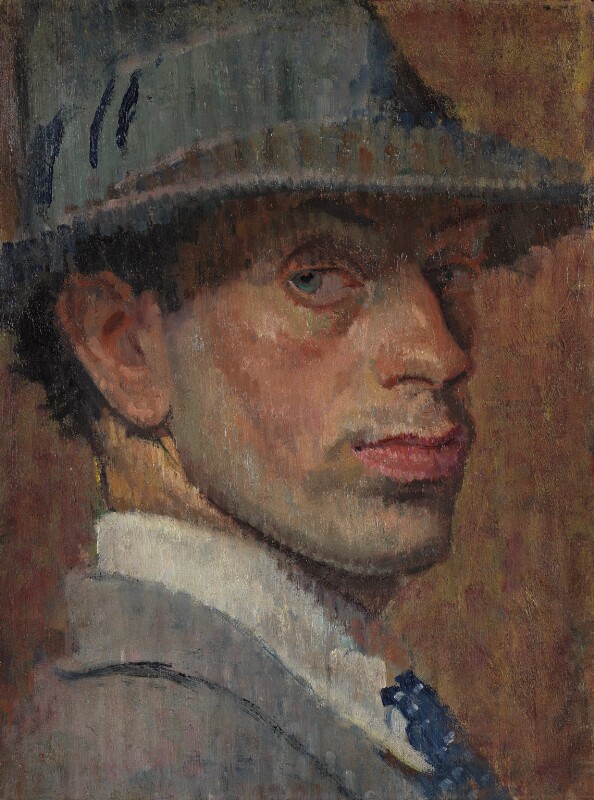 This work, completed in the same year that Isaac Rosenberg enlisted in the army, was much admired by artists and art historians of the time and is one of many self-portraits that this Jewish artist completed before his untimely death on the Front line in 1918. [1] During Rosenberg’s early days as a painter he had very little money to pay for proper studio space or professional sitters and so often had to execute portraits of himself ‘with a mirror propped up on the rickety table’, probably because, as his nephew Isaac Horvitch commented, ‘it was simply that he had no other sitters.’ [2]
Self-Portrait, 1915 shows the head and shoulders of the artist, with his eyes staring directly out to the viewer, and is the final portrait that Rosenberg completed of himself wearing this distinctive ‘violently green broad-brimmed Tyrolean’ hat. [3] Of a kind fashionable among artists at this time, this same ‘trilby’ hat appears in two earlier paintings by the artist, both of which are thought to lack the depth and punch of this third and final work. [4] Joseph Cohen, a biographer of Rosenberg, believes that the artist bought this hat as ‘a grand gesture, full of significance’ in order to symbolise his release in 1911 from an unfulfilling apprenticeship at a firm of engravers on Fleet Street and ‘to celebrate having crossed the frontier into a brave new world’. [5] It was also apparently intended to signal Rosenberg’s ‘emancipation from the ghetto and his entry into the world of art.’ [6]
In her (unpublished) memoir, Rosenberg’s friend Sonia Cohen explained the significance of his choice of clothing, illustrated here and in the earlier trilby portraits, which marked him out as one of the bohemians:

Not only did artists and social revolutionaries separate themselves from philistines (bowler and silk hated respectable) by wearing soft-brimmed sombreros, but their emancipated exclusiveness was further shown in the colour and form of their neckwear. A red tie was the sign of a social revolutionary; that is, a Social Democrat or Anarchist, and a black silk bow showed an artist - a poet or musician as well as a painter of pictures. The bows were tied under low cut ‘rational’ collars, being large and floppy like those worn by Paderewski and Puccini’s artist in La Bohème, Fabians and such like intellectuals went bareheaded with long unoiled hair; and as far as I can remember these young men wore ties in Band of Hope blue. [7]
Cohen also noted that Rosenberg ‘favoured pink ties’, an assessment that is supported by the inclusion of this colour tie in the two earlier self-portraits but not in the third, where the artist wears a much darker shade. [8]
The final painting is a clear reworking of the two images that went before it, featuring a similar pose, clothing and facial expression, but it has also been refined. According to some, in this work Rosenberg finally achieves a sophisticated mixture of the bold pose and assured handling that was somewhat lacking in the earlier portraits. [9] This mixture underpins the composition with his technique of strong vertical brushstrokes, which seems to have originated in his Head of a Woman: Grey and Red from 1912.
In October of 1915 Rosenberg enlisted. He embarked with his unit to France in the following year and remained there until his death whilst on night patrol in April 1918.

Head-and-shoulders, head three-quarters to the right, eyes to viewer.