4 of 9 portraits of William Michael Rossetti 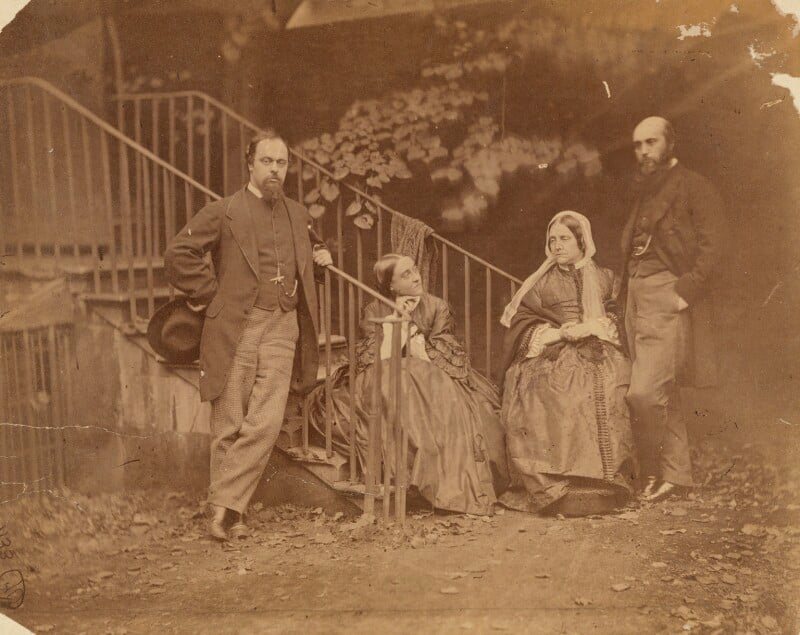 This is one of several photographs taken on 7 October 1863, in the garden of 16 Cheyne Walk, Chelsea, during a four-day session (see NPG P29 for a full account). This shows Rossetti to the left of a family group, beside his sister Christina, his mother Frances and his brother William. Partly owing to its aesthetic quality and partly as the only image that includes both Dante Gabriel and Christina, this photograph is frequently reproduced and constitutes the prime image of the Rossetti family.

As photographer, Dodgson was presumably responsible for the various groupings, although Rossetti also took an active interest in composing photographic images; there is, however, no record of exactly who posed this group, neatly positioning two seated women between two standing men, nor of why Rossetti’s elder sister Maria was omitted. Dodgson’s interest in the family appears to have centred on Dante Gabriel and Christina, a newly-published poet, whereas the siblings were especially eager for photographs of their mother, of whom few likenesses exist.

According to W.M. Rossetti, this photograph shows

the family, omitting our elder sister; they are seated or standing close to the railed stairs that led into the garden from the passage of the house, behind the studio. Dante Rossetti is the front standing figure, at the spectator’s left hand; full-length, nearly full-face; an excellent likeness, in an easy and simple attitude. One here sees Rossetti’s stature and figure better than in any other portrait; the figure now rather fleshy and bulky, but less so than it was from time to time at later dates. This is Rossetti ‘nel mezzo del cammin di nostra vita’, for he was now thirty-five years of age. [1]

When Dodgson’s prints arrived, D.G. Rossetti replied: ‘the three groups are all very good, I think – the best being that with 4 figures only.’ He requested four copies. [2] On behalf of the family, Christina also ordered four prints, together with nine copies of their mother isolated from the group as a vignette (see NPG P1273(26e)).

The negative was numbered ‘70’ and ‘1133’ by Dodgson, the latter being the reference number used in reconstructed registers of his photos.[3] One print measuring 202 x 262mm and with an attached autograph by Christina Rossetti is in the V&A, London, 801-1928; other prints are in the Gernsheim Collection, Harry Ransom Humanities Research Center, University of Texas at Austin (arched top), and the Municipal Archive, Citta del Vasto, Italy (rectangular).

This particular print passed from Rossetti (or more probably from his family) to Frederic Shields, who drew a death-bed portrait (see ‘All known portraits, 1882’), and thence to Ernestine Mills and Helen MacGregor, who gave it to the National Portrait Gallery. It was conserved in 1981 to remove marks on Rossetti’s forehead and to diminish creases at lower left.

Through the Looking Glass: Photography and the Pre-Raphaelite Movement, Manchester City Art Gallery, 1986–7 (21).

Other reproductions of the image
Etching (detail of D.G. Rossetti only) by Charles William Sherborn, 1890 in The Poetical Works of Dante Gabriel Rossetti, 1891, frontispiece; see NPG D16902.