1 of 22 portraits by Dante Gabriel Rossetti 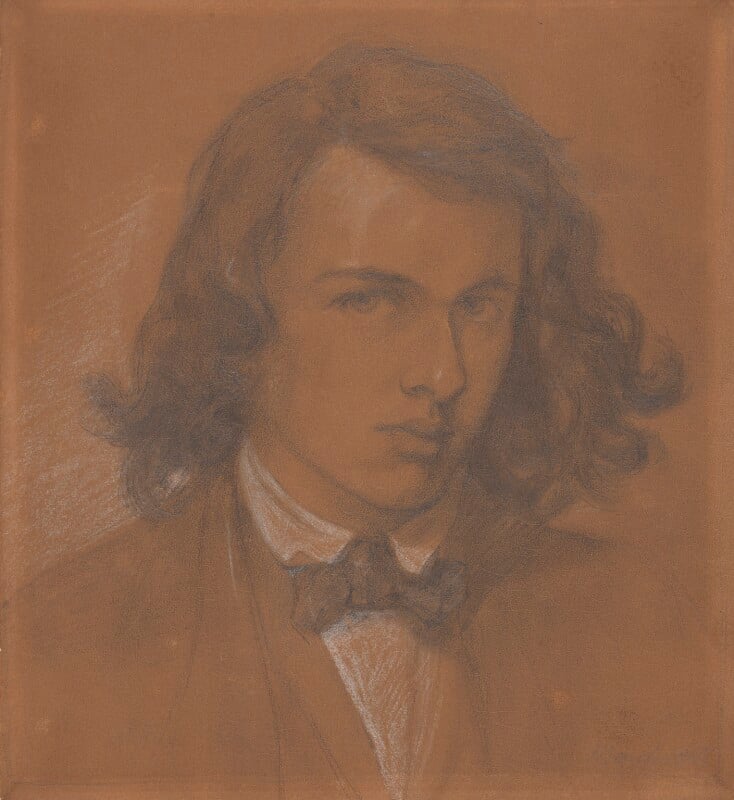 The accomplishment of this very early work by an artist whose imagination often outran his technical skill foreshadows his later, much-admired portrait drawings in Pre-Raphaelite style.

No contemporary reference to its production is known. The inscription ‘March 1847’ is probably in the hand of its first recorded owner, the sitter’s aunt Eliza. [1] At this date, Rossetti was aged 18, living in the family home in central London and in his first year at the Royal Academy Schools, although preferring poetic to pictorial pursuits. His projected subject pictures were on supernatural themes, while his literary compositions included the first version of ‘The Blessed Damozel’, which was among works submitted to Leigh Hunt this year. Favoured reading at this date included Shelley, Edgar Allan Poe and versions of the Faust legend; favoured artists were Theodore von Holst and William Blake. The nature of his current interests may account for the ‘Romantic poet’ quality of this self-presentation.

First shown in the 1883 memorial exhibition, the drawing was first reproduced in engraved form in 1889, with the following text by William Michael Rossetti:

... a delicately drawn pencil head … slightly heightened with white chalk, done by Rossetti, perhaps in 1846, or as likely 1847.[2] It will be seen that he indulged at this time … in an unusual growth of flowing hair; a habit which youthful artists have constantly affected, and which he may be held to have pushed to an extreme. He began this mode towards 1846; it lasted not very long – hardly, I should think, up to the close of 1849. [3] The head is, no doubt, considerably like my brother; still it does not, to me, carry with it that flash of absolute reminiscence of the Rossetti of eighteen or nineteen years of age – the Rossetti of the early Italian translations, capable soon afterwards of the Pre-Raphaelite movement and ‘The Blessed Damozel’ – which I would so gladly receive from it. What damages the likeness is the sidelong set of the eyes, as copied from the reflection in a looking-glass; this gives them a constrained and somewhat furtive aspect, most foreign to my brother’s appearance and character. [4]

From an early date the drawing belonged to Rossetti’s aunt Eliza Polidori, who by 1890 was an invalid cared for by his sister Christina Rossetti. Their brother William was acquainted with Sir George Scharf, director of the National Portrait Gallery, who evidently inquired about the possibility of acquiring a portrait. On 8 December 1890, Christina wrote to William: ‘Thinking of the National Portraits desideratum a scheme occurred to me. I mentioned the affair to Aunt Eliza and find her inclined to sell the long haired portrait of Gabriel. If no bid ensues, I dare say she will give it: but the first overture is commercial. Are you disposed to negotiate the business? Or will you kindly furnish me with an apposite name and address?’ [5] She added that she would be pleased if the work did enter the NPG, because her now partly incapacitated aunt had taken a dislike to it, and proposed gifting it to the family solicitor.

Sir
My brother Wm. M. Rossettti has mentioned to me that the National Portrait Gallery is desirous to acquire a portrait of Dante Gabriel Rossetti our brother. Our Aunt Miss Polidori possesses a drawing of himself done as quite a young man by DGR [sic]. Possibly you may recognise it as one engraved in the Art Magazine in the year (say) 1888: it is the long haired one, amongst those represented. The price Miss Polidori proposes is 20L. Should you care to follow up her offer, pray oblige her by addressing me, as her state of health obliges her to cede business matters to my management. And allow me to remain
Sincerely yours
Christina G. Rossetti. [6]

Scharf replied promptly, with thanks for the offer of ‘a worthy portrait of your distinguished brother the painter. It gratifies me very much to think that your brother William has borne my wish in mind.’ [7] Shortly before the next Trustees’ meeting in March 1891, he arranged for the drawing to be brought for inspection. Christina replied that this would ‘confer a favour on my Aunt Miss Polidori. It is quite a small work and portable.’ [8] On 16 March she reported to her brother William, ‘We have just received from Mr Scharf the good news that “the Trustees of this Gallery unanimously agreed upon the purchase…” This, I think, is a very gratifying evidence of dear G’s standing.’ [9] To Scharf she wrote, ‘Allow me to join my Aunt in grateful thanks to you for so successful an issue: the matter is very pleasing to us.’ [10]

Eliza Polidori, from whom purchased 1891.

Other reproductions of the image
Rossetti 1889a, p.22 (engr. with indecipherable monogram).