5 of 29 portraits of Dante Gabriel Rossetti 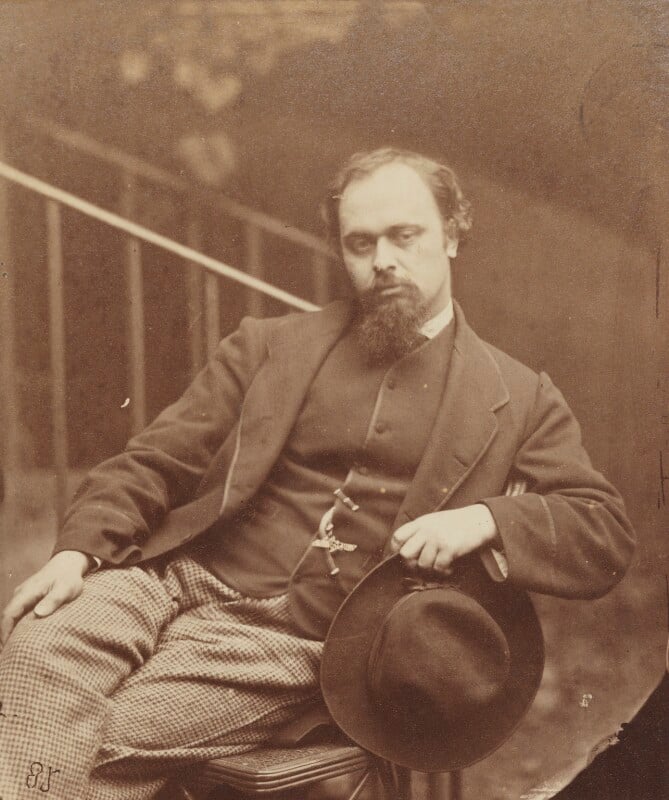 In reverse and upside down lower left, from inscr. on negative: ‘82’.
On card mount, clipped letterhead above: ‘16 Cheyne Walk / Chelsea’;
and signature below, clipped from letter: ‘am yours sincerely / D G Rossetti / [fragment of address] - ist Esq’.

This is one of several photographs taken on 7 October 1863, in the garden of 16 Cheyne Walk, Chelsea, during a four-day session. According to the sitter’s brother William Michael Rossetti:

This is again a seated figure, in a natural and rather lounging pose – the rail of the garden stairs being conspicuous behind. Our sister possesses a print of it; and he who has seen that photograph has seen (as through a glass, not darkly) Rossetti in his prime.… In all the photographs … the expression of my brother is – with some perceptible differences of degree – at once serious, collected and easy, with a marked absence of artificiality, whether in pose or trick of feature. He looks like what he was, a man conscious – habitually but undemonstratively conscious – of power, and superior to all the small devices of self-exhibition. [1]

In 1863, mathematician and keen amateur photographer Charles Lutwidge Dodgson (later renowned as the ‘Alice in Wonderland’ author Lewis Carroll) travelled from Oxford to London in order to make portraits of celebrated literary and artistic figures. He lodged with sculptor Alexander Munro, an old acquaintance of Dante Gabriel Rossetti, noting in his diary that most of his ‘photographic victims’ were available. [2] Some months earlier, Munro had met Dodgson in Oxford and invited him to visit; on a subsequent occasion Dodgson called on Munro to discuss potential sitters, among whom Dodgson included Rossetti and more particularly his sister Christina, whose poem ‘Goblin Market’ was much admired by Dodgson.

The following day, 30 September, Dodgson ‘called with Mr and Mrs Munro at Mr Rossetti’s and saw some very lovely pictures … he was most hospitable in his offers of the use of the house and garden for picture-making, and I arranged to take my camera there on Monday, have Tuesday for friends, and on Wednesday take him and his mother and sister.’ [3] Rossetti reported to his mother:

The photographer (Revd. Mr. Dodgson) is coming here on Wednesday to do the lot of us, – this day week. Will you stay dinner that day & I will ask the Munros – M. & wife – who are the means of bringing Mr D. I suppose Wm [sic] will be back by then will he not? If not, we must put it off. Maggie [Maria] is also available I trust. [4]

The next evening Rossetti dined with Dodgson at the Munros’ and offered to secure Robert Browning as an additional sitter. [5]

Although Dodgson had already met and photographed several mutual acquaintances, including Munro (summer 1859), William Holman Hunt, Benjamin Woodward, Henry Wentworth Acland and Thomas Woolner (all in summer 1860), this was his first meeting with Rossetti.[6] Earlier in the summer, Rossetti had hosted a similar session with the commercial photographer William Downey (see ‘All known portraits, Photographs, 1863’), using the spacious garden behind his new home 16 Cheyne Walk for portraits of himself with John Ruskin, William Bell Scott, Algernon Swinburne and Fanny Cornforth. On the later occasion he was eager to get Dodgson to photograph his family and works of art.

On 6 October Dodgson went to Cheyne Walk. As he was unpacking the camera, Rossetti’s sister Christina arrived. ‘She sat for two pictures, Mr Rossetti for one, and also two friends of his who came in, a Mr. Cayley and a Mr. Le Gros, an artist [see NPG P1273(20a)] I also looked through a huge volume of drawings, some of which I am to photograph – a great treat.’ [7]

Dodgson returned the following morning. ‘Spent the day at Mr Rossetti’s photographing – took groups and some single ones, of himself and his mother, two sisters and brother William, and also of a very fine curly-headed boy (a model) and of Mr and Mrs Munro.’ [8] On 8 October Dodgson photographed some of Rossetti’s works including drawings of his late wife, and on 9 October he took portraits of Madame (Helene) Beyer, a model.

In the first photograph of Rossetti alone on 6 October, he was seated in front of tent-like drapery, wearing a checked waistcoat and trousers and holding his hat. [9] In the present image, as in the group portraits, he wears a dark satin-trimmed coat and waistcoat, suggesting it dates from 7 October.

By the end of 1863, Dodgson had not delivered any prints. Rossetti wrote:

My dear Mr Dodgson, If you take good photographs of people, you know you cannot help them wanting to see them. So I come boring you about the ones you took here. Everyone concerned has reached such a pitch of excitement about them that I am compelled to turn their spokesman or penman. Is there a chance of the photos turning up soon? I hope you were equally fortunate with others after I saw you last. With kind remembrances, I am yours ever truly, D.G.Rossetti. [11]

The prints arrived at Cheyne Walk in March 1864. Some were full-frame, others were vignettes. ‘My dear Sir, Many thanks for the photographs,’ wrote Rossetti. ‘The three groups are all very good, I think – the best being that with 4 figures only [presumably NPG P56] of which I should like much, at your leisure, to have 4 copies for myself. I daresay when my mother sees the photos: which she has not yet done she will be anxious to have some also. Of the one of myself seated [the present work?] which came the first time, 4 copies. Of my sister & mother reading together, 6 copies….’ He expressed a tactful but firm dislike of the solo portrait of Christina, urging Dodgson to arrange another sitting (‘if you can spare the time, as I have no doubt she would’).[12] On 16 March Rossetti returned to Dodgson the list of images ordered.

At around the same date, acting for the rest of the family, Christina also returned an order, requesting vignettes of Maria and her mother, four copies of NPG P56, two of Legros, one of Cayley and two prints of the ‘large oval of Gabriel seated, holding a wideawake, nearly or quite full-face’. [13] Dodgson supplied most if not all those requested. [14]

After Rossetti’s death, the family approached Dodgson again. He replied, ‘My photographic negatives are all locked up at Oxford, and I fear I can do nothing about the matter till I return there about the middle of October, when I will send you word what negatives and prints still exist. I am very sorry you should have to wait so long.’ [15] In mid-October, from Oxford, he despatched five prints, and offered also one [glass] negative, which was duly received. [16] Christina wrote to W.M. Rossetti:

I am going to accept all the prints [Dodgson] kindly offers in gift. The one negative that still exists I cannot recall to mind; so, unless your memory excels mine, his description must suffice. All that now remains to be decided is how many cabinets or cartes (or both) or plain or vignetted (or both) or mounted or unmounted you like to order. Please let me know in due course. [17]

Neither the negative nor the five prints are identified, and it is unclear whether Dodgson offered to supply the ‘cabinets or cartes’ ordered (which would imply he retained five other negatives) or whether the Rossettis were to get his prints reproduced to their specifications.

The present print, marked with Dodgson’s reference number ‘82’ on the negative, is mounted with a printed letterhead for 16 Cheyne Walk above and a clipped autograph signature from a letter below. It was purchased from Christie’s in 1977. Partly owing to the paucity of life likenesses, it became one of the most familiar images of Rossetti for later generations.

Through the Looking Glass: Photography and the Pre-Raphaelite Movement, Manchester City Art Gallery, 1986–7 (20).

Other reproductions of the image
Rossetti 1889a, p.60 (?photogravure, with adjustments).