18 of 29 portraits of Dante Gabriel Rossetti 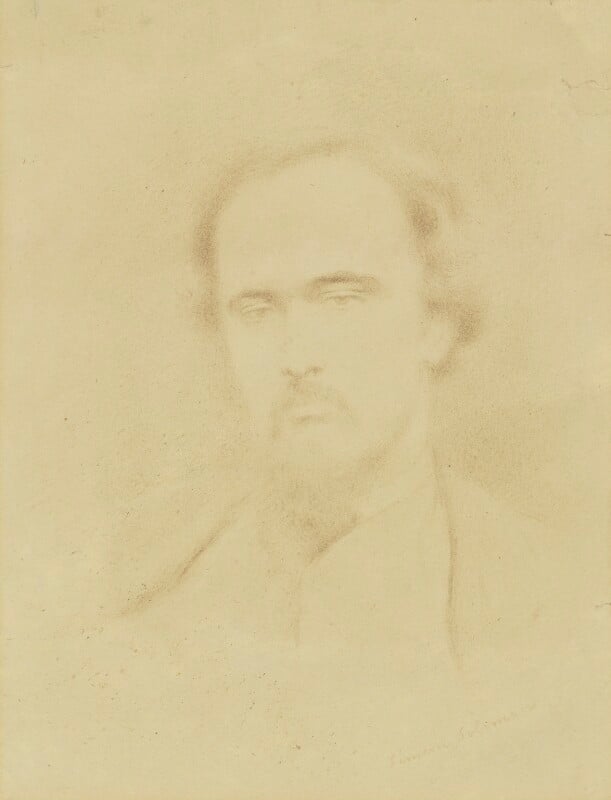 This very faint image is a photographic print of what appears to be a pencil drawing or tracing based on NPG P29, the photograph by Lewis Carroll. It was acquired together with NPG 1511, which is a similar item depicting Algernon Swinburne. Both were formerly owned by classicist G.C.W. Warr, who believed them to be original works in chalk by Simeon Solomon.

There is no record of Solomon making such images. Indeed, when contacted in 1909, Swinburne stated firmly, ‘I know nothing (& never heard before) of these “portraits” – except that mine was never taken or thought of.’[1] Rossetti’s brother William wrote at greater length:

I can’t recollect ever hearing that Simeon Solomon had done a portrait of my Brother or of Swinburne. You probably know something of the miserable story of Solomon’s career. My brother & Swinburne, also I, were housed together at 16 Cheyne Walk from Octr. 1862 to (so far as Sw. [sic] is concerned) some such date as 1865. In that interval of time (but beginning probably rather later than /62) they knew something of Solomon, who called occasionally at the house. If Solomon did any such portraits from the life, it appears to me likely that they belong to 1863 or 64….
Solomon’s style in art is of course very recognizable: &, if these drawings bear witness to his style, I must suppose that they are portraits from the life – but whether originals or photographed copies I cd. not conjecture. I don’t seem ever to have known anything of Prof. or Mrs. Warr … P.S. I feel almost positive that I never saw any portrait of my Brother by Solomon.’ [2]

By the date of this letter, the works had been identified as photographic prints and in February 1916 a note was made in the National Portrait Gallery stating ‘These two portraits are recognized by Mr Edmund Gosse as enlargements of comparatively well-known photographs.’ [3] But NPG 1510 is not obviously a simple enlargement, since the head is isolated and the outlines are not precisely aligned with those in the photograph, besides being rendered in very soft focus. A photograph from a copy drawing seems therefore more probable. The date could be any time from 1864 to 1900, with the 1890s perhaps the most likely. Although no drawing relating to NPG 1510 is now known, a red chalk version of NPG 1511, described as ‘offset from a drawing’, is in the Fitzwilliam Museum, Cambridge. [4]

Can the original of NPG 1510 have been created by Solomon? The inscription is not his signature, but it is just possible that during his destitute years he made images from photographs of his two famous former friends, and that photographs of these found their way to Warr, who was certainly convinced of their authorship. Warr kept both images together with a printed notice headed ‘Simeon Solomon’s Works’, quoting parts of Swinburne’s praise of Solomon from the Dark Blue magazine, July 1871, where it appeared with an engraving after Solomon. [5]

Overall, however, the connection between NPG 1510 and Solomon is tenuous, resting largely on the added inscription. As no original drawing is known, the image was presumably created by an unknown hand, working from a published photograph. The likeness is curiously similar as regards the hair to a work illustrated in 1905, which was described as ‘from Pencil Copy of Miniature by Cecil Schott’.[6]

1) Copy of letter from A.C. Swinburne to Lionel Cust, 13 Feb. 1909, NPG RP 1510; original transferred to BL, London, Add.Ms 54224-6.
2) Letter from W.M. Rossetti to L. Cust, 21 July 1908, NPG RP 1510.
3) Label by C.J.H[olmes], Feb. 1916, removed from backboard; see NPG RP 1510.
4) Said to have been ‘once in possession of Dawson’s of Pall Mall’, measuring 207 x 143mm, dated ‘c.1863’; Fitzwilliam M., Cambridge, 770.
5) Swinburne and Solomon were close friends until the latter’s public disgrace in 1873. One conjecture would be that Warr first heard of Solomon through the Dark Blue (a short-lived serial associated with Oxford University) and acquired the images of Rossetti and Swinburne at a later date. Little is known of Warr (23 May 1845–21 Feb. 1901) but in 1887–8 he collaborated with Walter Crane on a graphic musical version of Greek myths from Homer and Aeschylus, with 82 designs by Crane and essay and sonnets by Warr (Echoes of Hellas: The Tale of Troy and the Story of Orestes from Homer and Aeschylus, with pianoforte arrangements, publ. in two parts by Marcus Ward & Co., London). Around 1894 he acquired A.F.A. Sandys’s Helen of Troy, which was bequeathed by his widow to the Walker AG, Liverpool (2633).
6) Barrington 1905, fig.3. No such portrait miniature is known. Cecil Schott was Fanny Cornforth’s step-son, whom Rossetti had encouraged to pursue an artistic career, and was sometime studio assistant to G.F. Watts.