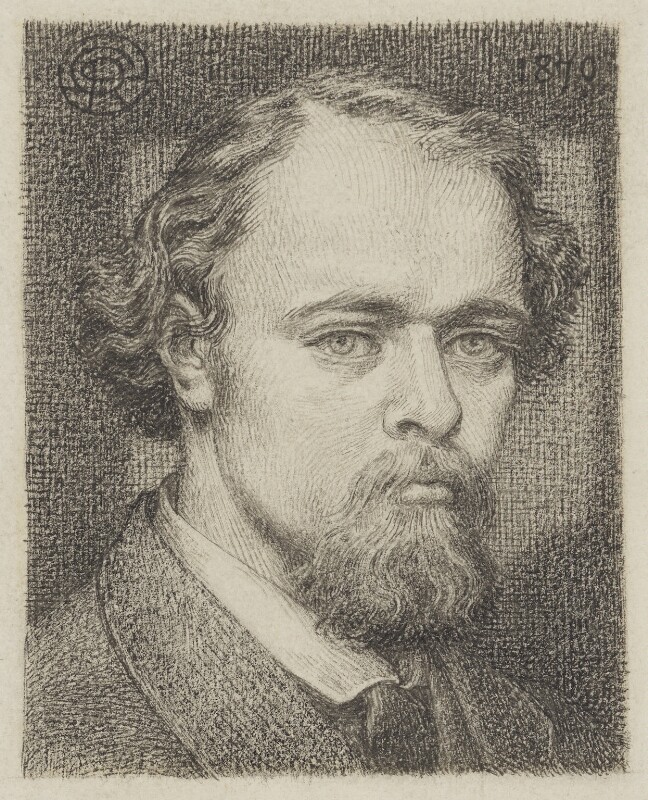 (b) small envelope inscr. in ink: ‘William Michael Rossetti’s / criticism of his brother Dante / Gabriel Rossetti’s portrait of / himself (within this frame) / [Executed in 1870] / written in 1889, and published / in the Magazine of Art’. Inside, a folded sheet of typescript headed ‘From the third article on “The Portraits of Dante Gabriel Rossetti” by William M. Rossetti in the Magazine of Art 1889, p.138’ and quoting a long section from this article, beginning ‘We now come …’ and concluding ‘…if they do.’

Over the years, this small work has been variously described as a drawing in pen and ink, a pencil drawing and an etching. The latest inspection describes the medium as ‘watercolour and ink on textured paper’ and the work as ‘Drawing for publication as a print. Faint grey under-drawing in pale watercolour. The image has been worked over the top in rich, thick, shiny black media, possibly a black ink with a high proportion of shellac. The thick media, applied to textured paper, ensures that all areas of the drawing are broken up into halftones of white and black, enabling a print to be produced using this image.’ [1]

Owing to the inclusion of the sitter’s monogram at top left, from its first appearance in the 1880s it was also described as a self-portrait, both by its first recorded owner Marion Harry Spielmann and by the sitter’s brother William Michael Rossetti. It was also listed as such by Virginia Surtees in her catalogue raisonné of Rossetti’s oeuvre (Surtees 1971, no.439) and the catalogue for the Royal Academy exhibition in 1973. [2] Around 1987–8 the medium was reclassified, probably on inspection prior to being loaned to Ramsgate Library, when it was described as an etching, but the attribution remained.

The labels removed from the frame give various details of its provenance and history, which are discussed below.

In his 1889 account of portraits of Rossetti, his brother William wrote

We now come to an example of foremost interest – the small pen-and-ink portrait of Rossetti by himself, which forms our next illustration. It belongs to the Editor of the Magazine of Art. This small portrait, three inches and an eighth by three and seven-eighths, was executed in 1870, with much precision and minuteness of touch. It is certainly a fair likeness, and may be called a good one, though I think my brother has not been quite just to his nose in giving it something of a bumpy or protuberant tip – a disadvantage which it assuredly did not possess. The expression, though concentrated, is quiet, as of a nature rather solid and acute than fervent and high-strung. In this respect also I think it falls a little short; it tells a minor truth, and does not fully emphasise the major one. But perhaps the reader will be more disposed to accept the evidence of Dante Rossetti, in the form of delineation, than that of William Rossetti, in the form of verbal comment; nor can I complain if they do so. [3]

Despite this endorsement of the work as a self-portrait, some features, together with William Rossetti’s reservations regarding the likeness, prompt reconsideration of the attribution. The reasons for this are as follows.

No contemporary record of its execution exists in Rossetti’s correspondence or other documents. It appears to have been unknown to his brother until its posthumous emergence. Moreover, during the early months of 1870 Rossetti had problems with his eyesight that obliged him to stop painting and drawing.

The internal evidence is inconsistent. The image does not seem drawn from life in or around 1870, since the features portrayed are more youthful than those in photographs from the early 1860s; see, for example, that taken by W. & D. Downey in December 1863 (see ‘All known portraits, Photographs, 1863, pose [d]’). By 1870 the hairline had further receded and the cheeks grown plumper. (A curiosity is the short shaded bar extending from the sitter’s left eye out beyond his cheekbone, which is not easy to explain physiologically.) However, the features do generally accord with those in self-portraits executed in 1855 and 1861 (see ‘All known portraits’), and portraiture is often inexact without being inaccurate. The angle or viewpoint is consistent with a self-portrait drawn using a mirror.

Compositionally, the framing of the head against a lighter square within a dark background, as if indicating a light through a window in front of the figure, complete with a shadow behind the shoulder, was frequently deployed by Rossetti in this period, for example, in a contemporaneous pastel showing Fanny Cornforth (first presumed owner of NPG 3033) holding a fan and a chalk drawing of La Donna della Finestra, both signed and dated 1870, and most notably in the oil painting of Proserpine (begun 1871).[4]

While the medium of thick black ink is not otherwise known to have been used by Rossetti in this period, the dense cross-hatching on a vertical and horizontal grid is seen in two earlier portrait drawings, those of William Holman Hunt from around 1851–3 (Surtees 1971, no.341) and Annie Miller of 1860 (Surtees 1971, no.354). Other aspects of the graphic style, such as the regular curving lines on the face, seem uncharacteristic of his hand. As William Rossetti acutely noted, the expression in the drawing is blander than would be expected, and the presentation is conventional. The very minute and precise drawing is also hard to reconcile with Rossetti’s complaints of poor sight, including double vision, in this period, although that may have interfered more with painting than with close, almost miniature, work like this.

Understanding is further complicated by evidence of a second image, showing Rossetti full-face in the mode of the Downey photograph cited above, but with slimmer cheeks. This is known only from a photographic negative (see ‘All known portraits, Possible self-portraits, c.1870’) and almost certainly derives from an untraced drawing based on the earlier photograph. [5] Its lines, hatching and framing are comparable to those in NPG 3033, as are the clothes – collar, tie and jacket – portrayed.

The existence of two similar images may help towards an explanation of the purpose of the present work. The dimensions of both NPG 3033 and its support are consistent with an octavo book (those of the untraced item are not known). In early 1870, Rossetti was preparing his first collection of poetry for publication, with his usual anxiety and perfectionism. [6] Poems appeared in April, and thanks to his preparations was widely and favourably reviewed. It went into several editions, mostly with minor amendments, and in 1873 was reissued in Germany by Tauchnitz Ltd with a critical introduction. None of the editions contained any graphic images. [7]

There are, however, some hints that Rossetti did contemplate including some illustrative material. He had some experience of drawing for wood-engraving, [8] and for his earlier volume of translations, The Early Italian Poets from Ciullo d’Alcamo to Dante Alighieri (1861), he had designed an abortive title-page illustration, which exists as an extremely rare relief print. [9] For Poems (1870) he took pains to design and supervise a decorative binding, and considered including on the title-page a device depicting sun, moon and stars, which was sketched into one of the many proof copies. [10]

Moreover, a photograph of some subject was considered in relation to a proposed de luxe edition of the volume. On 1 June 1870, Rossetti wrote to the publisher F.S. Ellis: ‘About the white-&-gold copies, which are to have the photograph? Has anything been done towards these? I must see immediately about the photo.’ [11] However, no copies of this limited edition, stamped in gold on white buckram boards, includes any illustration and there are no further references to a photo.

The present work may thus have been a design projected but not used as a frontispiece portrait. Alternatively, as suggested by bibliographer Mark Samuels Lasner, ‘the drawing was meant to go in the book – but in a unique copy, say to be presented to Jane Morris’.[12] It would then represent a proposed addition to a presentation copy, the most likely recipient being the woman who had inspired the majority of the poems. [13]

Such an explanation would also account for the scale of the drawing and precision of the draughtsmanship, even perhaps for the manner in which the lines mimic engraving. It might also help to date the work securely to 1870, when Rossetti and Jane spent some weeks in daily contact in Sussex, immediately prior to the book’s publication. On balance, therefore, NPG 3033 is probably an autograph work, despite the enigmas.

Not presented to Jane Morris, it was first shown after Rossetti’s death, at a private exhibition of works in the possession of Sarah Schott, better known as Fanny Cornforth, Rossetti’s longtime model and companion, which took place shortly after the official memorial exhibitions at the Royal Academy and Burlington Fine Arts Club. [14] When and how she obtained it remains obscure. A note formerly attached to the work states that Spielmann acquired it during the 1880s (i.e., between 1883 and 1889) from a dealer with whom it had been pawned by Charles Augustus Howell, Rossetti’s sometime friend and agent. The most likely sequence is that Howell acquired it from Fanny and her husband John Schott, before pawning it for ready cash, perhaps because he had no legal right to sell it. [15]

Rossetti’s brother and executor W.M. Rossetti would have seen it at the Schott show, but probably only inspected it closely around 1888, prior to its publication in the Magazine of Art (edited by Spielmann) where it appeared with his own article containing the carefully qualified assessment of the likeness quoted above.

It was acquired by gift with other items from Spielmann’s collection.

Head-and-shoulders, slightly to right, with moustache and goatee beard.