9 of 29 portraits of Dante Gabriel Rossetti 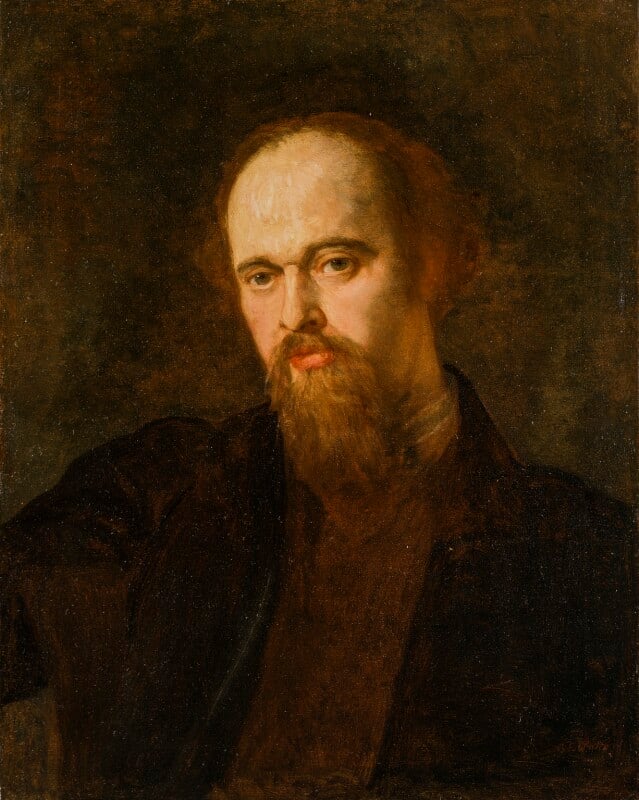 This portrait was intended for George Frederic Watts’s series now known as the Hall of Fame, but as it was never ranked highly therein it has been seldom reproduced or discussed; unlike others, it has therefore not become an iconic likeness of the sitter, despite the paucity of portraits of him.

Artist and sitter had been acquainted since the early 1850s; they had many friends in common, and were on congenial if not close terms. In 1866, for example, Rossetti gave warm support for Watts’s election to the Royal Academy, writing, ‘had things gone as they should, you would have taken early a place suited to youth among them…’ [1] In 1870 he included Watts among the recipients of a complimentary copy of his Poems. [2]

The previous year Watts had responded to a studio invitation from Rossetti with the words, ‘I have been constantly on the point of going to see you, as I am always anxious to know what you are doing, but you and I are not good at visiting! If I am able to get round to Cheyne Walk on Friday or Saturday it will be between 11 and 2…’[3] Late in life, he wrote to William Holman Hunt of the Pre-Raphaelite Brotherhood: ‘I should certainly have joined your Fellowship, being proud to remember I always understood and acknowledged its value.’ [4] It is stated that he admired Rossetti’s poetry more than his painting, [5] and that the decision to paint the portrait followed shortly after the publication of Poems in late April 1870. [6] The portrait appears to encompass both talents, however, emphasizing Rossetti’s domed forehead as well as his penetrating gaze. Moreover, Watts probably planned the portrait before the publication of Poems; his current group of sitters included Edward Burne-Jones, [7] William Morris (NPG 1078), John Everett Millais (NPG 3552) and Frederic Leighton, and he customarily spoke of Rossetti in equal terms, as an undoubted genius.

The portrait will have been painted in Watts’s studio in Little Holland House, home of Thoby and Sara Prinsep. The exact date is unrecorded but was probably soon after 9 May 1870, when Rossetti returned to London after two months in the country recovering from vision problems. At age 43, he was enjoying new fame as a poet, and about to resume painting. Five years later, misremembering the date, he wrote, ‘Some four years ago, Watts R.A. painted a head of me for which I only gave him two sittings and which remained unfinished.’ [8] As was his practice, Watts worked on an absorbent ground prepared by Winsor & Newton (whose canvas stamp is on the reverse of the present work) from a blend of whiting, size, honey and a small quantity of pale oil. [9]

Rossetti recalled the work unfavourably: ‘My impression of it was appalling (though probably from its exact truth) and people ever since kept telling me it was horrible.’ In 1875, however, he sought to obtain the portrait:

Accordingly the other day I executed a coup de main. I took a spare chalk drawing, and sent [H.T.] Dunn with it to Little Holland House, sending him [G.F. Watts] also a note in which I said I would be much obliged if he would make an exchange as I wanted the portrait (not for myself) and that the bearer would call next day at the same time for it, to save him trouble. This resulted in my getting the picture next day, though poor W’s note with it plainly showed that it was even as a tooth out of his jaws.

The portrait belied his memory, for while the background and figure, wearing his usual black coat, are thinly painted in dark, generalized tones, in order to highlight the features, the work was finished. ‘Now that I’ve got it I really think it very fine and am quite ashamed to have played him such a trick,’ [10] he added, before writing apologetically to Watts:

On seeing the portrait anew, I really felt I had asked too much of you. I remembered it only as a beginning, and had no idea that it was so happy and brilliant an example of your work, or a framed picture so near completion. In proposing the exchange I wished for it in order to make a present, having always found it impracticable to paint my own portrait. Were it not for this I must in conscience have offered it you back again, seeing the utter inequality of the exchange as it stands; but things being thus, I will instead beg your acceptance of some further memento of my work, such as it is… [11]

My dear Rossetti – It gives me infinite pleasure to find you like the picture. We will not bandy compliments or I might tell you how much I value your drawing. I cannot think you indebted to me and should be very unwilling to take anything more from you in return; that would be to rob you of your time and labour, a very unjustifiable sort of proceeding, though of course I should like to possess any number of your works. [12]

The proposed recipient of Rossetti’s gift is thought to have been his patron F.R. Leyland, who did not, however, acquire it at this date. [13] It is unlikely to have been intended for Rossetti’s former companion Fanny Cornforth (later Mrs John Schott) but a year later he made it over to her, perhaps in lieu of a monetary gift, writing a formal note stating, ‘The portrait of myself painted in oil by G.F.Watts R.A. which is now at 16 Cheyne Walk is the property of Mrs Sarah Hughes and can be taken possession of by her at any time during my life or after my death.’ [14] Although Fanny took possession of the work sometime between 1876 and 1882, the gift never seems to have been openly acknowledged. According to Rossetti’s brother William Michael, ‘My full and genuine belief is that Gabriel never gave it to Mrs Schott, but only, not much liking it, transferred it from his own hands and house to hers.’ [15] It was not found in Rossetti’s house at his death.

It was first exhibited in the Rossetti memorial exhibitions during the winter of 1882–3,[16] followed by the privately organized show of works in the possession of Fanny and her husband held at ‘The Rossetti Gallery’ (hired premises in Bond Street) in May 1883, [17] where a subscription was opened to have the work engraved; this was not immediately accomplished, for unknown reasons, but perhaps due to potential challenges to the Schotts’ uncertain legal title. [18] Sometime in the next few years it was acquired by Leyland, reportedly from a pawnshop. [19]

It was first discussed (unillustrated) in early 1889, with this account by W.M. Rossetti:

Mr Watts produced the picture for his own satisfaction, treating my brother as one of the ‘distinguished men’ to whom he accorded this honour; and he presented it to the sitter. It is a completed yet not elaborately-finished work. To my thinking, the picture is well worthy of its pre-eminent author, but it is not one of the most conspicuously successful of his portraitures; some are more admirable as works of art, and several more striking as likenesses. My brother himself valued the picture, but did not absolutely acquiesce in it as a resemblance. The complexion and the hair appear to me somewhat too ruddy for that period in my brother’s life, and the expression comes nearer to settled placidity than was consistent with either his aspect or his nature. My brother was, in fact, though a tolerably easy-going, still a vehement man; in his character there was more of impulse than I recognize in Mr Watts’s portrait, and in his expression more of stress, though not strain. If his element was not that of ‘Stürm und Drang’, neither was it ‘the shadow nor the solitude’. [20]

He added, however, that when seen in 1883, the portrait ‘impressed me much more deeply and pleasurably than it had done in earlier years. I found it a fine work, bearing good witness to the painter who produced it, and to the other painter whom it records.’ [21]

In fact, though the likeness is a matter of judgement, the technical aspects leave more to be desired. Owing to the absorbent ground and thin paint layers, varnish has penetrated the support, the image has become visible on the reverse and the paint surface is friable.

Around 1890, while the work was in Leyland’s ownership, Watts made a replica copy, perhaps in preparation for the New Gallery’s Victorian Exhibition the following year, where it was shown alongside portraits of eminent men, mainly by himself, Millais and William Blake Richmond. Frederic George Stephens was scathing, describing it as ‘Mr Watts’s one and only complete failure’. [22] W.M. Rossetti hastened to disagree, writing to the artist:

Will you allow me to express my thanks to you for that very beautiful portrait of my brother? I looked on it long with deep interest and satisfaction. It will continue to long distant years to represent my brother to his countrymen in the most advantageous light, and a truthful one too. Certainly in that Victorian Exhibition you have made my brother shine forth pre-eminently among his contemporaries, both for aspect of genius and for those attractive qualities which one might associate with mental superiority. [23]

In further correspondence, he wrote:

I scarcely know whether or not to agree with you in preferring it to the original likeness which Leyland owned. I think the original exceeds (as was natural under the circumstances affecting the two cases) in the look of personal presence and actuality; on the other hand I think that the duplicate exceeds in suavity of expression, and in the sort of beauty which accompanies this, and that it is not less of a definite likeness. [24]

In May 1892, the present work was sold from Leyland’s estate. At the end of that year, the new owner, Liverpool businessman James Smith, agreed to an exchange with the artist whereby Watts regained the original, apparently in preparation for his plan to present the Hall of Fame to the National Portrait Gallery. [25] He told Smith, ‘I think it better to give the nation the one actually painted from life ... [of] one of our very greatest geniuses (time will I am sure so regard him).’[26] Watts received the original on 10 January 1893, the same day that he told Smith that the replica would arrive ‘in a day or two. I will, if I can find it, send you William Rossetti’s letter [quoted above] which you may like to see and perhaps copy.’ [27]

In December 1895, the original was among the seventeen works (NPG 1000–1016, including portraits of Tennyson, Carlyle, Shaftesbury and Browning) presented by Watts – then a Trustee of the Gallery – in anticipation of its move to the new building in St Martin’s Place. Presumably around this date, it was reproduced in photogravure by Frederick Hollyer,[28] one print being presented by William Rossetti to the city of Vasto, Italy, the Rossettis’ ancestral home. In 1923 the replica oil was bequeathed by Smith to the Walker Art Gallery (Liverpool M., 2134).

In more recent opinions, the work has been seen through the lens of biography. It is noted, for example, that by 1871 Rossetti had ‘serious health problems’ and that the portrait records ‘signs of premature ageing … his hair is receding and his face careworn’. [29] It is more likely that Watts intended the expression as pensive, with intimations of artistic contemplation. For whatever reason, the portrait remains relatively unfamiliar and is seldom chosen for exhibition or reproduction in relation to the sitter or the Pre-Raphaelite movement.

The artist, from whom acquired by sitter by exchange 1875; Fanny Cornforth; bought ‘from a pawnboker’ by F.R. Leyland, c.1883; his sale 28 May 1892 (47); bought James Gow; bought James Smith, Blundellsands, near Liverpool; returned to artist by exchange; presented 1895.

Other reproductions of the image
Marillier 1899, frontispiece (from photogravure by Frederick Hollyer).

On display in Room 26 at the National Portrait Gallery