2 of 3 portraits of Theodore Watts-Dunton 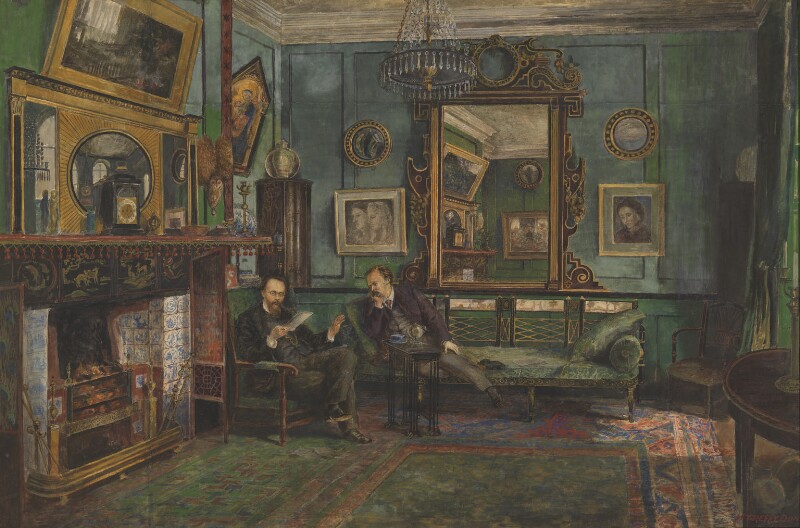 In his last years, Rossetti was strongly opposed to sitting for any portraits. This work is a posthumous portrait of Rossetti at home in 16 Cheyne Walk, executed by his former studio assistant, who, according to William Michael Rossetti, in summer 1882 ‘made an interesting and pleasant water-colour of the small dining-room of the house, with all its curious and tasteful appurtenances of furniture [into which] he introduced small whole-length figures of Rossetti reading one of his poems (we may suppose “The King’s Tragedy”) and of Mr Theodore Watts as the listener.’ He continued: ‘The general likeness of Rossetti is here fairly given, on its small scale; but the upraised right hand with which he accompanies or enforces his delivery of the verses is not, I think, characteristic; it may rather be regarded as a means of intimating to the eye that the personage is reading aloud.’ [1]

The artist later described his initial impression of the room:

one of the prettiest and most curiously furnished old-fashioned parlours [with] mirrors and looking glasses of all shapes, sizes, and design … Whichever way I looked I found myself gazing at myself. What space there was left was filled up with pictures, chiefly old and of an interesting character. The mantelpiece was a most original make-up of Chinese black-lacquered panels bearing designs of birds, animals, flowers and fruit in gold relief … On either side of the grate were inlaid a series of old blue Dutch tiles, mostly of biblical subjects done in the serious comic manner that existed at the period. The firegrate was a beautifully wrought specimen of 18th century design and workmanship with fire-irons and fender to match. In one corner of the room stood an old English china cupboard; inside was displayed a quantity of Spode ware. I sat myself down on a dear little cosy sofa with landscapes and figures painted on the panels of the Cipriani period. [2]

Among the pictures included in the present view are two large chalk drawings of Rossetti’s mother and sister from 1877, the double portrait being NPG 990. The ebonized chair with red detailing to the right is an example of the ‘Rossetti chair’ designed for sale by Morris & Co., of which D.G. Rossetti was an original partner. Also visible, to the right of the overmantel is a stuffed owl, presumably one of his former pets.

According to the label apparently signed by the artist, the scene is of a ‘Parlour in Rossetti’s house / Rossetti reading his poems to a friend previous to their publication’. [3] Rossetti is shown holding a gathering of proof-sheets, with other pages on his knee and on the floor. His companion from 1879, Theodore Watts-Dunton (NPG 4888), was a lawyer and literary writer on whom Rossetti relied for advice and friendship in his last years. He is also known for taking the alcoholic Algernon Swinburne into his own household in Putney in 1879.

Henry Treffry Dunn acted as studio assistant to Rossetti from 1867 to around 1878; sometime later they resumed ‘amicable business and personal relations’ and it is possible that Dunn was present at a moment in 1881 when Rossetti’s new poetic volumes were being prepared for publication. [4] But the scene depicted was drawn from memory, not from life (see ‘All known portraits, By other artists, mid-1880s’ for Dunn’s posthumous oil portraits of Rossetti). After Rossetti’s death, Dunn was engaged to look after the house at 16 Cheyne Walk and prepare items for the studio sale, which took place in July 1882. Sometime before that date, and perhaps at the suggestion of Watts-Dunton, Dunn made watercolour views of four interior rooms: the drawing room, Rossetti’s bedroom, the studio and that in the present image, variously described as a parlour, sitting room and ‘small-dining room’; the last is the only view into which figures were placed. [5]

All four drawings were sold from the Watts-Dunton estate, together with one version of Dunn’s portrait of Rossetti, several drawings by Rossetti, correspondence from him to Dunn between 1872 and 1879 and the manuscripts of Dunn’s ‘Recollections of Rossetti and His Circle’, an incomplete memoir first published in 1904. [6] Like Swinburne, as a recovering alcoholic, Dunn lodged in Watts-Dunton’s home before his death.

According to Thomas Hake, whose brother had helped care for Rossetti during the 1870s and who described the setting as the ‘green’ dining room, ‘this is the only portrait of Rossetti that really calls up the man before me’. [7] As W.M. Rossetti’s assessment above indicates, he was less persuaded of the likeness.

The support is in three pieces, one main and two subsidiary pieces running the full height at the left and the full width at the top, as if the artist had enlarged his sheet to include more of the setting; had this been so, however, his original composition would have positioned the main sitter well to the left, and omitted most of the fireplace as well as the ceiling and chandelier, so it may be that the enlarged sheet was prepared before drawing began. Overpainting is visible at the paper joins. Curiously, the artist misspelt his own name in the signature.

The drawing is in a heavy reeded water-gilt oak frame, which appears to date from the period when it was in Watts-Dunton’s possession. The card to which the support was previously attached was removed and replaced in 1990.

1) Rossetti 1889a, pp.139–40. Although D.G. Rossetti’s brother knew the house very well and his identification of the room is not to be doubted, the scene portrayed would appear to be a larger room, with a second fireplace: reflected in the tall mirror behind the sitters is a facing wall and part of a matching but not identical overmantel, surmounted by a different painting, and illuminated by light from a second full-height window to the right of the picture space.
2) Dunn 1984, p.14.
3) NPG RP 3022.
4) Poems and Ballads and Sonnets (both 1881). In March D.G. Rossetti consulted W.M. Rossetti on alternative titles for ‘The King’s Tragedy’ and in May sent his brother proofs for checking.
5) For images of the drawing room and bedroom, see Treuherz et al. 2003, figs 173 and 174.
6) ‘Sale of Artistic and Literary Property removed from “The Pines” 11 Putney Hill…’, Sotheby’s, 22 Mar. 1939 (47). The views of drawing-room and bedroom were exhibited in Dante Gabriel Rossetti, Walker AG, Liverpool, 2003 (173 and 174); that of the studio is currently untraced.
7) T. St.E. Hake, ‘Aylwin’, Notes & Queries, second ser., 7 June 1902, p.450. This article confirms that the drawing was in Watts-Dunton’s possession at this date.

Whole-length, seated in armchair, wearing spectacles, reading from sheet with companion on right, half-reclining on sofa.