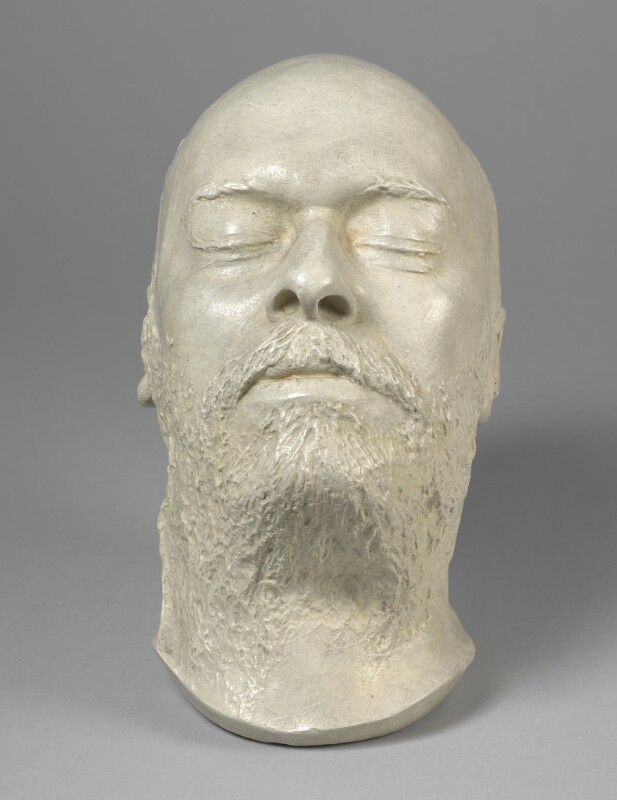 ‘If I die suddenly at any moment … [l]et no cast be taken on any account of my face or head,’ wrote Rossetti in 1876. [1] He died six years later, on 9 April 1882 at Birchington, Kent, where family members had gathered for his last days. The following day, Easter Monday, his mother’s diary records that ‘a telegram sent by William [Rossetti] brought from London a man from Brucciani’s to take a cast of Gabriel’s head and hand. Gabriel looked quite peaceful, with a tendency towards a smile.’ [2] The decision was William’s: as he wrote three days later, ‘On Monday I got the face and hand moulded – a thing which ought not to be omitted for men of a certain degree of mark.’ [3]

The mould/s appear to have been taken virtually in the round, including both ears and some hair behind them, the back of the head only having been completed without a mould. The neck forms the base, but requires support for the head to be upright, and as the present cast has no other base, the head lies back, as in a coffin.

Brucciani’s was the Galleria delle Belle Arti, the noted shop established by Domenico Brucciani (d.1880), then in Covent Garden. The plaster moulds were taken from Birchington to the workshop, where plaster casts were produced and delivered to William’s home in Endsleigh Gardens. The exact number of original casts is not known; in 1885 when Brucciani’s could not locate the moulds, William lent his originals, from which new moulds were prepared, but it is not known if any second-generation casts were made. [4] The new moulds were subsequently destroyed by bombing during the Second World War. In 1894, ‘three or four copies’ were said to have been originally cast, of which one belonged to William, one to Hall Caine and one (probably) to Theodore Watts-Dunton. [5] Then in the possession of the donor, Alice Chambers, the present copy must represent the fourth. One now in Princeton University Library, bequeathed by Janet C. Troxell, is that formerly with W.M. Rossetti. [6] The present cast is somewhat finer than others, with smoother skin surfaces and crisper eyebrows, but the differences are not significant.

Later, William recorded his opinion of the original: ‘These casts [i.e. of head and hand] were taken with no less skill than that with which the Brucciani firm always command; but it is a fact that the head proved extremely disappointing to all of us, and seems barely to suggest what my brother was like.’ [7] He also wrote: ‘I should say that my family and myself do not at all like the version of my brother’s face presented by the mould and cast. In especial, singular though it may sound, the dimensions of the forehead seem woefully narrowed and belied. But of course, from a certain point of view, the cast tells truth of its own kind.’ [8]

The donor, Alice Mary (‘May’) Chambers (b.1855) was an artist closely associated with Charles Augustus Howell, D.G. Rossetti’s former friend, whose executor she became in 1890, but it is not clear from whom she acquired the mask. In 1913 she wrote from Vincent Square, London, offering to the National Portrait Gallery the ‘post mortem cast of the head of the late Dante Gabriel Rossetti, Poet and Painter’, explaining that it was given to her ‘by a friend of Mr Rossetti’s about 25 years ago’. [9] In a second letter she added, ‘I was informed that it was taken for purposes connected with the statue afterwards executed…’ [10] To an enquiry as to the maker, W.M. Rossetti replied briefly to the NPG director that ‘That death-mask was taken by the Brucciani firm at my order. Some mention of made of it in my Memoir (p.400) of my Brother, annexed to his Family-Letters’. [11]