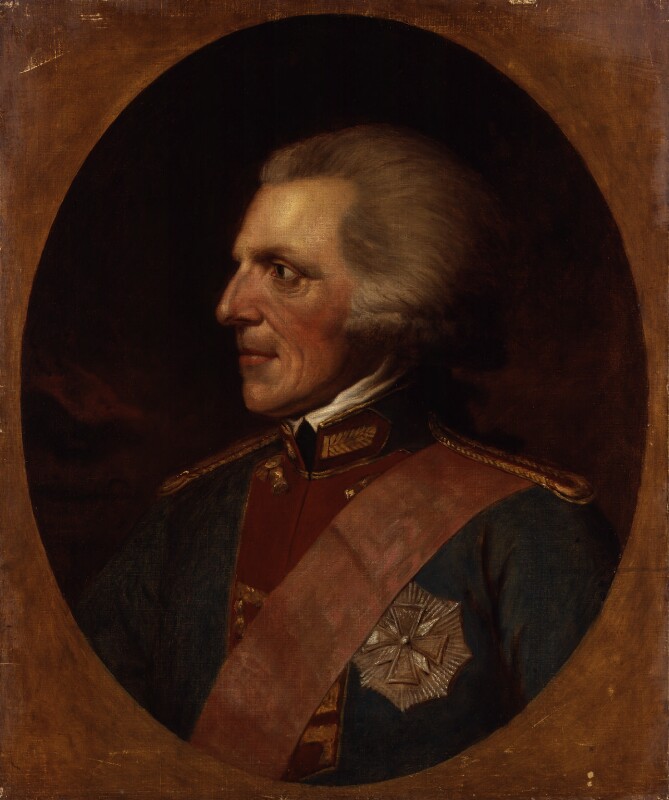 The portrait is a free copy of an original painted by Kellerhoven in Munich in 1792 probably for the Elector Karl Theodor and now in the Kurpfälzisches Museum, Heidelberg. Other copies are in the Royal Institution, London, presented by his daughter the Countess Rumford in 1835, and in the New Hampshire Historical Society, Concord, bequeathed by the Countess in 1852. Neither the original nor the copies bear any visible inscription or date but the Concord version has a paper label on the back, written by the Countess: 'This is the second-best likeness that was ever taken of Count Rumford - The Original from which this was taken being in the Royal Institution of Great Britain, this being besides an excellent copy [of] the picture done at Munich by K ... ph ... the Count about [40] at the time'. The broad pink ribbon over his left shoulder in the NPG copy is evidently a mistake, either intended for the poppy red Ribbon of St Stanislaus which should be worn over the right shoulder, or for the light blue Ribbon of the White Eagle which he wears in the Royal Institution and Concord versions; he also wears the light blue Ribbon in the Royal Society portrait by J. R. Smith. He had been knighted by George III in 1784, and at the request of the Elector the King of Poland had made him a Knight of the Order of St Stanislaus in 1786; in 1791, during an interval between Emperors, the Elector had made him a Count of the Holy Roman Empire and Knight of the Order of the White Eagle (W. J. Sparrow, Knight of the White Eagle, 1964, p 92). Rumford's Star of the White Eagle is in the Massachusetts Historical Society's collection.
NPG 1332 is probably the portrait referred to by his daughter in her bequest to Joseph B. Walker though in view of the date 1792 firmly stated in Rauschmayr's engraving it cannot be, as she says, 'at the time when he was sent as the Bavarian Ambassador to London' which was in 1796 (Complete Works with Memoir by the Rev George Ellis, 1876, I, p 649). Kellerhoven also painted Rumford's daughter in Munich in 1797. A miniature variant of NPG 1332, profile to left in scarlet uniform with blue Ribbon of the White Eagle, was at Christie's 16 December 1958 (63), engraved by Ridley for The European Magazine, 1 March 1797.

Head and shoulders to left in uniform as an officer in the Bavarian army (dark blue-green with red and gold facings, narrow red and gold shoulder-straps), broad pink ribbon over his left shoulder and silver Star of the White Eagle; powdered hair in queue, grey eyes, ruddy complexion; plain reddish-brown background, light brown at corners outside painted oval.

Early history unknown but it may have been one of the three portraits bequeathed by his daughter Sally (Countess Rumford) to a relation Joseph B. Walker (Dictionary of National Biography); B. B. Brook and bought from him 1902.

(Of the original)
Stipple by Rauschmayr lettered 'Gemahlt von Kellerhoven in Munchen 1792'; stipple by Mackenzie as plate in The Philosophical Magazine, IX; stipples by W. Hooker and C. Westermayr for German magazines.