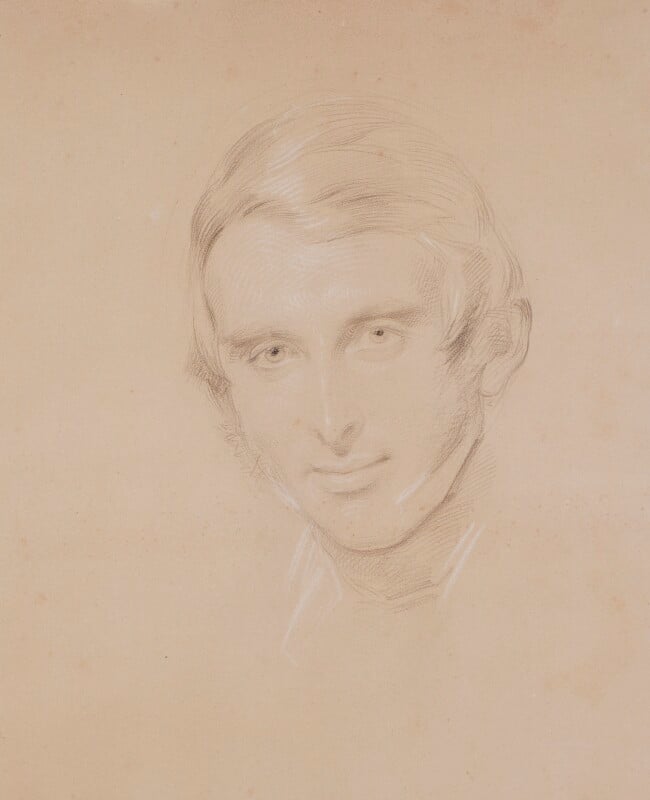 This portrait is a study for a now-destroyed chalk or pastel drawing.

The sitter first met George Richmond in Rome in 1840, and the two became good friends. After first dining with the Ruskins, Richmond told his wife that John ‘is a most pleasing man and of considerable power as a poet – with a good notion of art … I have promised to pay them a visit for two or three days to paint their son in the summer if all is well.’ [1] In 1843, Richmond produced a full-length portrait (see ‘All known portraits, By other artists’) and in 1857 Ruskin’s father John James commissioned a head-and-shoulders drawing. Seven sittings took place in February–March 1857, Ruskin snr paid Richmond £42 plus a case of wine, and the work was exhibited at the Royal Academy (737). According to Ruskin snr, ‘It is what Richmond says a portrait should be: The Truth Lovingly Told.’ [2] It portrayed the sitter’s right hand touching his cheek. According to Marion Henry Spielmann, Richmond the draughtsman ‘preferred to show us the gentleness, thoughtfulness and brilliance of the friend, rather than the vigour, the combativeness and the earnestness of the crusader’. [3]

Two studies for the commissioned portrait were made, [4] together with the present, slighter work, which displays the sensitive handling Richmond brought to his chalk portraits of young men in this period. As such, it perhaps make Ruskin look rather younger than his 38 years. The head is lightly and economically drawn, with the main definition on the eyes, especially their pupils. White is used as widely spaced hatching on the forehead, with some strokes in the hair and cheeks and a stripe down the nose.

The present work remained with Richmond until his death, when it was purchased from his executors for £3.5.0, together with fourteen drawings of other eminent Victorians. [6] An area of discoloured paper indicates its original mounting; outside this browned area, to the lower left, is a very faint bald head with a round face. The portrait was glazed and given a water-gilded ‘Richmond-style’ frame by F. Draper in August–September 1896.

Head only, to front.

George Richmond; his executors, from whom purchased 1896.