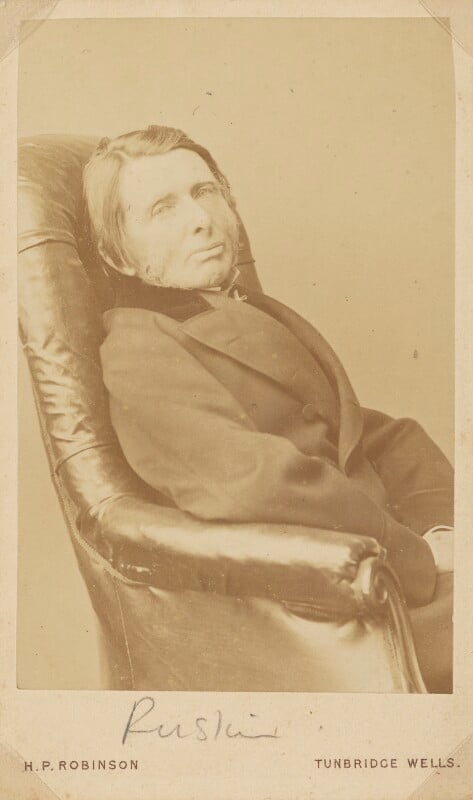 This image was taken by Rev. Charles Lutwidge Dodgson (now better known as the author Lewis Carroll) on 6 March 1875 in the photographer’s study in Christ Church, Oxford, the date being inscribed by Dodgson on a print sent to Mrs Alexander Macmillan and in his diary entry for the day, which noted that ‘with some difficulty’ Ruskin was persuaded to come and be photographed and stay for lunch. [1]

During his term as Slade Professor of Art at the University from 1870 to 1879, Ruskin was frequently in the city, although no particular event occasioned this, apparently casual, photograph. Three months later, on 3 June, Carroll again persuaded Ruskin to sit, for a more accomplished bust-length portrait (see ‘All known portraits’). The present half-length was, however, regarded by many as one of the best images of Ruskin. Joan Severn described it as ‘what I consider the best photograph done of the Professor – (by Dodgson, author of Alice In Wonderland) … He himself hates all portraits of himself.’ [2]

When friends requested prints of NPG P50, Carroll asked for permission from Ruskin, who replied with a quotation from his own writings, criticizing photographers for boasting of their sepia landscape prints. ‘But the sun had drawn landscapes before you, not in brown but in green, and blue, and all imaginable colours, here in England. Not one of you ever looked at them then.’ [3] He granted permission, however, and prints such as the present work were subsequently produced by Henry Peach Robinson, Tunbridge Wells.

The image was originally printed as a vignette, showing Ruskin’s hands in full, together with the chairback and part of the legs.

Half-length to right, looking to camera, seated in highback armchair.

conserved 1986, when described as severely faded, with surface dirt and some original re-touching