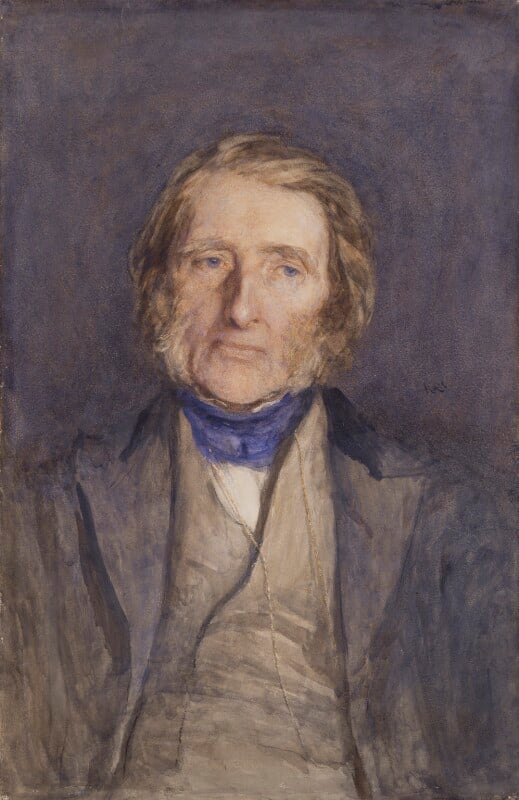 In 1879, Ruskin was aged 60 and had resigned from the Slade Professorship of Art at Oxford University. Herkomer was appointed as his successor but did not take up the position owing to ill health. In November he asked if Ruskin would sit to him for an etching. This was virtually simultaneous with sittings for the bust by Joseph Edgar Boehm (NPG 1053), as Ruskin reported. ‘Curiously, I gave equal carte-blanche to Herkomer, yesterday, who wishes to make an etching. I really hope, between them, there may be a little more kindly and useful truth known of me than from photographs.’ [1] The sittings commenced in Ruskin’s home at Herne Hill, south London. ‘I’ve been quite a prisoner to Mr Herkomer, who has, however, made a beautiful drawing of me, the first that has ever given what good may be gleaned out of the clods of my face,’ Ruskin reported on 1 December. [2] He is shown wearing his customary Oxford blue stock, a fashion maintained from his youth. Although the colour of his coat and waistcoat look as if they were made from grey homespun cloth produced by the Laxey Woollen Mills on the Isle of Man, an enterprise later supported by Ruskin, this is probably artist’s licence, as otherwise the garments resemble his usual frockcoat. [3] The blue-grey background harmonizes with these colours as well as allowing the delicate flesh tones of the face to pull forward.

Hubert Herkomer had established his reputation with subjects of contemporary social concern – perhaps partly in response to Ruskin’s essays – and in 1879 was elected ARA. He had not yet added the German prefix ‘von’ to his surname, as the signature testifies. On his appointment to the Slade professorship, he received a warm welcome from Ruskin, who wrote, ‘I cannot conceive anything more fortunate for Oxford, or indeed for England, than that an artist of your skill, honour and sentiment, should occupy that chair.’ [4]

seemed most anxious not to look at the painting until I had quite finished it; whilst sitting he was theorising about the methods of painting. I used in those days to paint abnormally large watercolours, and always covered the paper first with a wash of some ochre or grey, then sketched the subject with charcoal. I would then commence with a hog-hair brush, working up the ground colour with some fresh tones, and out of a kind of chaos produce a head. Ruskin queried even the possibility of this, and would hardly believe that my final outlines and delicate bits of drawing were put in last.’ [5]

This was the opposite technique to Ruskin’s own method of minutely observed outline and detail, to which colour was added. Herkomer claimed that, in order to prove his point, Ruskin ‘made repeated attempts to paint himself … between his sittings to me, but they were never openly shown’. [6]

Ruskin’s response to the finished work was that it was ‘full of character’ but ‘not like in the ordinary sense’. [7] The portrait’s inward gaze, no doubt allusive to Ruskin’s oracular writings, endows the sitter with a thoughtful aspect. Perhaps for this reason, it was felt to fail in conveying his strength of personality. To Marion Harry Spielmann it made him appear as ‘the philanthropist, quiet, kindly and self-possessed’, with ‘all the cheery gentleness and old-world sweetness of disposition that distinguished him’. [8] These were indeed qualities more evident in Ruskin’s demeanour and conversation than in his forceful, polemical writings.

The following year Herkomer sent the portrait to the Grosvenor Gallery, where a critic for The Spectator observed:

a clever portrait of a great man. This is one of Mr.Herkomer's water-colour works, done in avowed imitation of oils, and looks, indeed, sufficiently like the oils amongst which it is hung, to pass at first sight for one of the same medium. As a portrait, it possesses several qualities of merit ; as a picture, we confess that we see only one,—the luminousness, that is, of the bright blue eyes. The whole work seems to have been painted in a sort of mist, and all the features of the great Art critic seem a trifle blurred and indistinct. [11]

In The Academy, Cosmo Monkhouse noted that the portrait ‘does not err on the side of strength. It is gentle almost to weakness, sweet almost to insipidity, and shows little of that firm grasp of character which is so conspicuous in the same artist’s portraits of Tennyson and Wagner. It gives us Mr Ruskin’s purity without his passion. [12]

A critic in The Times mistook the medium, writing:

It is difficult to dissociate this picture, as regards the merit of this painting, from the interest which attaches to it as being the first oil portrait we have ever seen of our great art critic. We are inclined to dwell rather upon the face itself, upon its shrewd kindliness, its underlying scorn, and the slightly visionary expression in the bright blue eyes. The one observation which will, probably, occur to most of those who know Mr Ruskin, will be that all the features have been a little slurred over by the artist. However, when all deduction is made for this and for a certain lifelessness of colour, which is rather to be felt than described, the picture remains a fine one, and is, in our opinion, Mr Herkomer’s best portrait. [13]

There is, however, no oil version; only this work and a related drawing are recorded. Herkomer’s account detailing his watercolour technique is amplified by Spielmann’s observation that ‘This admirable portrait is nominally a watercolour; but that medium, strongly aided by body-colour, is reinforced with a pulpy substance.’ [14] Recent conservation reports do not note any such mixture in the medium.

NPG 1336 was exhibited several times in the decade after its creation, in Britain and in Germany. At the Dundee Fine Art Exhibition 1895, it was for sale at the high price of £800. In November 1902 the artist offered it to the National Portrait Gallery; he wrote asking if the Trustees ‘would be prepared to accept as a gift from me my portrait of John Ruskin – which is acknowledged as one of my best works? [sic] and whether in case they would accept it, a good place would be given it on the walls of the Gallery?’ [15] It was despatched on 20 January 1903.

It was first reproduced photographically (from Herkomer’s etching) in 1890–91. [16] In Spielmann 1891b and elsewhere a wood-engraving by William Biscombe Gardner was used. [17]

A copy by H.J. Harvey is recorded, together with a sketch that may be a preliminary study or another copy. [18]

Master Drawings from the National Portrait Gallery, London and seven other venues, 1993–4 (67).