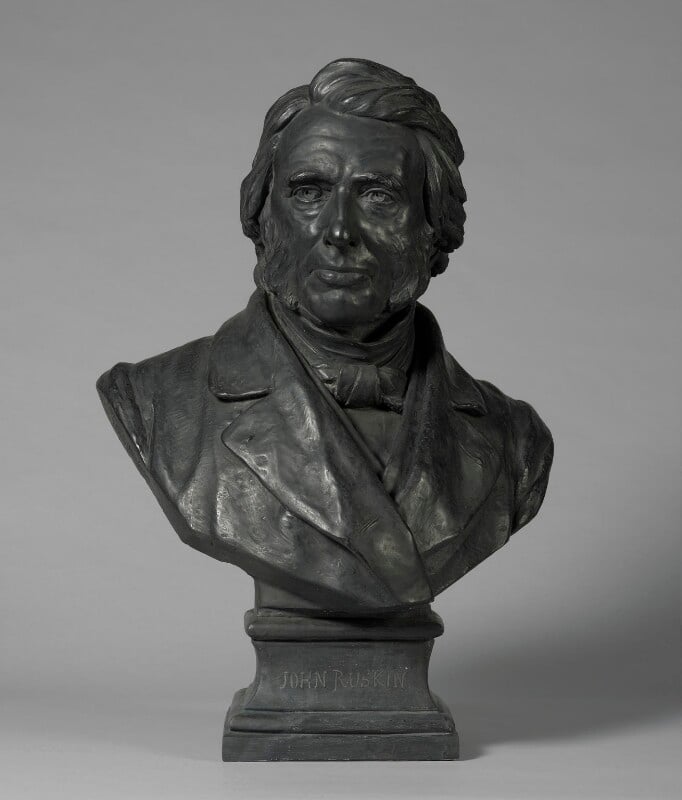 In 1879, following Ruskin’s resignation as Slade Professor of Art, friends in Oxford led by Dr Henry Wentworth Acland combined to commission a portrait statue for what had been named the Ruskin School of Drawing. The first stage in this process was to ask the sculptor Boehm to execute a bust. ‘I shall be only too glad to sit to Boehm anywhere and anytime he likes,’ Ruskin wrote in November 1879. ‘I suppose I shall have a line from him to-day or to-morrow, and will at once answer, making appointment.’ [1] Sittings began almost at once, Ruskin travelling daily to Boehm’s studio in Kensington. He approved of the likeness, saying it was ‘yet more like’ than Hubert von Herkomer’s drawing (NPG 1336) although adding that ‘my eyes are a loss’ in the clay version. [2] But he also distanced himself from the project. ‘I have nothing whatever to do with any manner of self-exhibition,’ he wrote. ‘Dr Acland asked me to sit to Boehm, and I did, to please Acland and because I wanted to talk to Boehm … Portraits of anybody are the last thing I ever think of and my own would be the last of those…’ [3]

Joseph Edgar Boehm was appointed sculptor-in-ordinary to Queen Victoria in 1880 and subsequently knighted. He had been introduced to Ruskin by Thomas Carlyle in 1875, when Ruskin reported that Boehm was ‘such a duck – The very ideal of noblest intense Germanism – with the grey gleaming eye, and inexhaustible will – rationalism – imagination – and bodily vigour….’ At that time, Ruskin also expressed the wish that Boehm ‘will like me, and ask to do [sculpt] me – that will be ever so much better than if I ask him … But if he doesn’t, I will.’ [4] In the event, no approach was made until Acland’s proposal in 1879.

Recalling Ruskin’s sittings, in 1890 Boehm commented, ‘I never saw any face on which the character and the inside of a man was so clearly written. He can never have tried to dissimulate.’ [5]

Created in clay, the bust was apparently cast into terracotta with two such versions being exhibited in May 1880, at the Royal Academy (1635) [6] and at the University Galleries (now Ashmolean M., Oxford). Boehm also produced a full-length ‘sketch’ or maquette in clay, which was to be created life-size. [7] The subscription list, headed by Prince Leopold and promoted by Acland, was launched in Oxford on 25 May 1880. Insufficient funds were raised, however; instead a marble version of the bust (595mm high without base) was carved, either by Boehm or a workshop. This was presented in 1881 to the Ruskin School of Drawing and Fine Art, Oxford, and transferred thence in 2001 to the Ashmolean Museum (WA2001.18). Inscribed ‘Hanc Johannis Ruskin Hujusce scholae fundatoris Effigiem Amici posuerunt MDCCCLXXXI’, [8] it represents the portrait’s primary version.

According to Marion Harry Spielmann, the likeness has a hardness of expression, showing ‘something of a misanthrope’ and ‘the scholar, the thinker and the disputant, rather than the man’. [9]

NPG 1053 was purchased in 1896 from George Howard, 9th Earl of Carlisle. [12] In the early 1880s, for Howard’s house Naworth Castle, Cumbria, Boehm had modelled a gesso frieze depicting the Battle of Flodden Field, to Edward Burne-Jones’s design, and it is possible that the bust was acquired by Howard through this connection.

When Boehm featured in Vanity Fair (Jan. 1881; see Boehm, ‘All known portraits’), he was drawn by Leslie Ward (‘Spy’) with Ruskin’s bust on the turntable.

9th Earl of Carlisle, from whom purchased 1896.

Reproductions of other versions of this image
Cook 1890, frontispiece.