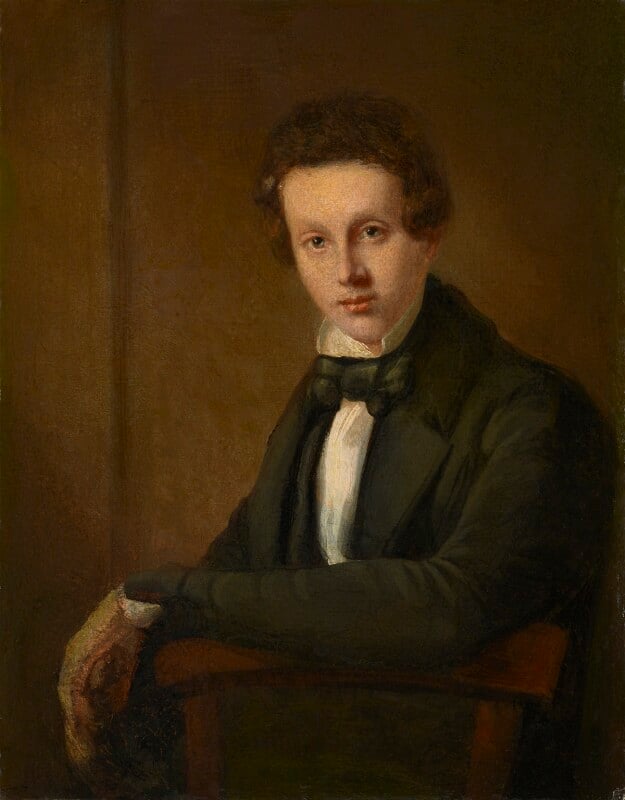 In 1848 Frederick Sandys was 19 years old. He had a temporary London address (2 Osnaburgh Street, Regent’s Park), though he continued to work for mainly Norfolk patrons from his family’s Norwich address for the following three years. A precocious draughtsman, he had been nurtured and encouraged by his father Anthony Sands, also an artist. In 1848, perhaps anticipating his son’s removal to London, Anthony painted a small memorial of him, now NPG 1741. Father and son also collaborated on etching commissions in the late 1840s. There is an etched proof by Frederick of the Sands portrait, signed and dated ‘F.S. 1848’ (see ‘All known portraits, By other artists, 1848’). About the same time Frederick Sandys painted two self-portraits (Norwich Castle Museum, 1909.41.2 and untraced). There was a further flurry of portrait exchanges in 1850, when Frederick made three portraits of his father.

Anthony Sands (bap.1804, d.1883) had originally trained as a journeyman dyer but at some point abandoned his trade to become a painter of small portraits and a professional drawing master. In paintings from the late 1840s, when Anthony and Frederick worked together in Norwich, it can be difficult to distinguish between the styles of the up-and-coming son and the never very talented father.

NPG 1741 was bought by the National Portrait Gallery for £15 from the sitter’s daughter Winifred in October 1914. In 1931 one of Frederick’s first oil paintings, a portrait of his father of about 1846–7, was offered (for 40 guineas) by her sister Constance and rejected, as the sitter was deemed ‘not really of sufficient importance for this Gallery’. [1]

Frederick Sandys, by descent to his daughter Winifred, from whom purchased 1914.