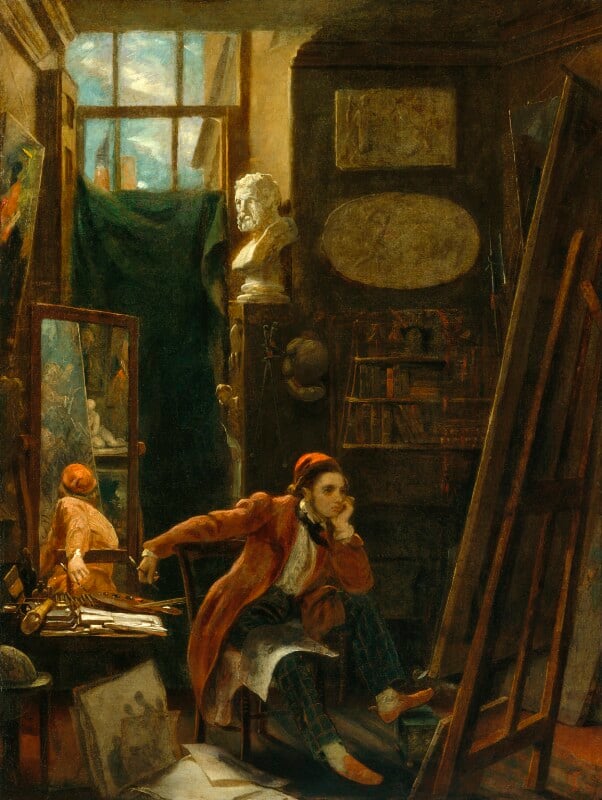 Signed in red lower right: ‘JS’ (monogram).
On reverse of canvas, inscr. in ink centre: ‘“J.Sant R.A. / a portrait of himself / by himself”’.
Label on left-side stretcher inscr.: ‘Portrait of the artist by / James Sant R.A. Principal / Painter in Ordinary to Queen / Victoria. / James Sant is Gt. Grandfather / to Jeremy Gye’.

Although evidently a self-portrait, this work is also a gently humorous subject picture, and can be identified with that exhibited by 23-year-old Sant under the title The Studio (BI, 1844 (22)). [1] The scene is set in his studio at 19 Soho Square. In a cleverly contrived composition, the artist is seated at the easel, having laid down his brushes to gaze at his work-in-progress, which is glimpsed in reflection in the cheval-glass behind him. The cramped high-ceilinged studio contains artists’ equipment, plaster casts, props and books, and the tall window is half-covered with a blanket, which directs light onto a bust – apparently representing Michelangelo –above the artist’s head. This forms a visual reference to Reynolds’s 1780 self-portrait (RA, London, 03/1394), and underlines the distance between Old Master and young painter. A further comment on the latter’s ambition is the immense height of the unseen work on the easel, together with an apparently military subject on the half-seen canvas at top left of the composition.

we see here an artist in his sanctum, surrounded by the various paraphernalia of his labours and amusements. He is seated before a huge canvas, whereon something is out of joint, if we may credit the legend in his lengthened visage. It [NPG 4093] is a picture on which great labour has been bestowed, and, in some respects, with the best results; but it is overdone with matter: the eye is distracted by the variety of objects, and the reflection of the figure in the glass is brighter – better rounded and more substantial than the painter himself – circumstances which detract from the main value of the composition. [2]

Recent commentary places the work within the tradition of the bohemian artist, comparing the work to Octave Tassaert’s 1845 depiction of a young painter peeling potatoes for a meagre meal. [3] ‘Sant shows himself neither at work nor at rest, but chalk in hand waiting for inspiration to strike, should it strike at all … the mirror also serves to emphasise the extent to which he leans anxiously forward … Sant soon shed all traces of despair but in this youthful self-portrait he created what became the archetypal image of the artist.’ [4] Further, more oblique visual allusions come in the presentation of a self-portrait within a picture, as in Velasquez’ Las Meninas, and in Sant’s pose and red cap, which loosely recall Hogarth’s self-portrait (NPG 289).

Whole-length, profile to right, seated in studio before easel, left hand to chin, right arm on back of chair, back view reflected in mirror, wearing painter’s coat and cap and check trousers, in background plaster casts, books and assorted props.

By descent from the sitter to his grandchildren James A. and Sylvia Gye, by whom presented 1959.