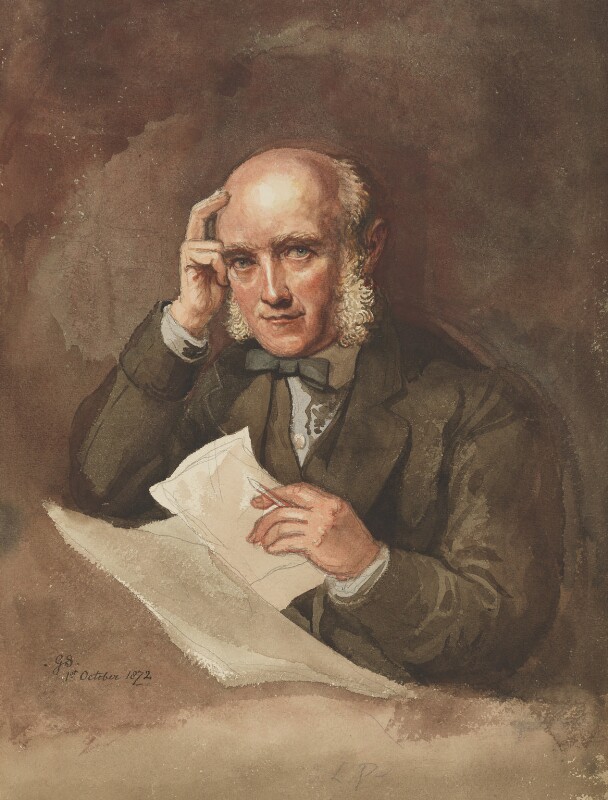 NPG 3865 is the most finished of a group of three watercolour self-portraits; see also NPG 3863 and NPG 3864. They were done on the occasion of Jacob Luard Pattisson’s marriage in October 1872; see the pencilled initials ‘J.L.P.’ below the figure. Pattisson, a civil servant, was, with Augustus Wollaston Franks, W.F. Beauford and Richard Worsley, one of Scharf’s closest friends. [1] The group met and corresponded regularly.

In September 1872 Pattisson travelled from Canada, where he was private secretary to the governor-general, to London to be married, staying with Scharf for a fortnight before the wedding. On Sunday, 15 September, shortly before his arrival, Scharf began a self-portrait: ‘Sketching my own portrait for Jack. Sitting at the desk in my front Library. The light did not fall well on my paper which was rough. & the sunlight next morning came full upon me’. Next day he ‘continued working at my sketch for Jack’. Scharf picked it up again on 22 and 25 September: ‘up early sketching my own portrait in my bedroom for Jack. Fine bright morning […] Jack came in late & we sat up chatting till past one. He seems very cheerful & comfortable.’ On 26 September: ‘At home all the morning sketching Jack (see NPG 4053(9)), & going on with self.’ On Sunday, 29 September: ‘Beautiful bright morning. […] Spent the whole day in sketching before the glass in my bedroom.’ References to self-portraiture stop after this. The wedding was on 1 October and Pattisson sailed back to Canada on 18 October. In December 1872 Scharf recalled that ‘the great event of the past year’ had been his friend’s marriage. [2]

The above entries show there were at least two poses – at the desk in the front library and in front of the mirror in his bedroom. This corresponds with the variants in NPG 3863–3865. In NPG 3865 the pose is to the left; it is inscribed with the date of the marriage, but except for the carefully worked head it is unfinished. Presumably the best version was given to Pattisson: it is now untraced. NPG 3863 and NPG 3864, also unfinished, show Scharf in the same blue shirt and bow tie but facing to the right, and are uninscribed. In all three self-portraits Scharf gives himself neat features and an alert, youthful expression which is belied by contemporary photographs.

NPG 3863–3865 were part of the Scharf Bequest to the National Portrait Gallery in 1895; they were not accessioned and moved up to the Primary Collection until about 1953. The drawings are not referred to in the Annual Report or Trustees’ Minutes for 1953 but are listed in the 1948–53 supplement to the NPG Catalogue, published in 1954. [3]

Half-length, seated to left, right hand raised to head which is turned to viewer, with pencil and paper in left hand.