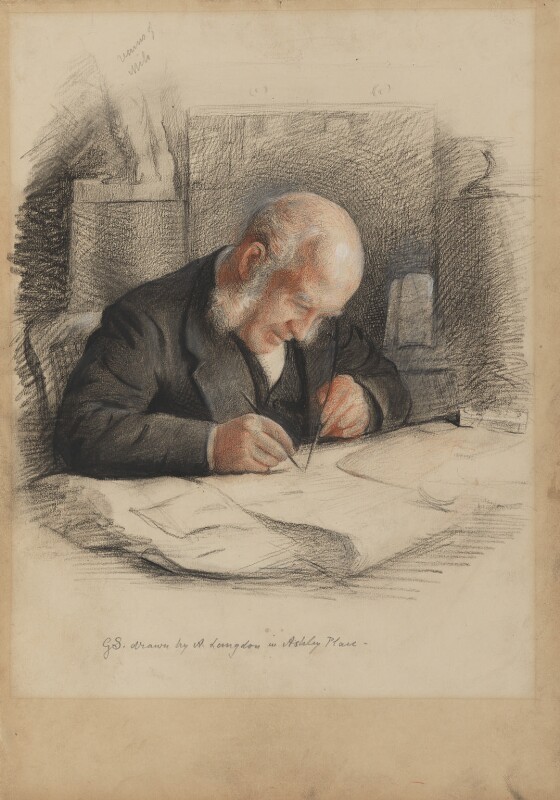 Inscr. by sitter in pencil below image: ‘GS. drawn by A. Langdon in Ashley Place.’;
and within image top left: ‘Venus of Milo’.

This drawing was part of George Scharf’s substantial bequest to the National Portrait Gallery in 1895. In 1967 it was ‘found in the NPG Archives’ and given an accession number. [1]

It had been kept in a paper wrapper inscribed by Scharf ‘Chalk drawing of GS. by Langdon. done early in Ashley Place, Victoria Street.’ [2] ‘Early’ means either early in the morning (Scharf was a keen recorder of atmospheric conditions) or, less likely, soon after the move to 8 Ashley Place, which took place in December 1869. The drawing shows him at his desk, drawing on tracing paper, a stylus pinning the two sheets together. It is inscribed but not dated by Scharf, however an entry in his personal diary for 4 Dec. 1870 confirms the date of execution: 'Langdon with me. Working on my portrait in red & black chalk'. [3]

A.S. Langdon visited Scharf regularly at Ashley Place in the early 1870s where he came to socialise and work, as recorded by the latter: ‘Langdon at work upon a miniature of Ld Arabella Stuart for Mr. [Edmund] Oldfield from my sketches’ [4]. In 1871 Scharf also sat to Langdon on several occasions for a (now untraced) oil portrait (see 'All known portraits, By other artists, 1871') and in 1872, Langdon made a crayon portrait of Scharf’s friend Jacob Luard Pattisson (NPG 4053(8)). He is otherwise unrecorded. [5]

For a description of ‘the cosy and comfortable library which is his ordinary sitting-room’ at Ashley Place, see ‘Celebrities at Home: Mr George Scharf’, The World, 28 September 1892, pp.10–11, copy in NPG NoA (Scharf).