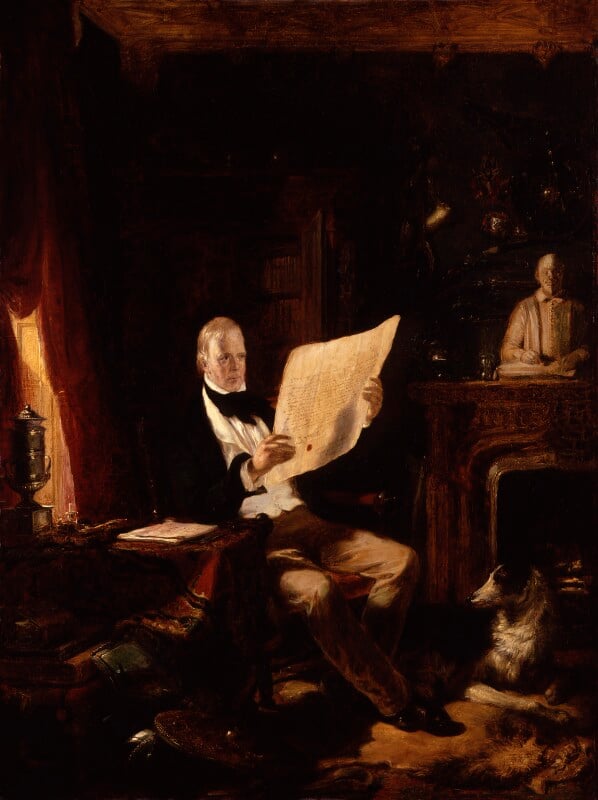 Signed and dated indistinctly on the belt in foreground, probably: William Allan Pinxt 1831 as in Burnet's large line engraving.

The picture was bought direct from the artist by Robert Nasmyth, an Edinburgh dentist and collector, for 300 guineas in July 1833 (letters in Edinburgh University Library, Laing MSS La.II.314). It is described in detail by the artist himself:

No 1. Portrait of Sir Walter Scott in his study at Abbotsford, reading the Proclamation of Mary Queen of Scots previous to her marriage with Henry Darnley. The Still Life of the Picture is painted from the originals in Abbotsford. The vase was the gift of Lord Byron; the keys hanging by the window are those of 'Heart of Mid Lothian' or Old Tolbooth of Edinburg. The Sword suspended from the Bookcase belonged to Montrose, and the Rifle surmounting the various articles hanging over the Mantlepiece to Speckbacher the Tyrolese Patriot; near the Bookcase are hung an ancient Border Bugle, James the 6th's travelling Flask, and the Sporan or Purse of Rob Roy Mcgregor. Behind the Bust of Shakespeare is Rob Roy's long gun, above which is Claverhous's Pistol and below a brace formerly the Property of Napoleon - The Stag Hound lying at Sir Walter's feet is Maida, his old favourite - William Allan 8 Scotland Street Edinburgh and 34 King Street Covent Garden (paper pasted on back of panel).
Similar descriptions are in the key to Burnet's line engraving and Christie's catalogue 11 March 1871 (47). The MS of Queen Mary's Proclamation is in the Record Office, Edinburgh (transcript in NPG). The portrait was discussed at some length in The Athenaeum, 1831, p 805, 1832, pp 227, 309, 340, and 1833, p 330.
Drawings for the head and hands of Scott are NPG 2646. The sittings are not recorded by Scott but Lockhart places them shortly before his death (J. G. Lockhart, Life of Sir Walter Scott, X, p 237). A variant at Abbotsford, signed and dated 1831, shows him reading a smaller paper and caressing Maida. Probably the original of Allan's several Scott portraits belonged to Mrs Basil Holmes in 1932 and re-appeared at Sotheby's (Hopetoun House) 16 November 1981 (700), signed and dated 1826; it was with the Fine Art Society Edinburgh in 1982 and now belongs to Paul Henderson Scott of Edinburgh who also owns a small variant on panel; it was engraved by Goodall 1828 titled 'The Author of Waverley in his Study'.
A posthumous whole-length, 'Scott dictating to his younger daughter', is at Haddo House, the pose repeated in a landscape portrait with two dogs and Lady Scott (or daughter) swooning, in Scottish NPG. Scott's portrait was used by Allan in his 'The Ettrick Shepherd's House heating' 1819 (J. G. Lockhart, Life of Sir Walter Scott, p 237).

Bought from the artist in 1833 by Robert Nasmyth FRCS and bought by the NPG at the sale of Nasmyth's effects Christie's 11 March 1871 (7).

Line engraving by J. Burnet 'from the Original Picture in the possession of R. Nasmyth Esqre F.R.C.S.', dedicated to the Duke of Buccleuch and published, with minor variations, 25 March 1835 by Hodgson, Boys & Graves (two impressions, one lettered, in NPG, both showing Allan's signature and date 1831 on belt in foreground).