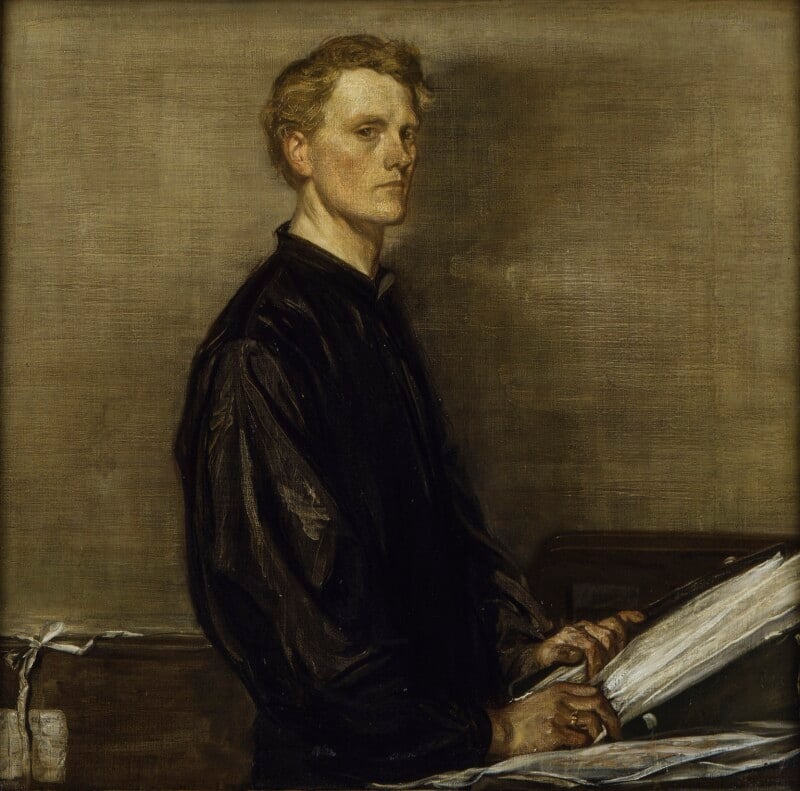 Entitled The Man in the Black Shirt, this accomplished work is a companion piece to the artist’s portrait of Charles Ricketts (NPG 3106). It shows Shannon with sheets from a portfolio, perhaps the lithographs with which his career had hitherto been concerned. He was, however, beginning to make his name as a painter, being praised in 1898 as ‘a painter of a high order who, if he adheres to oil and canvas, should develop an increasing reputation, swiftly and surely in the coming years’. [1] The sober colours of this self-portrait are Whistlerian, but the work chiefly pays homage to the Renaissance painters, notably Titian, whose work Shannon admired. It is therefore interesting that Shannon made a copy of Titian’s half-length of Jacopo Sannazaro (c.1511; Royal Coll., Hampton Court) wearing a dark garment and holding a book; the copy is now in the Fitzwilliam Museum, Cambridge (PD.183.1991).

There are hints that the work was originally destined for the inaugural exhibition of the International Society of Sculptors, Painters and Gravers held from May to July 1898 in Knightsbridge, London. Co-organizer Albert Ludovici wrote to Whistler from Paris: ‘I got four Lautrecs – which act like caviar or absinthe with the Charles Shannon portrait and others.’ [2] In the event, the present work was first shown five months later at the Society of Portrait Painters, where it received fairly favourable notice, being described as ‘remarkable’ [3] and ‘capital in every sense’. The latter critic added that the work ‘vanquishes Mr Whistler on his own ground and shirks none of the difficulties of art’.[4] The Times was more equivocal, describing it as ‘highly-interesting’ and ‘the most remarkable’ of the new works on display: ‘a little affected, perhaps, in its attempt to produce an “old masterish” effect, but full of true artistic feeling and with a quite personal element of distinction. The head, as compared with the hands, is surely a little too small.’ [5]

In 1900 it was included (as ‘L’Homme à la chemise noire’) in the British paintings sent to the Exposition Universelle (also known as the Universal Exhibition or World Fair) in Paris, which Shannon and Ricketts visited, Ricketts noting that it ‘looked like an Old Master’ within an otherwise ‘lifeless’ section. [6]

Labels from James Bourlet & Sons, Fine Art Packers, indicate that NPG 3107 and NPG 3106 were once numbered C21921 and C21920 respectively, suggesting they were packed at the same time, although no early details of simultaneous exhibition have been discovered.

Like NPG 3106, NPG 3107 was purchased by Sir Edmund Davis, and acquired with its companion through the National Art Collections Fund.

1) ‘The New English Art Club’, MA, 1898, p.227.
2) Letter from A. Ludovici to J.M. Whistler, 11 May 1898; quoted Athill 1985, p.25 n.52. Athill adds that as Shannon was represented in the Knightsbridge exhibition by just one lithograph, Ludovici’s reference must be to The Stairs by his namesake J.J. Shannon. However, Charles Shannon is specifically mentioned in Ludovici’s letter and had been recruited on to the initial council of the International Art Exh. Soc. (forerunner of the Int. Soc. Sculptors, Painters and Gravers) at the start of the year (see his Diary for 28 Jan. 1898, BL, London, Add.Ms. 58110). He and others may well have regarded the society’s inaugural exhibition as suitable for his self-portrait. In the event, Shannon resigned from the council within a month owing to arguments about fellow-members; see Athill 1985. If originally so destined, the present work was withheld from the 1898 show, perhaps at a relatively late date.
3) Daily Graphic, 28 Oct. 1898, p.9.
4) Athenaeum, 29 Oct. 1898, p.613; Whistler’s portrait of May Alexander was in the same exhibition.
5) The Times, 24 Oct. 1898, p.7.
6) Diary, 23 May 1900; quoted Ricketts 1939, p.37. Shannon (from 1905) and Ricketts (from 1907) were later on the executive committee responsible for selecting works to represent British art overseas; as such they promoted traditional values and used international shows as ‘the main vehicle for exhibiting their work’ (Delaney 1990, p.230).

Half-length, three-quarter profile to right, fair hair and complexion, hazel eyes, wearing loose black shirt without collar and gold ring with garnet on fourth finger of right hand, standing by table with sheets on portfolio stand, other portfolios glimpsed behind and to left of figure.

Sir Edmund Davis, from whose estate purchased 1942 by NACF for presentation to NPG.